This was 6 AM - 11 AM back home. My friend George Dawson just texted to say they are having a power failure there. Here street lights are flickering - but not from power failure. The ocean air rising up the mountains causes twinkling - just like the stars twinkle.

First off - we are staying in Waikiki which is a section of the capital city Honolulu - on the island of Oahu in the state of Hawaii. To make things more confusing - one of the 8 major island is also named Hawaii - although they call it The Big Island over here. 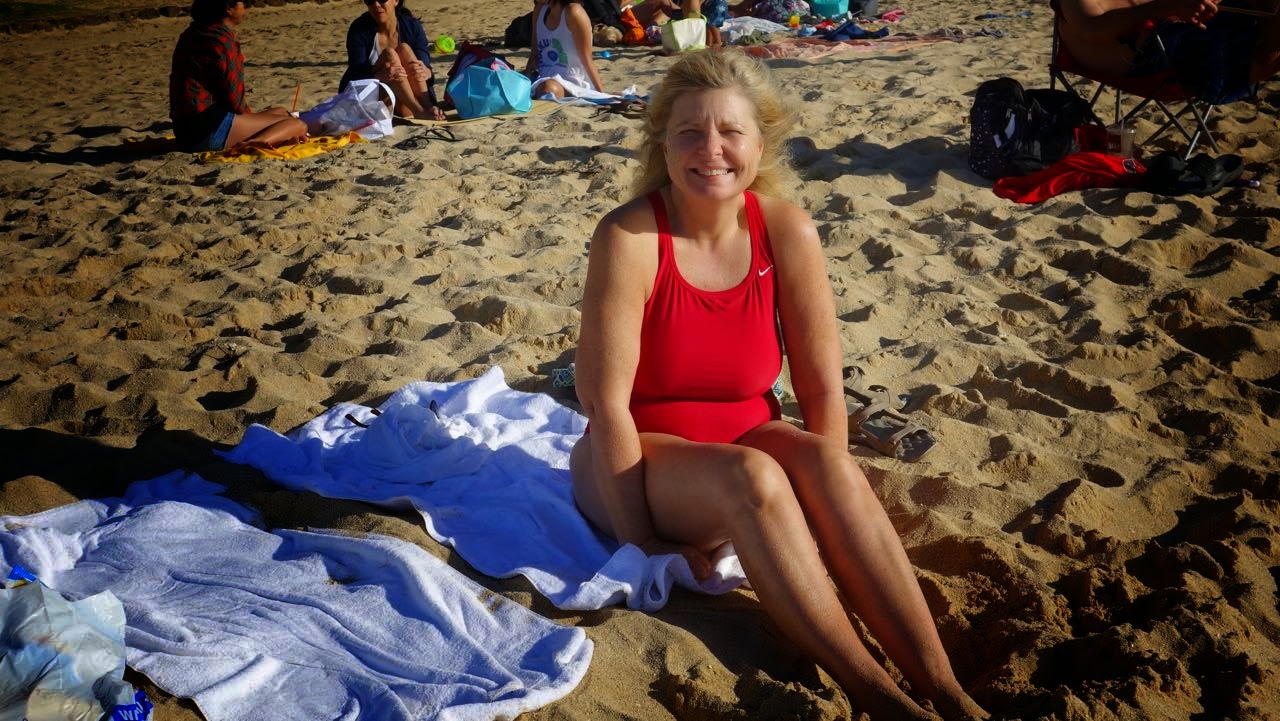 Lulu loves the beach more than almost anything at all. She has told me that she would be happy living in a shiny old trailer as long as it is on the sand overlooking the water. When she was a kid - they called her Surf - this is the girl I fell in love with at the Bungalow Pool. She was 5 when we married 43 years ago.

Astronomy - if you want to study about outer space - the biggest telescopes in the world are on the Big Island. The crisp clear dark ocean air provides a clear view of the heavens. I compare it to how much better I can see now that the doctor removed my old dark cloudy lens from my eye and replaced it with a new clear multifocal plastic lens. Because the skies are so clear here - the natives have used the stars for centuries to navigate where there is no land. Obviously - living so far from the mainland - learning about time zones is essential for communications.

Geology - The Hawaiian Islands are a line of islands made over millions of years by one hole in the earth's crust. As that hole moved due to crustal plate movement - new islands pop up like cookies squeezed from a tube. Presently - the only island that has active volcanoes is The Big Island on the eastern end. All the other island volcanoes including Diamond Head right outside my window - have been dead for millions of years.

Meteorology - Hawaii has a purely tropical climate. Yesterday at the beach is was 77 degrees and the water was 79 - in January. When the ocean breezes rise up the mountain side - they get cooled off and drop tons of rain. There are spots on this island that get over 400 inches of rain a year. Compare that to Tamaqua PA and it 40 inches of rain a year - and the 70 inches of rain Tallahassee got last year. Then there are places on this island in the west where they only get 20 inches of rain compared to places like Las Vegas and her 15 inches. On top of some of the mountains that are 14,000 feet high - there is snow right now. You can snow ski and water ski within a few miles of each other.

Oceanography - There are so many water creatures here - the state fish has so many colors and over 20 letters in its name. A large portion of their diet is from the sea. With the giant waves on the North Shore - this is the surfing capital of the world. Even the ambulance out here tows a 20 foot boat on a trailer for rescues. It is really different seeing an ambulance flying up the street with lights and sirens going - pulling a boat. It reminds me of the campers in Florida.

Every time we come out here - the University of Hawaii makes Lulu an offer to stay here as a full-time professor and teach library science. Although she loves the students here - I remind her of how much fun she has visiting the grandkids and following the Seminole sports teams. You have not experienced homesickness until you have witnessed the grief of her grandkids not coming on their Christmas visit due to the flu. She can drive 20 hours straight in a car - but I do not think she could swim 3000 miles.

Saturday afternoon was spent on the beach. The hourly TV weather update starts out by describing the waves at each of the beaches around the island. When the surf is up - the school attendance drops. 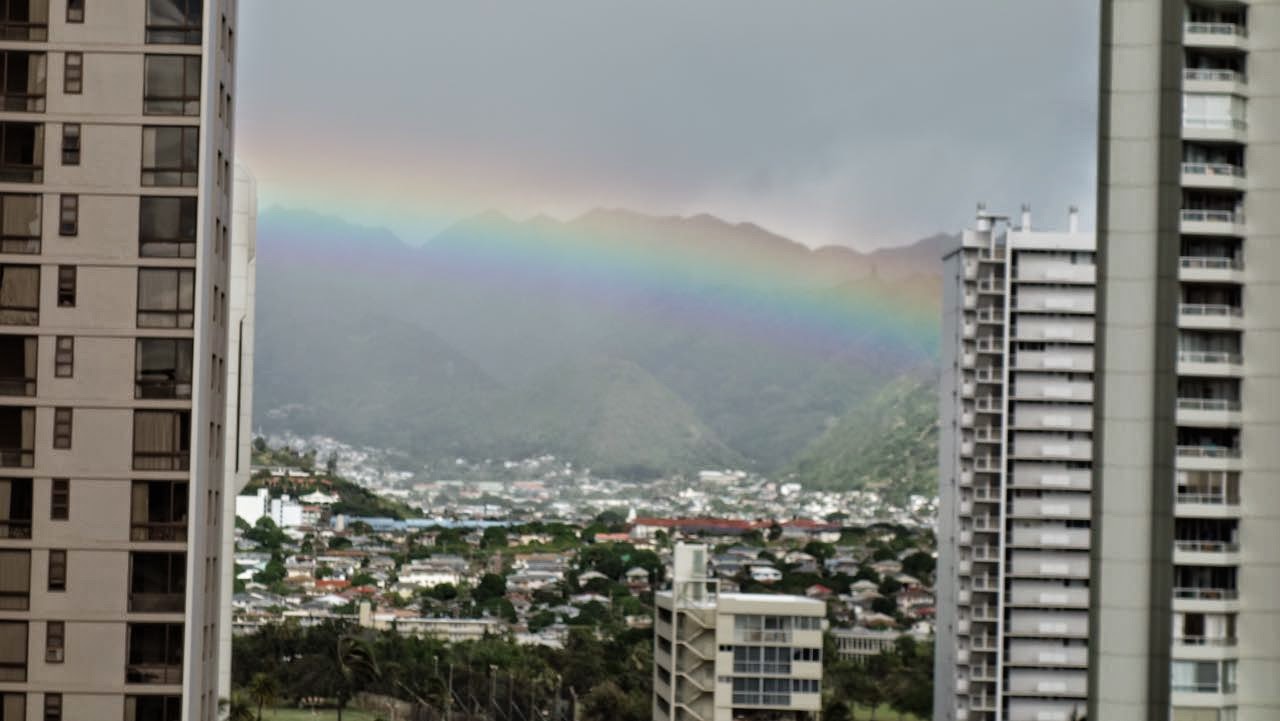 Hawaii is famous for rainbows. When the sun shines and it rains at the same time - the raindrops form prisms and you have rainbows. The University of Hawaii is back in the Manoa Valley - their teams were called the Rainbow Warriors. 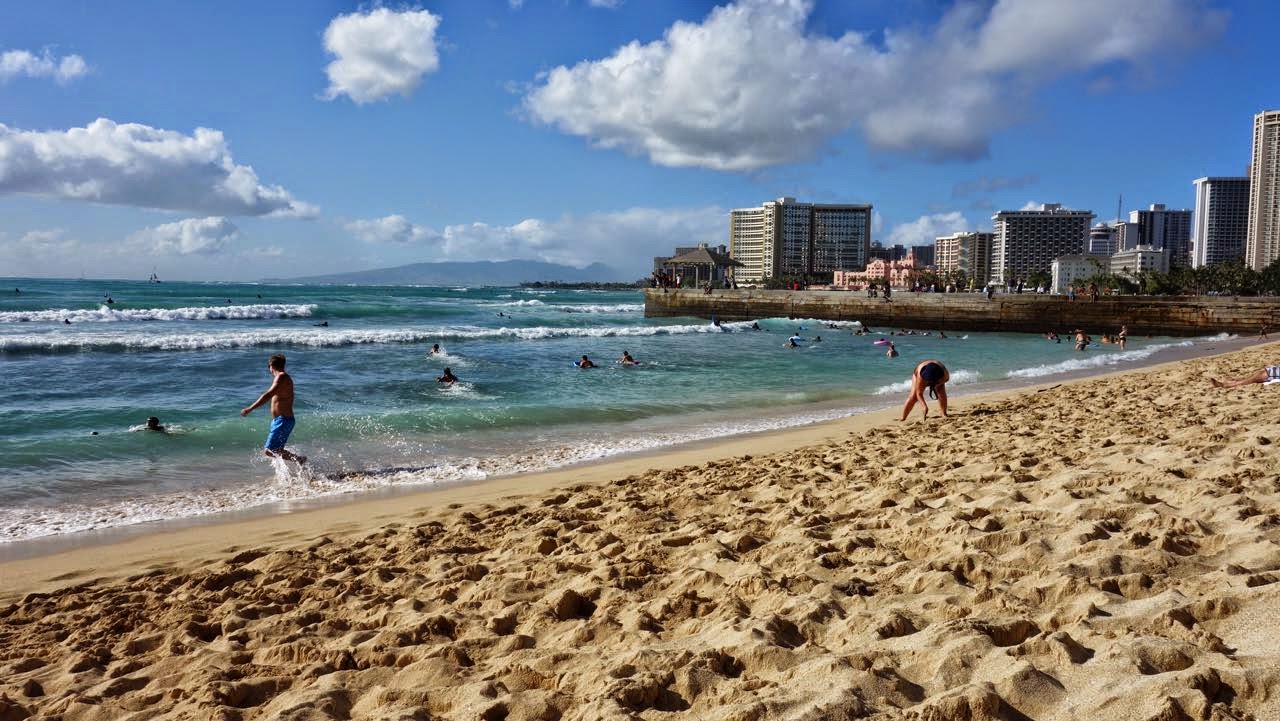 We settled on Queens Beach where the boogie boarders like to go. Water was 79 degrees - I was surprised Lulu did not hop right in. 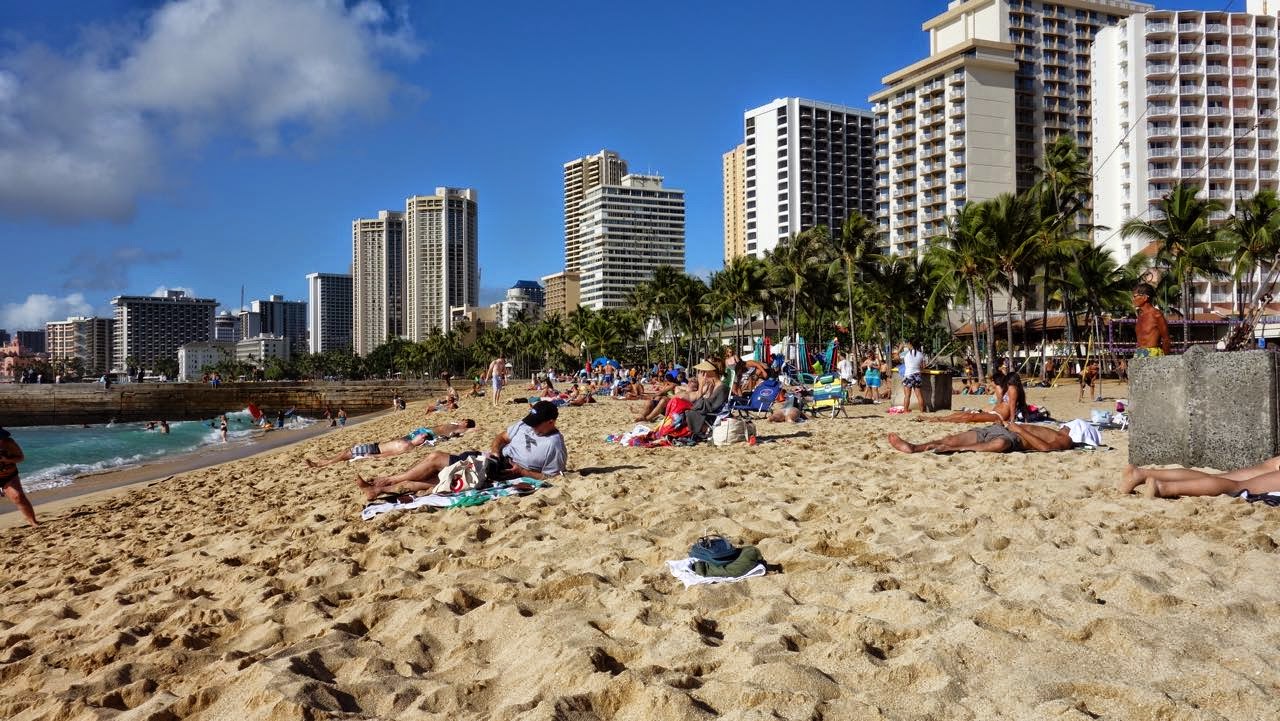 Some folks do not like Waikiki because it is too glitzy. It reminds me of the Jersey Shore except - it is warmer - the water is warmer - the people are nicer - and everything is so much cleaner and it has palm trees. Hawaii is wonderful because you can have all this - or drive a few minutes and be on a deserted beach with big waves and lots of palm trees. Another thing - Hawaii is warm all year as is the water. I am not sure if it has a busy season. 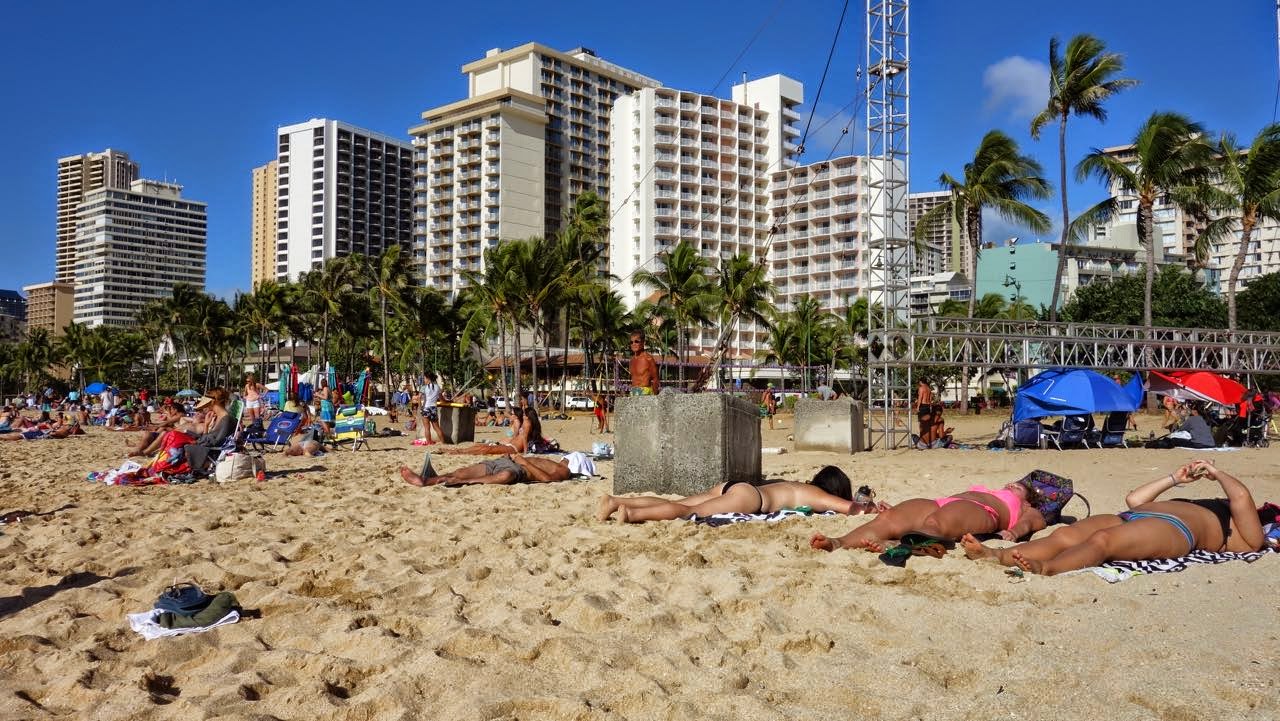 This beach is just a block from our present Hyatt Hotel. There are some homeless - but the cover charge of a $1000 plane ticket keeps much of them away. 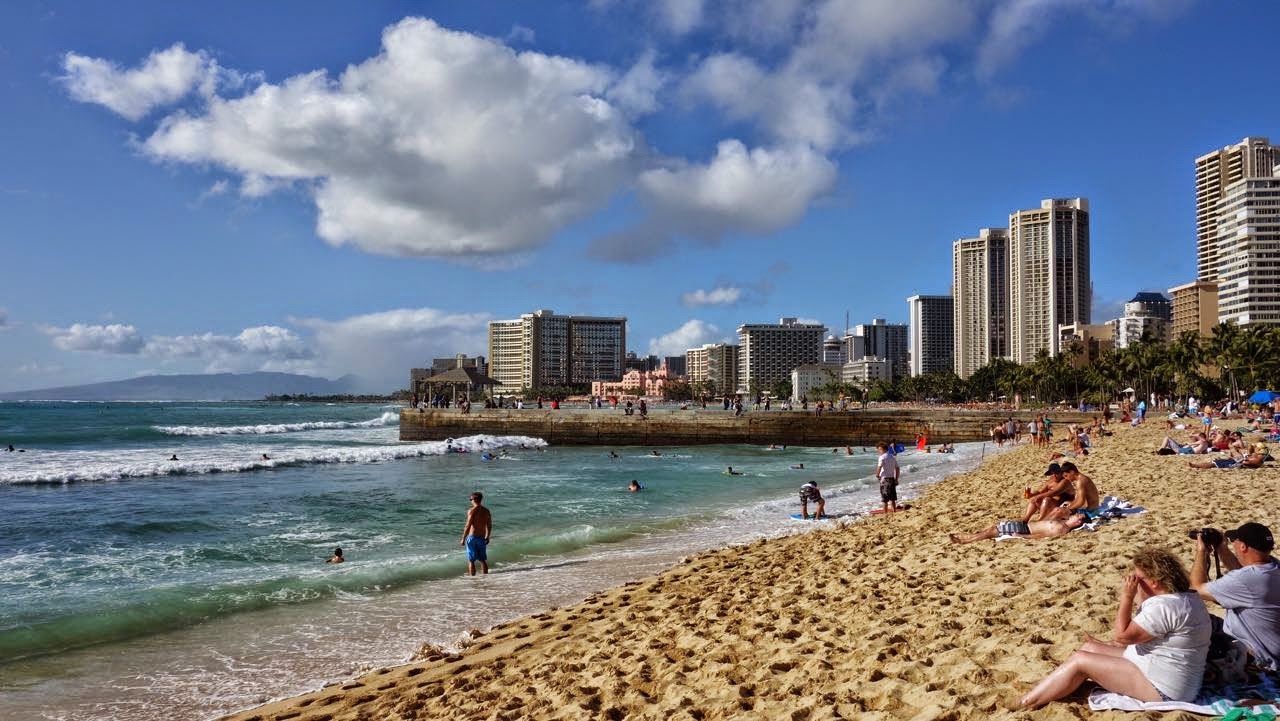 The mountain in the far background is just west of Pearl Harbor. 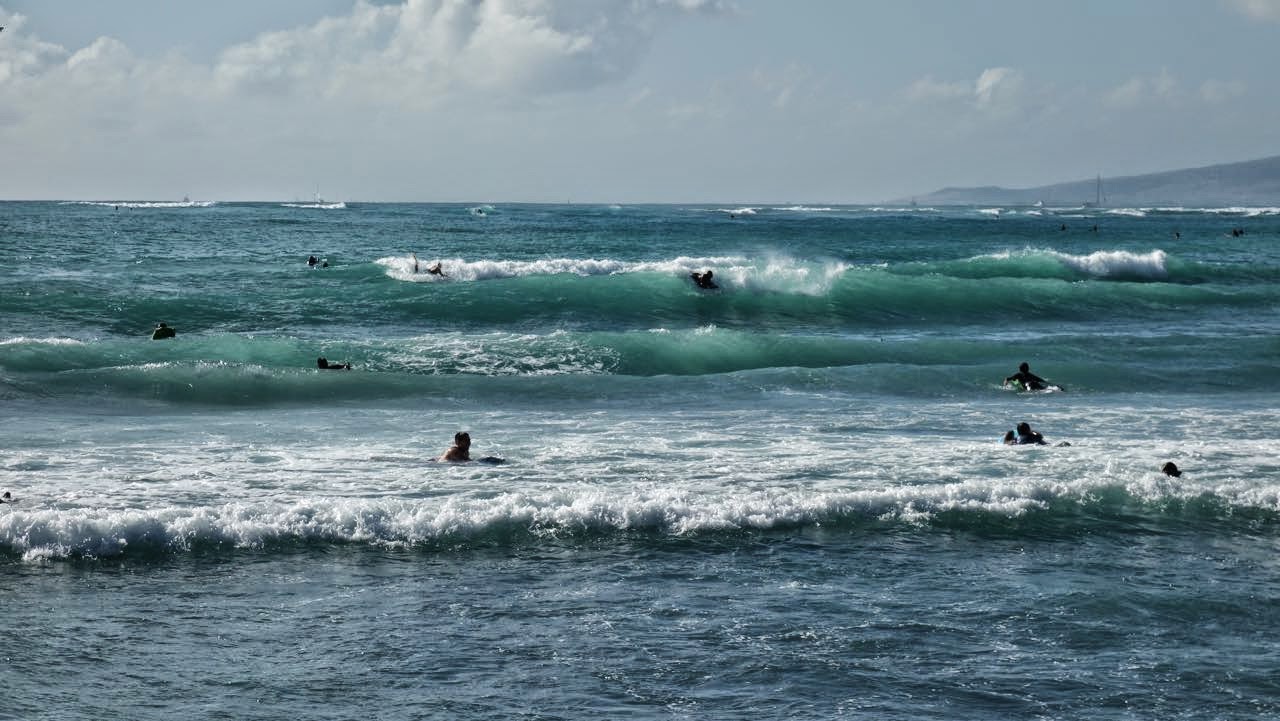 Boogie boarders were busy Saturday. Waves were 3 to 4 feet on the South Shore.