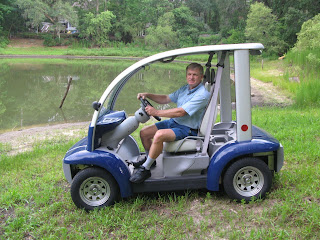 Not every day can you test drive an electric car in your own backyard. The lake is only a pond now - a shallow pond with the drought.

If you have been reading my blog - you know that I am an electric vehicle freak. I "think" it is the absolute way of the future even though I have been up to my ears in gasoline and motor oil for years.


My first car was a 1956 Volkswagen Convertible that was not much bigger than this Ford Think. I got it for $100 and it was so rusty I felt like Fred Flintstone running.


The Think looks like a glorified golf cart but if you really examine it closely you will see that it has all the safety features of a "real" car. In 2002 and 2003 - Ford was going to go into the electric car business. But some people in the front office were swayed by something - and pulled the plug. The public was upset when they started crushing all the Ford Thinks - so they stopped that action - and exported all the leftovers to Norway. I am certain they just did the destruction there.


Ford did a nice job of designing it.


The Think has three main ingredients - batteries - motor - and controller.


I took it for a nice long drive around our neighborhood. I noticed it is much more powerful than my Club Car golf cart. It has six 12 volt batteries for 72 volts compared to my golf cart's four 12 volt batteries for 48 volts. It could go 25 miles per hour versus my 16 mph Club Car. It could take the hills with ease - I even drove it down to our lake on a dirt road.


This vehicle can be licensed for the street but only streets of 35 mph or less. You can't go on super highways. To qualify for a license it has - headlights - taillights - mirrors - windshield - windshield wipers - seat belts - turn signals. It has a regular Florida title.


The car can be seen in Edwin Lott's front yard on Circle Drive just up the street form us. He is asking $3700 for it. He said he just bought new batteries.


The Ford Think was purchased first by Big Bend Crime Stoppers. It is a loosely knit group of Neighborhood Watch Clubs run by the Sheriff. Public education is a vital component in our local effort to keep the citizens of Leon County informed about their role in the battle on terrorism. Law enforcement agencies depend on alert citizens to identify and report things that seem out of the ordinary in their neighborhoods, communities, and places of business. In essence, citizens act as Law Enforcement's "eyes and ears." By working through Neighborhood Watch networks, the public can play a potentially crucial role in the detection, disruption and prevention of terrorist acts. I have a feeling it was bought with "9-11" money.


Edwin bought it at a public auction at the Florida State University Warehouse. He had it about two years and wants to get something else. 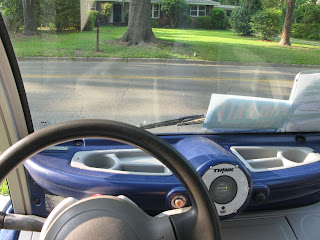 The Ford Think has a windshield and wiper. 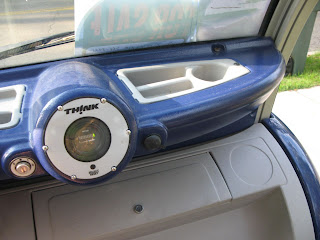 It has a gauge telling you how much battery is left. 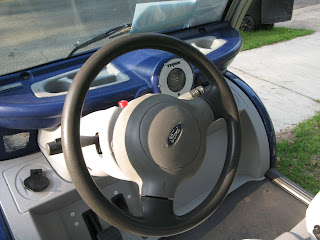 Notice the Ford logo on the steering wheel. 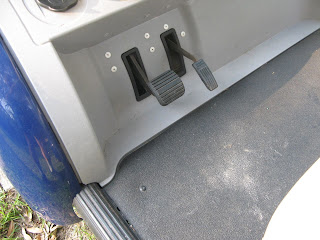 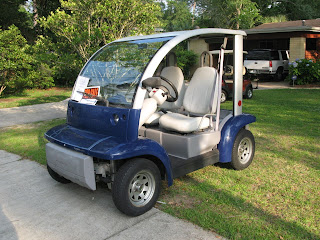 It is on Circle Drive which intersects Seminole Drive.
Written by Harry Everhart on Monday, May 21, 2012