We Got The Covid Vaccine 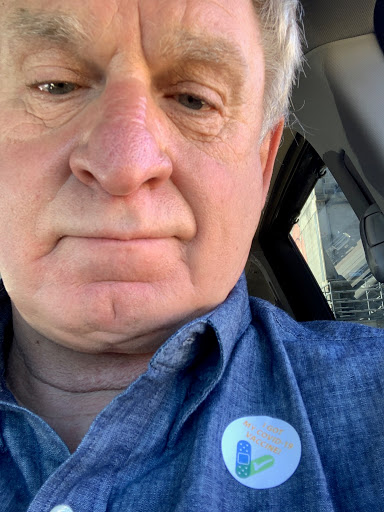 This afternoon during lunch - my friend texted me and said they are offering the vaccine at the county office. They told me the location - we hopped in the car - and away we went.
We got there at 1 PM - there was maybe 40 or 50 cars in the line. Since they were giving the shots right in the cars - there was no delay. We filled out one sheet of paper - did not produce ID - just signed the paper. They gave us the shot - we then had to wait 15 minutes in a parking lot.
The EMT staff told us to blow our horn if anything was wrong. Then they put a stickers on us and sent us home. We will go back for a booster on Jan 26th.
The shot we got was the Moderna Vaccine - it is 95% effective. It is the one that does not have to be stored at the super cold temperature.
There were no notices in the newspaper or on the radio. At first I thought it was a hoax - it came about so fast. But it was the real deal.
We are both good. Lulu is celebrating with an afternoon victory nap.
Written by Harry Everhart on Tuesday, December 29, 2020 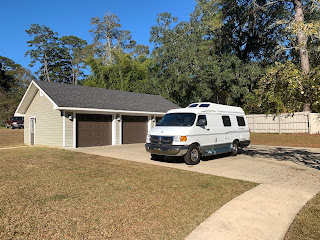 At 5 AM this morning it was 27 degrees in Tallahassee. It is already up to 40 degrees at 10 AM and will climb to a high of 48 degrees. You would not know it by looking because we have bright sun and a dark blue sky.
Since we seldom get freezing here - I did not have the camper tanks drained or the water lines bled. When I woke up at 9 - I put some clothes on and went out to check the camper. It was 30 degrees on the thermostat inside. I immediately turned on the furnace and the engine. The temperature got to a toasty 50 degrees in just 10 minutes. I turned the water pump on and tried the sink faucet - it was fine. I then tried the toilet and the shower nozzle - again fine. Lastly - I check the outside shower - it flowed smoothly.
I turned on the water heater - it fired right up - as did the generator. Finally - I turned the camper into the sun to warm it up.
Tonight - they are predicting 23 degrees here. I plan to leave the furnace on all night. The water heater will be left on too.
Some people here experienced power failures from heavy rain and wind. We were ready with our  backup power systems - but there was no need.
When we lived in Pennsylvania we owned an Argosy Motor Home. One time I drained the tanks and blew out the water lines only to have a water line break that was not drained fully. It was pain  replacing that water line. They sell a special pink anti-freeze for campers to put in water lines that carry drinking water.
We are already for a camper trip from Tallahassee to Key West right after New Years Day. We do not have reservations and plan to vagabond all the way.
Written by Harry Everhart on Saturday, December 26, 2020

People love traveling in campers. Right now during the plague - it is a great way to go carrying everything you need - safely away from the crowds. They are so many comfortable features in our Roadtrek - a bed - refrigerator - heater - stove - sink - and TV. But the feature I like more than anything is a flushing toilet. There is nothing than having a clean comfortable private bathroom. 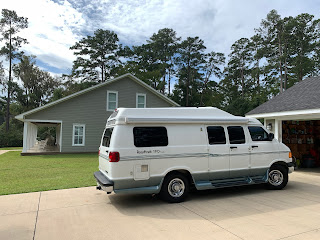 About a month ago - I bought a new toilet for our camper. The old one was 16 years old and a showing its age. It was very easy to install the new one and after it was in place - we had to have a test trip. The physician's motto is - first do no harm. The camper toilet flushed beautifully. Normally our tank system holds - 30 gallons of fresh water - 15 gallons of gray sewer water from the shower and sink - and 15 gallons of black sewer water from the toilet. We also carry 7 gallons of propane and 35 gallons of gasoline.

During the trip - the toilet was not draining normally. This usually can be fixed by going to a dump station and emptying the black water tank. I tried that and only a slow dribble of water came out. Usually it is like a 15 second torrent of effluent.

When we went home - I tried again to drain the tanks into our dump station. The gray water drained fast - but the black water was just a few drips. First I tried putting a garden hose down the toilet to flush away any debris - nothing happened except the toilet quickly filled to overflowing - yuck. I tried using a piece of Pex water tubing to act as a rake to clear the debris - nothing.

I went to Walmart to purchase a reverse flow attachment for $17 - that forced water up the sewer pipe outside - an enema if you will. This did cause more water to come out of the toilet - but nothing would flow down.

Next I decided I had to buy a pair of ramps from Harbor Freight for $33. They raised the camper 6 inches - enough for me to crawl under on my back. They were rated for 13,000 pounds - much higher than the gross weight of my Roadtrek - 8000 pounds. I felt safe under the camper - but a shop lift would have been so much better.

I examined the bottom of the camper - and figured out the layout of the 5 tanks under there. The sewer tank is 8 feet long! It is also very narrow and certainly not deep. What confused me at first was that both the gray water and black water outlet pipes came out of the same tank. There are two valves so you can empty gray water and black water separately. I then figured out the tank had a divider inside - really two tanks in one. I also noticed that I could easily removed a 4 foot section of sewer pipe and elbow - all the way up to the two gate valves for the black and gray water. It was easily done with 3 small screws. With that removed all I had left was 4 feet of pipe and one 90 degree elbow to the tank. Surely the blockage was in that last 4 feet.

Next - I bought an endoscope - a camera very similar to what a doctor uses to do an endoscopy on you. It was $35 on Amazon and wirelessly hooked up to my iPhone. I must admit it is pretty clever - you get color pictures - color video - and sound - as you explore the inner workings of your poop tank.

I used a piece of blue Pex tubing and inserted the camera and wire in the tube. It went down the hole easily and bend horizontally into the tank. The tank was half empty after sitting a night. It looked like I was in an airplane flying over clouds. When I swayed the camper a little - I could see the clouds moving. Since I tried several quarts of Mister Plumber and a gallon of detergent from the Dollar Store - the cloud must have been a toxic sludge of chemicals and toilet paper.

Next - I pushed the endoscope camera up into the pipe at the gate valve. It went in a foot and turned. I could see what I hope to see - the blockage. I could see some faint green - I use green microfiber rags to clean - this must be it. In my excitement - I forgot to take the money shot. I quickly grabbed my drill attached to a roto-rooter - one of those rotating metal worms with a hook on the end. It whirled and whirled and finally like catching a fish - it snagged and bit in. Water started to run a bit - and I naturally pulled back - setting the hook! The green rag fell out flopping on the ground like a big mouth bass.

I called Lulu to come out and see. She was relieved because she is missing a shower fluffy - and thought that may have been the culprit. She was happy it was caused by something stupid I did. When installing the toilet - I used a green rag to cover the sewer hole to prevent odors. I am guessing it fell in and I did not notice. I guess it is like a doctor leaving a sponge inside of a person during an operation.

I ran the garden hose into the toilet at full force - it flowed straight thru never backing up. Clear water in - clear water out. One last time - I inserted the endoscope to get a nice clean picture of the inside of the tank. You can easily see where the water exits through a three inch diameter hole. It is in great shape for being 16 years old.

It is fun solving problems like this when you have the time to do it - no urgency. Some problems we have are caused by others - sometimes they are just acts of nature - but in this cause it was caused by me.

On to the next adventure.