Next Saturday starts the real season when nationally ranked Wake Forest Demon Deacons visit town.........Wake Forest? Just a few years ago - Wake was the doormat of the ACC - now they are coming to town hoping they can extend their win streak over Florida State to 3-0.

Even after two big wins - FSU barely made it into the top 25 ranking. It was a beautiful day in Tallahassee - but you can tell as the camera pans all the empty seats in Doak Campbell Stadium - that the dynasty has not returned to Leon County. FSU was the team of the 90s - winning 2 national championships and being ranked in the Top 4 in the nation for 14 years in a row. Folks say that things go in cycles - right now Southern Cal and Florida are hot - FSU - Miami - Penn State - Alabama - Notre Dame and Michigan are not.

One wonders what attracted all those fine football players in the 90s to come to the hills in the Florida Panhandle. Some say it was Coach Bowden - others think that it was all the pretty girls at FAMU - some cynics think it was the fantastic shopping at Dillard's. What ever it is/was - the fans impatiently await a return to glory.

Currently - FSU is playing with a dozen players suspended for 4 games for cheating on a Music Test. The professor used the same test for 7 years and a tutor gave the students a previous test with all the answers circled. The next game - the Wake Forest game - will be the last game played before all those players return. It was ironic that last year FSU went to the Music City Bowl minus the players that cheated on the music test.

Ticket prices for the first 2 games were a joke. One could get the best seats in the house for $5 to $10 outside at kickoff. An even bigger joke are the face value ticket prices of $36 to $60 for regular season games. Needless to say - some folks are certainly making a lot of money off the sweaty backs of these amateur players. Faithful fans keep writing hefty checks for season tickets to keep their places in the stands if the Noles return to glory.

The video represents the new and the old. First a fly-by of the Stealth B-2 bomber - second - Osceola riding Renegade and planting the spear - the spear that no one fears anymore.

"A slave stood behind the conqueror holding a golden crown and whispering in his ear a warning: that all glory is fleeting."
- Gen. George C. Patton
Written by Harry Everhart on Sunday, September 14, 2008 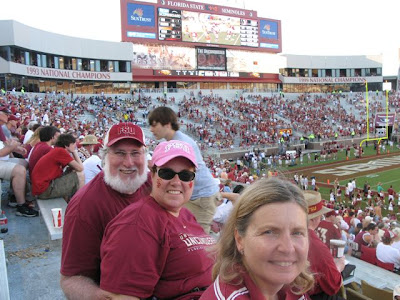 Lulu loves the Seminoles. This summer when she taught at the FSU London Center - we got to meet several of Lulu's former and future students. Pam Smith is one of them. For the last two years - Pam has been a scholarship student in Lulu's Project LEAD. This is a program funded by a three year grant by the feds that offers 30 students to become leaders in the school library/media profession.

It is always fun seeing people enjoying their first football weekend in this beautiful capital city. Pam and her teacher husband Paul really went overboard in their first shopping trip to the FSU Bookstore. They in are in full Seminole regalia in the picture above.

Early this morning - they started their 4 hour journey back to Clearwater where they both teach and live. Not one hour down the road - we received a call from Pam. She proudly announced that she is applying to the doctoral program at FSU which she will start when she graduates from Project LEAD in August. Welcome aboard - Pam and Paul.
Written by Harry Everhart on Sunday, September 14, 2008 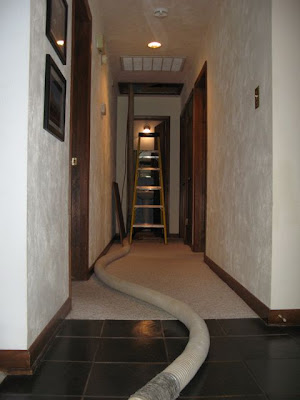 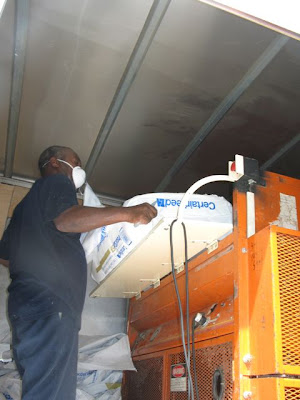 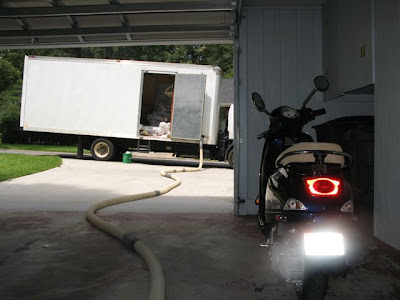 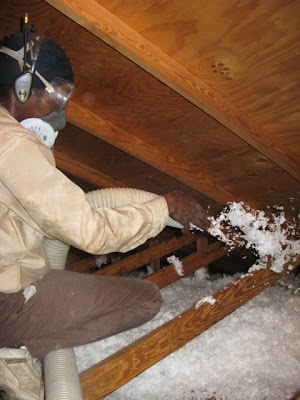 In London this summer - while Lulu was teaching for FSU - I was enjoying reading the local news in the gossip tabloids. Besides reading about soccer and looking at the nude girls on page 3 - I read a story about Mick Jagger turning 65. Mick must have made a deal with the devil - because he is in perfect shape and hasn't aged a day in 40 years. Back in 1965 - Mick and I both weighed 130 pounds. Now he still weighs the same and I nearly doubled in size - Lucifer must have been good to him.

The article about Jagger went on talking about his wealth. He is worth 225 million pounds (almost a half billion dollars) - but he still qualifies for a $180 a week pension and free insulation in his home.

I consider myself a bi-polar political personality. My fiscal side is conservative - always balance the budget - never spend more than Lulu earns - everyone should be taxed fairly. My social side is very liberal. I do not care who marries who - who sleeps with whom - no censorship - and equal right for the sexes - races - and choosing who you can love and care for.

Like many people - I went to free public schools - ate surplus government food - got scholarships to state universities - got government student loans - received special mortgage benefits - got my taxes reduced by a homestead exemption - live off a state teacher's pension - am almost at social security age - considering medicare - and my medical insurance and drugs are paid for by by former government employer. Now that I am a senior citizen - I think I am entitled to real estate tax exemption - and I want all the kids to kick into social security so I can loaf into the sunset.

But what really takes the cake - like Mick Jagger - I qualify for almost free home insulation. While on my daily walk - I noticed a neighbor getting insulation blown into his house. He told me that the city will do a free energy audit of my home. If they think I need insulation - they will put it in almost free of charge. The city pays 80% of the cost.

I am always looking for a deal. I called the city. They sent an expert to my house and he deemed that I needed more insulation. He said that my old "ground up newspaper" insulation was next to worthless. He wrote up a free estimate that gives my home an R-38 rating - that is good. I signed the papers.

A week later the insulation men pulled up. The truck was full of bales of fluffy stuff. They ran a big hose into the house and started pumping the stuff into my attic. It piled up to about 16 inches deep. The fellow handling the hose said he was doing this for 22 years. He told me that many people do not take advantage of the offer because they must pay about 20%. the job was done in less than 2 hours. They left the house neat and clean.

It may be my imagination - but it seems like my air conditioner runs a lot less. It also seems much quieter in the house. The expert claimed that I would probably get my $200 back on my power bills in 6 months.

The whole project is justified by the power company cutting down peak demand of electricity - so that they will not have to build as many power plants.

There are "green" people - folks that like to conserve power to "save the planet." Then there are "GREEN" people that just like to conserve money. Which category do you put Mick and me? Call the city and join in. You qualify at any age.
Written by Harry Everhart on Friday, September 12, 2008

Thanks to computer scanning technology - one can now buy and sell tickets on-line electronically. In an effort to control counterfeit tickets - each ticket is printed with a bar code that is scanned by an attendant as you enter the stadium. If two people have tickets with the same bar code - the first one would be able to enter the stadium. The second ticket would be stopped because all tickets are tallied by the computer immediately. Each ticket attendant's scanner is wirelessly connected to the main computer.

Fans can also buy and sell surplus tickets at seminoles.com. They can print out the purchased tickets on their computer printer at home.

The State of Florida recently passed a very liberal "ticket scalping" law. It is perfectly legal to buy and sell any tickets at whatever price the market will bear. This law - based on supply and demand - has made ticket prices in the secondary market much lower because people are not afraid of being arrested for buying and selling tickets.

With fans being able to buy and sell surplus tickets on the seminoles.com site - I expect that ticket prices will be even more stable. With supply and demand though - and during a championship season - prices would rise.

Plenty of Seminole football tickets were posted on Craigslist.org with prices below face value.

During yesterday's Western Carolina versus FSU game - Wayne and I were able to purchase four seats together - on the 20 yard line - on the shady home side - for $15 each. Unfortunately - the entire stadium was in the "shade" for the game which was delayed several times for lightning.

Pictures - by the time this pictures was taken - Shirley had already gone home - we raided the garage bag stash in the men's room - and we were back at our car after two lightning and downpour delays. In 10 minutes - we were back home falling asleep to the extended game. FSU won 69-0 - while we slept. 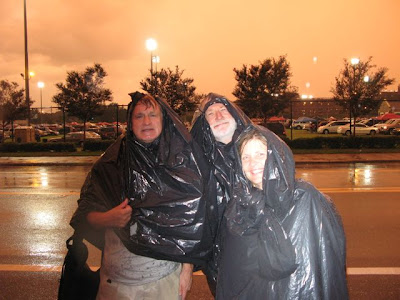