Powering Your Home With a Nissan Leaf Electric Car 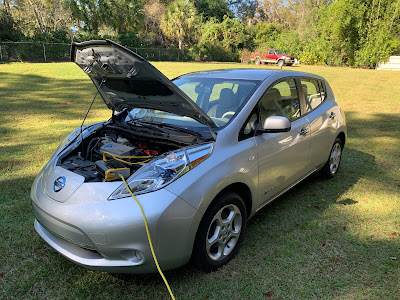 This is my 2012 Nissan Leaf with inverter hooked up

I have a 2012 Nissan Leaf electric car. It has given excellent service for 8 years. When it was new it had a range of 70 miles on a charge. Now that the battery is getting tired - it only gets about 45 miles on a charge. It is a great in-town car - but I would never take it on a long trip.

In Florida - we have lots of hurricanes that blow down trees and cause power outages. When Hurricane Michael came by recently - it knocked out our power for 8 days. I was able to power our house with a Honda 2000 natural gas generator. It did a great job running 8 days straight - it reminded me of the Jewish Menorah - 8 crazy nights. The Honda generator is very quiet - but it is not silent.

I have often wanted to buy Tesla Powerwall battery. Very simply - it is a big $6000 battery that charges during normal times - and when the power fails - you can use the battery to charge your home. It is an expensive luxury - and when combined with solar panels you can power your home for free. I recently had a quote done on my home for solar panels and a Powerwall battery - it was $27,000! I passed.

Then I thought to myself - my Nissan Leaf has a giant 650 pound battery in it. It can hold 24 KWH at 400 volts. Surely that could partially power my home in an emergency. It also has a 12 volt accessory battery. The big battery reduces the voltage and keeps the little battery charged when the car is turned on.

I thought that I could use the 12 volt battery - connect an inverter to it - and produce about 1000 watts of 110 volt AC power. The big battery would keep the small battery charged a long time.

I pulled the car up to the house - hooked the 1100 watt inverter to the small battery. I turned the system on and plugged a lamp into the inverter - and the light went on. I felt like Thomas Edison. Eureka! So far so good. But the light uses less than 10 watts of power.

When I started at noon - the mileage gauge on the Nissan Leaf read 36 miles of range. All afternoon I was watching the gauges - making sure no warning lights or beepers were going off. I felt the battery - inverter - cords - gauges - to make sure nothing was getting hot. The little cooling fan on the inverter did not even cycle on and off. This was too easy.

The gauge would show the refrigerator drawing as little as 10 watts and as much as 200 watts. Of course when the compressor came on - there would be a surge. The inverter is rated at 1100 watts - but can produce 2200 watts for short surges.

I love my old Nissan Leaf. It is a fast - nimble - quiet - and smooth car. But the range has dropped so much - it is just good for short errands of 45 miles or less. It cost $42,000 new - but now the books says it is worth just $5000. A new battery is $6000 - so I am not going to invest in that. I am 72 and have three other cars. Lulu loves driving the Leaf to campus - when we are in normal times. It is excellent for going a few miles and letting it sit all day - then driving home. I have a trailer hitch on it and pull my little trailer around our property doing yard work. It has gobs of torque.

At 10 pm - the mileage gauge had dropped from 36 miles down to 31 miles. It used 5 miles of range to run the inverter and refrigerator for 10 hours. If you extrapolate that out over 45 miles of range - it means it could run the refrigerator - a few lights - TV - computer - phones - for about 90 hours - almost 4 full days.

Lulu requested that I shut it down for overnight - she said I proved my point. She worried it would fail at night and thaw her food. She was such a good sport up to then - I packed everything up - plugged the refrigerator back into the wall - and wrote this story.

During the next power failure - in Florida we are always assured there will be a next one. Instead of striking up the Honda generator - I will start off using the Nissan Leaf to power my home. I also have a generator in my motor home that produces 2800 watts of power - but if I used that - I would not have thought to write this story. 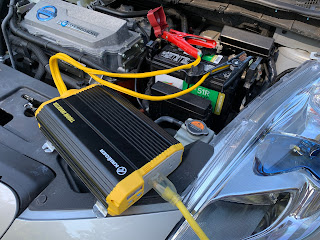 We Replaced The Toilet In Our Camper 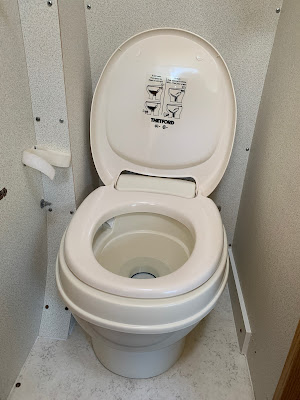 This is the new Aqua Magic V installed 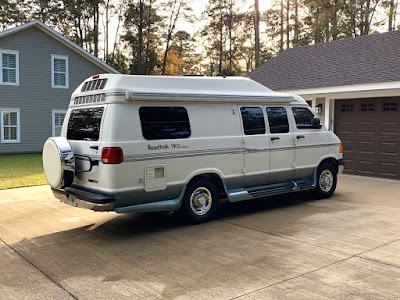 This is our 2004 Dodge Roadtrek.
Today I replaced the 16 year old toilet in our camper. It still worked fine - but rather than just replace moving parts - we chose to install a new unit. 16 years is a longtime for a lightweight plastic unit.
The old toilet was a Thetford Aqua Magic IV. We searched on Amazon - and they offered a Thetford Aqua Magic V for $135. The main difference was that the newer model had a hand flush system - the old one had a foot pedal flush. Other than that they are pretty much same.
First I took the old one out. It only had two nuts to remove with a ½ inch wrench. The water supply was simply twisted off by hand. When I lifted off the old toilet - it exposed the old rubber gasket. It installs just like a toilet in your home - but it is much lighted due to being made of plastic. You can lift the toilet with one hand.
When I fit the new one into the space - I noticed that the water supply hose was about one or two inches short. I had to lengthen the water supply line.
After that it was a simple plug in the old one - fasten the two brass nuts - and twist on the water supply.
Before I tightened everything down - I turned on the water pump to see how it worked. There is not a lot of room in the toilet closet - so you had to take your time tightening everything.
I am really happy with the results. The old foot pedal worked fine - but the handle control seems more precise. You can flush and add water while you are sitting. 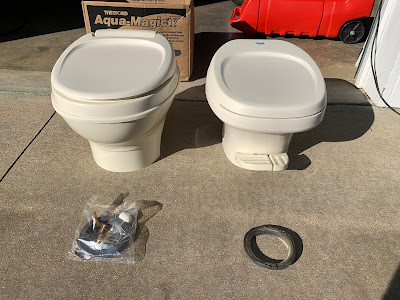 The new toilet on the left - the old one on the right. It came with gasket and bolts. 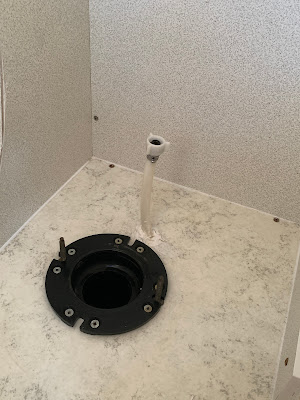 Here is the water supply and sewer flange 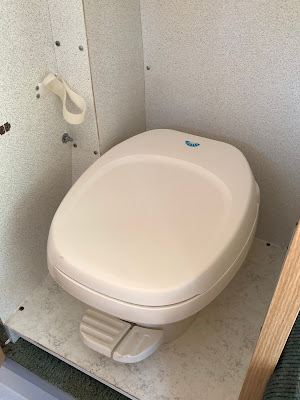 The old toilet had pedals and was a little lower 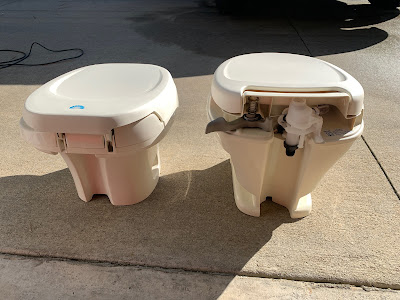 Notice the new toilet has a higher water inlet 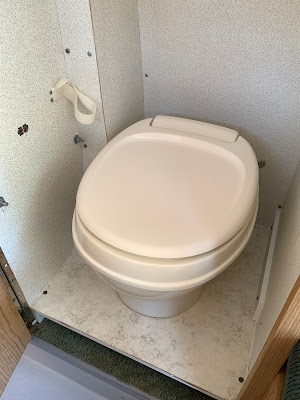 It is a nice clean installation 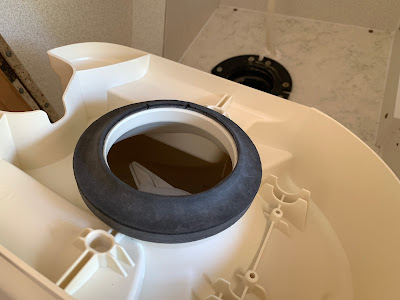 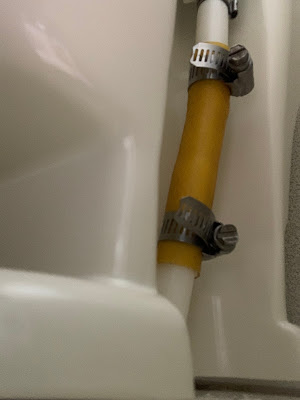 I added a small piece of hose to the water connection.
CAUTION - ON THIS JOB I ACCIDENTALLY DROPPED A MICROFIBER CLOTH DOWN INTO THE TOILET TANK. IT WAS A REAL HARD JOB TO FIGURE OUT WHAT HAPPENED WHEN IT BLOCKED THE TANK. I FINALLY GOT IT OUT - THAT IS ANOTHER STORY. WE ARE VERY CAUTIOUS NOW ABOUT WHAT WE PUT IN THE TOILET.
Written by Harry Everhart on Saturday, November 14, 2020