Free To A Good Home 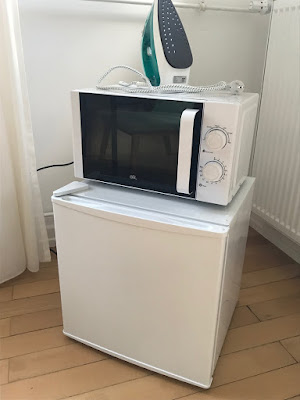 We bought these appliances to have in our apartment on June 1st. We were too lazy to walk down to the common kitchen to cook. We also like having breakfast before we dress.

We are leaving Darmstadt - Germany today - Friday at 3 PM.

Later Note - We gave them to a couple from Wisconsin who were living in the apartment below us.

911 - The Date Has A Different Meaning For Darmstadt

One month ago we drifted into Darmstadt on a bus. We caught a cab at the station to our home for a month. We knew very little about our new town - I first heard its name when Lulu said she would be teaching there. Wikipedia said it is called the "City of Science."

On September 11th 1944 - 226 British Lancaster bombers firebombed the city. 13,000 people died - 110,000 were left homeless. The new technique was simple - they no longer picked out targets - the planes just spread out and bombed everywhere - causing a firestorm - that swept through the city. By this time - all the major cities were in rubble. The Allies were simply trying to terrorize the Germans into surrender. Simply - this was terrorism. The Nazis held on until April 30th 1945 when Hitler shot himself.

Ironically - there was a street party our first night in town - and now on this last night there was another one. There was lots of good food - drink - trinkets - and rides. Germany is a booming country - and has lept past many countries to be near the top of the pack in industrial nations. Some say they are the new leader of the free world.

Lulu had a fantastic time teaching here - they invited her back again for next summer. She had many more men students than she is used to.

The students here really are sick of hearing about the Nazis and the past. They abhor a rising NeoNazi minority that wants to praise the past and racism. They seem to love everything American - music - clothing - movies - cars - and sports. It is cool to wear American shirts of sports teams - computer games - etc. The uniform of t-shirts - jeans - and sneakers thrives. They appreciate the gracious treatment of the Americans versus the harsh treatment of the Russians. American did not lose 20 million people in the war like the Russians.

Germany has risen from the ashes - thanks in part to help from the Allies. Germany lost so many men to the war and prisons after the war - women were mainly responsible for cleaning the country up. There are artificial mountains of rubble over here. But many of the historic buildings downtown were restored to pre-war style.

Today at 2 PM - we will walk out of our apartment house - each of us wheeling one bag to the trolley - about 1/4 mile away. The trolley (2 euros) will go to the train station - then we catch a bus (4 euros) to the Frankfurt Airport. We will fly with Scandinavian Airlines to Copenhagen - Denmark. Keith and family will be waiting for us there at an AirBnB house. No work for Lulu for this week. Family time with Max.

Yesterday Nancy was teaching her last German class. So I needed something to fill in the 4 hours while I waited for her. So I drove about 15 miles east to the Main River. On the other side - in Bavaria was the town of Aschaffenburg - the home of the Schloss Johannesburg. A schloss is another name for a castle - usually one that was more like a country palace - that was later turned into a home.

Schloss Johannesburg was built in 1605 for the Prince Bishop of Mainz. It was his second residence - his main one being in Mainz - about 60 miles west. For two hundred years it was used for that purpose. It was built with taxes from his fief.

The building is symmetrical with a large central square - and four corner towers. It has a strategic view of the Main River. It is on the bend of the river where its canons could control any ships coming or going. It is built of local red sandstone - giving it a very distinct appearance as it rises out of the surrounding city. Today - it is the center of a thriving tourist trade. There are plenty of support shops downtown serving the visiting tourists. It is a stop for tour buses - and river boat tours.

During World War II - the castle was burned - and anything not hidden away was destroyed. There is an effort to try to furnish it with period pieces - but there are so many rooms - and so little furniture. The top floor has been made into an art museum. A collection of large cork building covers 4 rooms.

I had the places pretty well to myself. There must have been 10 guards on duty to prevent little old me from taking pictures of anything. Some places in Germany let you take all the pictures you want - other places treat your cameras like flame throwers. Sometimes the guards just seem to need something to do. So they warn tourists - no photo.

It is amazing that these castles still stand - some date back 1000 years. You wonder how they survived all the turmoil. Surely they can stand a few iphone pictures sans flash. I used to have a pair of glasses that took pictures - but the quality was poor. I am on the market for a better pair.

A 3 euros admission was charged for the top floor museum. You can walk around the rest of the palace for free.

The Legend of the Full Moon Over Frankenstein Castle

There is a legend that if a married women goes to the Frankenstein Castle and has a drink on the night of the full moon she will return to the feelings of her wedding night. When we arrived in Darmstadt a month ago - we visited the castle - then we read about the legend. So now it is the end of our month here - and we were sure to return tonight to see the full moon.

We had dinner as the sun set in the west - on the other side of the mountain we watched the full moon rise. What  a beautiful night it was.

Tomorrow I return the rental car - Friday we fly to Copenhagen - Denmark - to meet up with Liz - Keith - Max. We will spend a week together there - then we will all fly to London together for another week.

Lulu's last gig is teaching a course for FSU in London.

Frankenstein Castle has been here for 500 years. Around 1815 - Mary Shelley visited the area and heard a story about a doctor that lived there and experimented with body parts. He discovered a magical oil that was supposed to bring things back to life. Today - the castle is just ruins - mildly restored. It is a very nice visit after a zigzagging 2 mile road to the top of the 1200 foot mountain. You have a beautiful view of Darmstadt - Frankfurt - and the Rhine Valley.

There is a nice restaurant up there open until 10 PM. We had a very nice dinner - drinks - and dessert - and barely broke 30 euros. We ate on a sun soaked stone deck - with a brilliant sunset. 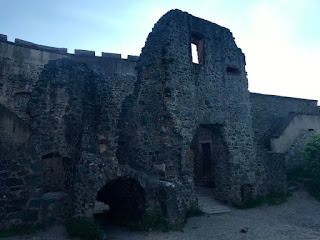 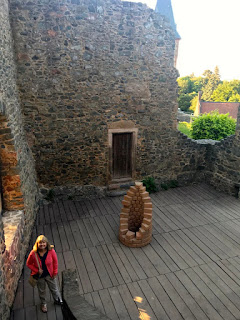 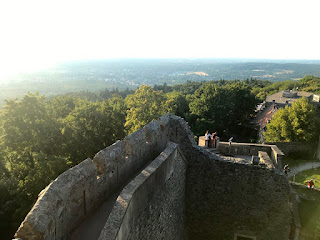 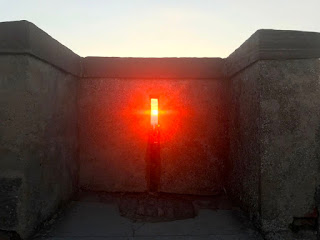 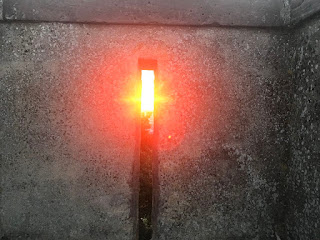 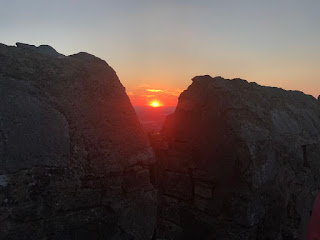 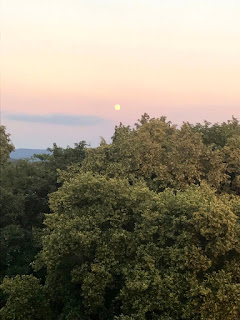 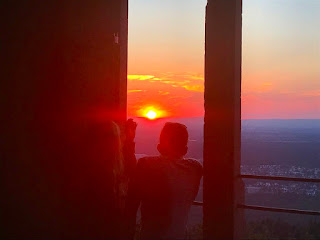 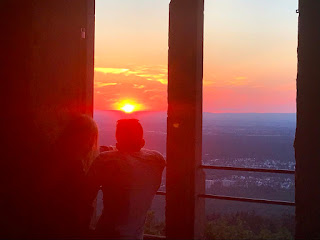 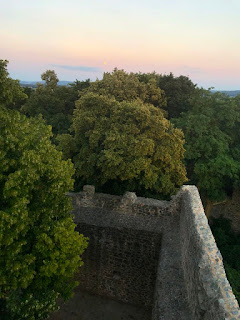 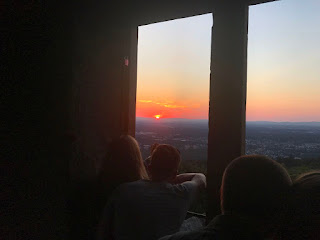 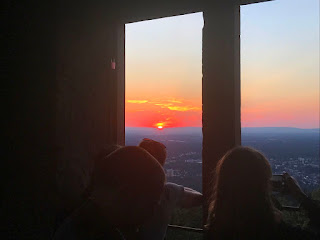 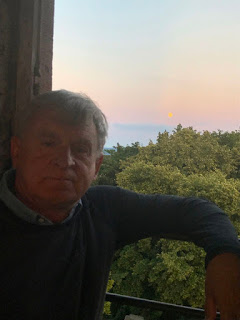 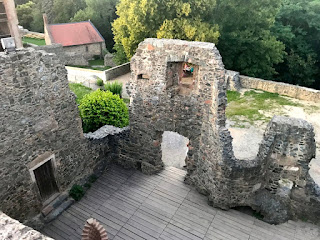 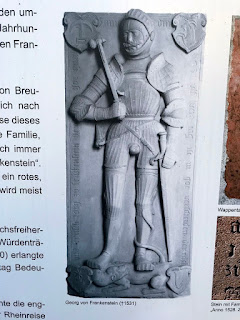 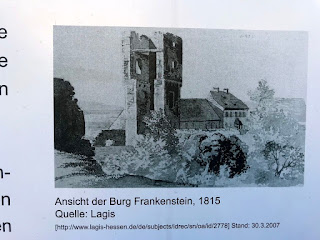 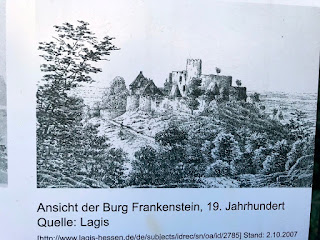 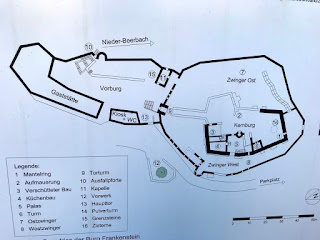