Ben Turrano lives across the street from Lulu's old homestead. Ben and his brother Mike were my students in 7th grade. Ben loves old car - planes - boats - trains - and buildings. Ben is a Renaissance Man. He is an admission counselor for the local community college. He also worked as a Realtor and a haberdasher at Ted Block's Clothing Store. But his real love is restoring cars and buildings. He can wield a hammer or a wrench as good as anybody.

OWL CREEK RESERVOIR - A couple years back Ben salvaged an old cabin from his childhood camp. They cut it up into pieces and moved it to the Owl Creek Reservoir. There they assembled it like an erector set. They added a metal roof - a deck - and paint. It looks great. 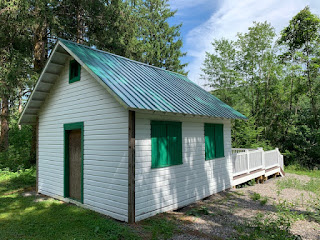 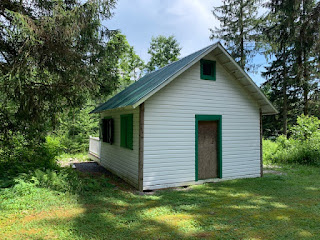 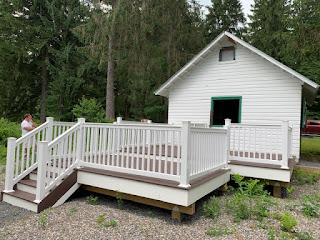 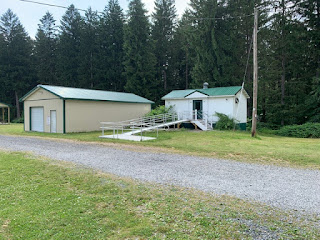 When I was a kid - Owl Creek reservoir was the water supply for downtown Tamaqua. Later is supplied the Atlas Powder Company. Today the reservoir has been drained and restore. It is now a recreation site for the town. It was being used by the Boy Scouts when I visited. I met Chris and Mike  Conville. They are now adults with kids of their own. It was fun getting the VIP treatment from them. 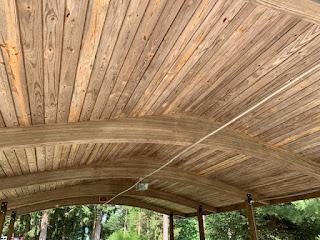 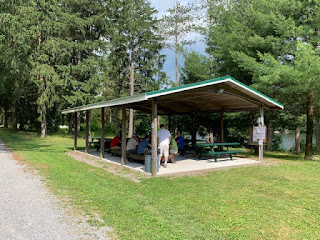 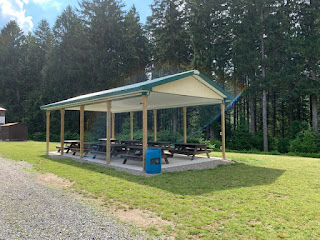 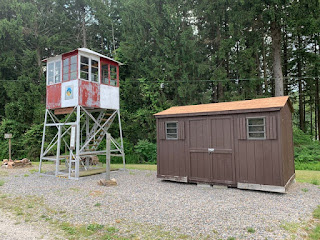 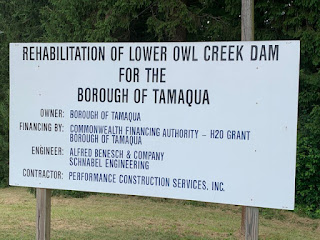 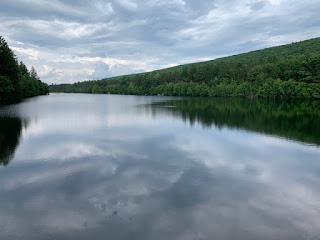 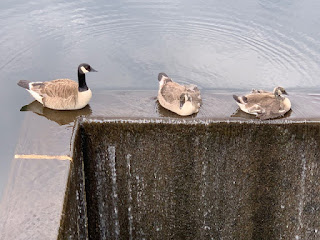 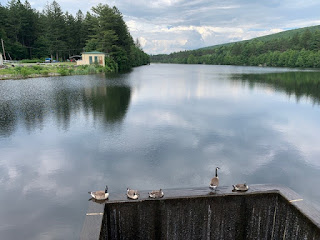 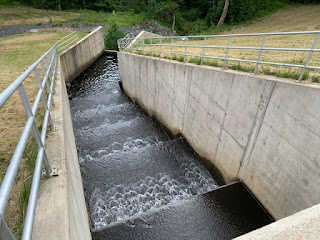 MIKE TURRANO'S GARAGE - Next we went to visit Mike Turrano. Mike lives by the White Birch Golf Club. He has a 10 acre farm - but also two big garages full of wonderful relics. The first order of business was to pay Mike a $2 bet I owed him. When Mike was in my classroom - I bet him $2 that he would have a car wreck in the first year of driving. I cheated a little because I knew statistics that 80% of 16 year old drivers get into a fender bender at least once. I had two or three. Mike assured me that he would never wreck. He didn't. I believe him - and I am happy he didn't. I made that bet with many kids - and have seldom paid off. 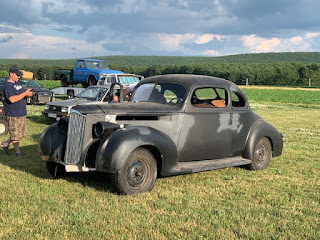 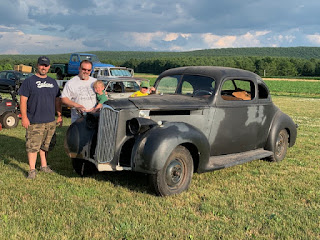 Mike was in the middle of a 1938 Packard restoration. Then someone saw it and offered him $8000. The guy was picking it up today. I guess he saw no harm in offering me to drive it - and I was ecstatic. It is a flat head 6 with three speed on the column. I drove her down the road - and Ben was amazed when I did a double clutch to shift it into first gear while moving. He never saw that before - and I was amazed I didn't "grind me a pound." The new owner plans to remove that engine and put a high performance V8 in it. 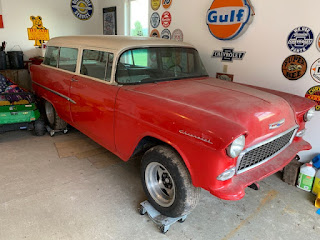 Mike also had this beautiful 1955 Chevy - two door wagon - not a nomad but more of a work versions. It is presently a lovely painted body with no engine. 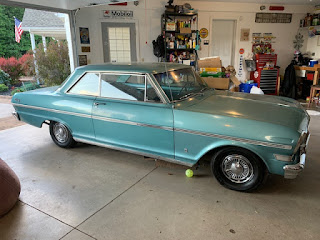 How about this 1962 Chevy II Nova in excellent shape. 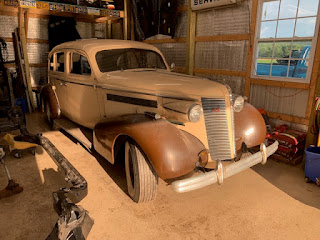 The 1939 Buick is Ben's. His grandfather gave it to him on the condition that he gives it to his grandson.

Time flew by. It was time to go home. What pleasure it is meeting my old students as men - with families - jobs - homes - and dreams. It makes me feel that my life was not wasted. Each one of my students could rattle off about 10 quotes from my classroom. We laughed until I nearly cried.

We flew the drone - took some pictures - but that it for another story. We have 4 days left in coal cracker land.


We just spent night number 29 in our camper in Tamaqua PA. It is our 49th anniversary today and also Lulu's Mom's birthday - so today we will celebrate both at the Tamaqua Train Station Restaurant.

This has been 6 straight nights in the camper. We have all the comforts of home here. We plug into the 110 volt outlet in the garage - we have a garden hose to fill the water tank - we get the Internet over our telephones and also from wifi in Betty's home - we even have a drain to dump our sewer tanks. Our TV also works over the Internet so we are set.

Last night we had 2.4 inches of rain! That is major major rain here in Pennsylvania - it causes floods. We are high and dry though.

Yesterday - we woke up to a dead engine battery. The camper has two batteries - one for the engine and one for the camper stuff - they are not connected. I had installed a new battery in January so we went to Costco in Allentown and they swapped out the battery. It appears I had left the key in the ignition on the accessory setting and the battery drain dead-dead. They also said I had the wrong size engine battery - a group 58. The book says I need a group 65 - The group 58 has only 500 CCA - the group 65 has 850 CCA. They upgraded me and the new battery warranty extends me 36 months. All in all - I learned to not leave the key in the ignition overnight.

When we are sitting here - we have the camper plugged into 110 volt AC with a big extension cord. That charges the 2 big camper coach batteries and also allows us to run the 110 volt AC. It has been cool here overnight - so we do not run the AC then - but just keep windows open. Even during the storm - no rain came in the louver windows.

Our friend Ted is not home - but he wanted us to stay in his house and use his pool. We want to stay by Betty - so we declined the house and car - but did visit the pool. It is so nice - that Nancy will take her cousins there tomorrow. Ted remarried so he has two houses.

The camper has so many cabinets and we have stuff stored all over. The worst part is remembering where everything is. I plan to put little tags on each cabinet - with items listed. No use opening up every cabinet to find shampoo - etc. You would think I would learn them all after 6 nights - but then I move things.

We drove 400 miles today from Tallahassee to Manning SC. It was bright sunny except for the last hour which was heavy rain. At least it cooled it off a bit - to make camper sleeping a little cooler. We don't like running the air conditioner and generator at night.

Manning is a town of 4000 people - it was mainly the center of a lumber industry and other farming. We walked around downtown and enjoyed seeing the Confederate Memorial. Try reading the pictures of the inscription.

Tomorrow we will drive another 400 miles to Richmond and spend some time there with Drew and Family. It is Jack's birthday Saturday - he will be 12.

Next we will head to Tamaqua - it is only about 300 miles from Richmond to town. We are looking forward to some cooler evenings. 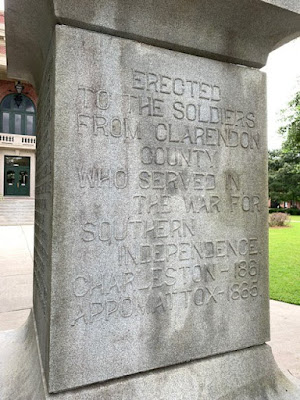 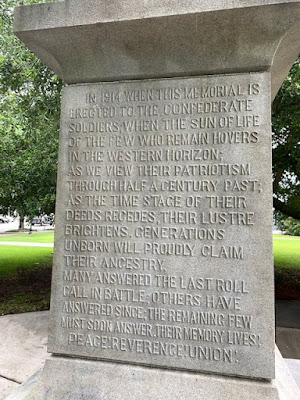 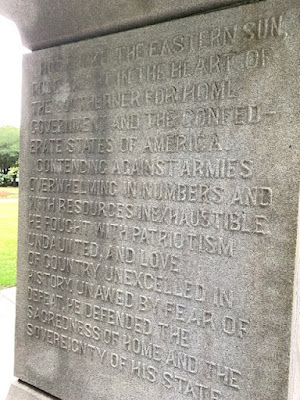 
We left Tallahassee at about 8 AM - this morning. The camper is all loaded for 2 weeks of vagabonding.

We are currently in Savannah about 300 miles up the road. We stopped here to stretch our legs. We will drive 100 more miles today and then find a place to camp.

Tomorrow we will visit Drew and Family in Richmond. then we will proceed to our old hometown.

No hotels - no restaurants - no public bathrooms. We have covid masks and will keep our distance. We take special care at gas stations with disinfectant. We now the plague is not over - it is still rising. We wanted to see the family. We had a covid test on Monday before we came.

I-95 is pretty busy here. We are looking forward to some cooler weather up north.

I understand the president is hoarding diapers.
Written by Harry Everhart on Thursday, June 18, 2020

June to December is hurricane season in Florida. During that time we are often without power. During Hurricane Michael two years ago - we were without power for 6 straight days. Thanks to my little Honda Generator - we had 2000 watts of power. That is not enough to run a whole house - but it will power your refrigerator - lights - television - microwave - fans - and many small appliances.

We were able to wash our clothes using the washing machine - but we had to hang the laundry out - because a dryer uses too much power.

My Honda 2000 tri-fuel generator is 5 years old now. We have gotten a lot of service out of it. I paid $1300 for it when I bought it new in 2015. Simply - I have a tap on my house for natural gas for our grill - I can plug the generator into that tap - and it runs continuously. There is not need to stop to refill the fuel. There are other benefits of running on natural gas. It is clean burning - no you cannot run it inside - but the exhaust does not have carbon monoxide in it. Natural gas also burns much cleaner than gasoline. You can also run it on propane from the bottle on a gas grill.

My neighbor had a Generac generator installed on his house and it cost $8000. It does not produce enough power to run his air conditioner - but it does turn on automatically during a power failure. His generator feeds right into his main power box on the house.

While shopping at Costco this week - I saw this tri-fuel generator. I do not endorse it - I have no idea how good it is. The name is Firman - and most products that Costco sells are pretty good. It produces 7000 watts and is $800! My Honda generator is very very quiet - I do not know how loud this one is. At 7000 watts that would power a whole home.

Again - I have not tested the Firman Generator. I just found it very interesting at that price - being able to get a trip-fuel generator for $800 - any generator - is a bargain - if it is any good. I figure that with one hurricane - these will sell out quickly. One problem with Costco - they buy products in lots. Once they sell out - you never see the product on their shelves again. It also has battery power starting - no ropes to pull.

As a backup - our camper has a 3000 watt generator - but it is not as quiet as our Honda - and it runs only on gasoline.

We love the service our Honda Tri-Fuel has given us. Five years of quiet continuous 2000 watts of 120 volt AC power. My Honda also has a 12 volt DC outlet that will charge car batteries too.

Check out this video of my Honda generator operating -


We had 4 days of really heavy rain thanks to a Tropical Storm that hit New Orleans. Usually storms do a lot of damage to Tallahassee trees because the soft ground gets soaked and wind pushes the trees over.  Although we had lots of rain - it was mostly straight down rain because of little wind. We can use the rain because we are well behind this year in rainfall amount.

Yesterday a giant oak fell and nearly hit the famous Knott House. What is surprising is the root ball was not ripped out of the ground. The tree was probably rotted and just broke off at ground level from the weight of the water. The ground is virtually undisturbed.

The Knott House is famous because after the Civil War it was the headquarters of the Union Army. On May 20th 1865 - the Emancipation Proclamation was read on the front porch steps. 80% of the people in  Leon Country were black slaves. With this law - they were declared free.

I parked my electric Leaf  near the trunk to show size.