I just got back from McDonald's getting some takeout sandwiches for lunch. Life is really bland when you must write about getting sandwiches on your scooter. Anyway - to my surprise - my 2017 Vespa Scooter just turned over to 1000 miles.

In 2018 - I saw this really nice scooter on Facebook for sale. It was one year old with only 500 miles on it. A new one would cost $6500 - but this one was only $3500. It was up in the boonies in Georgia. I drove up with the trailer to take a look. It was really nice - so I bought it and brought it home. I had to go to the seller's bank to get the title which was encumbered.

The Vespa Scooter is the only one with an all-steel monocoque body. The nicest features of this one are fuel-injection and ABS brakes. It is very smooth and can go 70 MPH - but I seldom go over 30 on it. It get 100 MPG. Since we have been overseas so much in the last two years - we do not put lots of miles on it. Lulu likes to take it to campus for parking - but right now campus is closed.

I hope you are enjoying the plague and now the protests.
Written by Harry Everhart on Sunday, May 31, 2020

This week I borrowed my friend George Dawson's slide scanner. He showed me how to scan old slides  - it was tedious - but it took about one minute per slide - doing 4 at a time. We first sat down with a slide projector to review all the slides before selecting 350 of the better ones. Now we have a computer file of 350 pictures - some looked pretty blurry.

Nancy does a pretty good job cleaning up pictures - and if her first piece of work is any indication - I think we are going to be happy.

The photo was taken in 1973. It was in Washington DC - in Congressman Gus Yatron's office - almost 50 years ago. We had driven our little 2 cylinder Honda car to the event. The temperature was in the teens. At the time I was a Republican Committeeman in Tamaqua - and Yatron was a Democrat. All three of us had gone to Kutztown State College to become teachers. Yatron was a teacher - then went on to be a school board member - and then to the House of Representatives.

We went to his office to pick up our tickets to be on the Capitol grounds. Gus invited us into his office - let us sit as long as we wanted - and served us hot chocolate. I am sure he did that for many people - he was all dressed up to be on stage - but he took this time to be with us. A couple years later - I followed his lead to the school board.

We enjoyed the ceremony - watched the parade - even sat on the limo Nixon rode in the parade - it was a different time. I swear to this day it was the same Lincoln that Kennedy wrote in Dallas 10 years before :-) I am looking forward to showing many more pictures - to prove not all the stories I have told are baloney. I hope Lulu can continue doctoring the photos - after all she is "that kind of doctor."

I Replaced Our Home Wireless Router - A Nest Mesh


During a thunder storm Tuesday - the lightning damaged our Apple Extreme Wireless Router. It is strange because none of the televisions - or modems - or anything else was broken. They just kept working. My son recommended the Nest Mesh System sold by Google. It is a series of wireless routers that you put around the home. He said they were on sale at Best Buy for $199. He said to order online and they would bring it to your car at the store - which is one mile away.

I picked it up - came home - plugged it in - downloaded the Google Home App to my iPhone. I put one unit on each end of our home. It worked immediately. I am getting signals of 238 MBPS all over the house. It is the fastest signal I have ever gotten.

Now - I am wondering if I can sell the old Apple AirPort Extreme Wireless Router in this condition. the yellow light flashes but I cannot connect to it. It tried rebooting it - with the paper clip - etc. Life during the plague.

ROCKET LAUNCH DAY - The big launch is today at 4:33 PM. It really flashes me back to the summer of 1969 - when I was a student at Kutztown - taking 15 credits about space science. I was working as a life guard 5 hours a day in Tamaqua - and driving to Kutztown for two classes a day in the morning. I was driving a brand new 1969 VW - cost $1649 - long low payments. I really needed a good car that summer - with work and school. At the end of the season - in August - I drove that VW to Woodstock with Bob LeMaster and Bob Rowan. Also in August at the end of the life guard season - I drove the VW to Miami Beach. My friend Richard Kantor went along to split the gas money. It was a 30 hour trip then - all along Route 1. We did stop at Cape Canaveral to tour the space station. I would have given anything to stay there to work for NASA - but I had a year of college left to do.

I met Lulu that summer at the swimming pool. We started a two year romance that ended up with eloping in 1971 - to Miami Beach. We got a hotel there on the beach for $8 a night - and just enjoyed touring around Miami and swimming in the surf. There was a big planetarium in Miami and I dreamed of just staying and doing planetarium shows - I was certified to do that. Kutztown had a program called Astronomical Instrumentation and I was in that program when Apollo landed on the moon.

The Saturn 5 Rocket was essentially a big dumb booster powered by liquid fuels. It was designed by Nazi Doctor Werner Von Braun. It has less computer power than a standard cellphone. But boy did those boosters thunder your guts when it left the earth. NASA tried to make it seem possible for normal human flight - but the laws of physics will always make is very dangerous. Today - we are doing essentially doing the same thing - using a tremendous amount of fuel to get objects into earth’s orbit. 50 years I was teaching how it would get easier and easier - but it has not.

Maybe it was because I was 21 - and so full of pee and new knowledge - bravado. Now 50 years later - it seems more risky and dangerous than it did back then. NASA was America’s blonde haired wunderkind. It could do no wrong. After burning up 3 astronauts on the launch pad in Apollo 1 and two full Space Shuttle crews - we know poo happens.

In 1970 - I had a student Peter. He loved science so much that he took there of my courses. He was very motivated. We lost touch after a few years. I had wondered what became of him. 50 years later we made contact on the internet. We exchanged life histories. He became an engineer and worked on building the International Space Station. He also bought and flew a helicopter - which included a very serious wreck. Today he lives near Huntsville Alabama - where spaceships are made. It is also where Werner von Braun used to live. Pete has all sorts of radio equipment and he is following the space launch intently.

It was fun teaching earth and space science all those years. I had lots of maps - pictures - movies - models - and trips. In the 1980s - we added computers. Kids loved that stuff. Growing up in coal country in Tamaqua - there were very few really good jobs. Being a teacher was one of them. When the rocket blasts off today - all that comes racing back.
Written by Harry Everhart on Wednesday, May 27, 2020

I really enjoy riding my Vespa Scooter. It is fast - quiet - smooth - dependable. It is just approaching its first 1000 miles. But I have always wanted an electric one. I had one way back in 1975 - but it was not practical - slow and short range.

The Doohan iTank seems like a nice combination for an old rider. It has the added stability of two front wheels that articulate like a Jeep for off-read riding. This also adds braking and stability - something older guys need. It has 3 big disk brakes that are controlled hydraulically - not by cables.

It can easily haul two adults. The batteries can be charged in the scooter or taken out and charged in the home. The price is listed at $3500. Supposed there ia a company connected with Tesla - renting them out in Vegas. 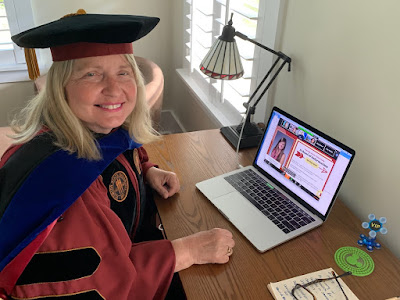 She is so busy with other projects - like China - Germany - and her new book - sometimes I forget that Lulu is a full professor at Florida State University. She teaches classes like everyone else. So yesterday she participated in the spring graduation program a bit. Using live Internet - students and faculty celebrated the spring graduation. The professors dressed up in their caps and gowns and saluted their students. It is not the same - but it was very nice.

Lulu will not be teaching in London this summer - but no one else will be at the FSU Study Centre there. She will be doing a little grant work from home - the rest of the time we will be waiting for the plague to lift. This has not stopped Lulu from planning some new exciting projects. She keeps going and going.

Since Lulu started at FSU in 2004 - most of her classes have been taught online and at the graduate level. I have had the pleasure of seeing Lulu teach FSU classes back home from - Germany - Australia - France - Hong Kong - Iceland - New Zealand - Scotland - England - Italy - and Greece. Sometimes we frantically were searching out a free Internet connection to squat on minutes before class started.

No one knows when the plague will lift. Until a vaccine is found - we will enjoy things from the safety of our home. We miss the kids. Lulu had a trip scheduled to London and Paris for May - but it was cancelled by the airline. She was going to take her sister Lori to see the kids and tour Europe for the first time. There will be plenty of time for that later.

Congratulations to graduates all over. I am sorry the plague has rained on your parade.
Written by Harry Everhart on Saturday, May 09, 2020

I did not have a haircut since January when we arrived home from China. The plague has had us under quarantine. One thing about being an old man - hair grows everywhere - even from my teeth. I could not stand it anymore - so we went on Amazon - and ordered a pair of thinning shears. They are scissors designed to cut only some of the hair - leaving some a little longer to blend in.

Back in 1971 - Lulu tried to cut my hair once - to terrible results. I ended up taking it down to a buzz cut with dents. But now that Lulu's eyes are better - and I am really desperate - I figure that the only difference between a good haircut and a bad haircut is a month.

The worse part was getting Lulu used to opening the shears before she moved back from my head. If you back out with the shears closed it hurts as it plucks the hair. She got good at that about half way through. I kept reminding her to only take 1/4 inch - but I could see 2 inch long hairs falling like white snow.

I honestly think she did a good job - and could probably get better if she wanted to. She seems to like what she did - and you know me when it comes to a bargain.