On Easter Monday we took the train to Quedlinburg with Joan. She wanted to get out into the German countryside - you certainly cannot judge Germany by just being in Berlin. So we got up at 6 AM - and caught an early train west out of the central station. Germany trains are quiet and smooth - they are also on time. I enjoy watching my iPhone to see if the trains pull out exactly on time - when the minute changes - the wheels move. We went through Potsdam and then a train switch in Magdeburg - in about 3 hours we were in the abandoned station at Quedlinburg.

Quedlinburg is one of the top 15 sites in Germany to see. The town is full of half-timbered houses - some people mistakenly call them Tudor buildings. Hall-timbered buildings are made of a railroad tie thick lumber frame - held together by wooden pegs. Then the spaces between the frames are bricked or stuccoed. They seem to last forever because most of the buildings in this town are from medieval times - circa 800 to 1500. Although this town was in old East Germany - government funds are being used restore it.

The most interesting place to me was the old cathedral castle up on the hill. It was built in the ninth century. It is a protestant church - but during the war the Nazi’s were attempting to make it into a shrine to the Nazi religion. It was Heinrich Himmler’s idea.

Heinrich Himmler was the head of the Nazi SS - his handpicked 10,000 police force with the job of caring for Hitler and the Third Reich. Heinrich I - or Henry the Fowler - is buried in the crypt of the castle cathedral. Himmler was trying to make him the patron saint of the Nazis. In 1936 - on the 1000th  anniversary of Heinrich I’s death - the Nazi’s decorated this town and had a full military procession through the streets and up to the cathedral - to the crypt. They had thrown the protestants out of the cathedral - and from 1936 to 1944 - this place was a Nazi shrine.

Quedlinburg is a beautiful little town - as my pictures will show. We enjoyed the shops - food - sights - people - and prices. Food in East Germany is inexpensive - both in stores and restaurants. I had way too many sugar cones of gelato at 1 euro each. We had very nice weather but at times it got windy. After supper we walked back to the station and waited for our 6:30 train. By 10 PM - we were home and tired. 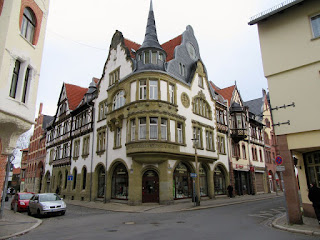 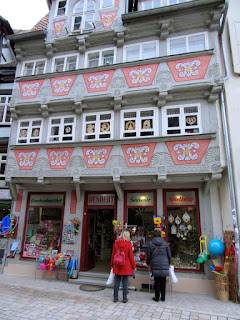 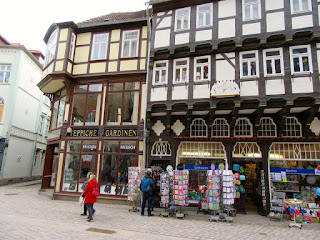 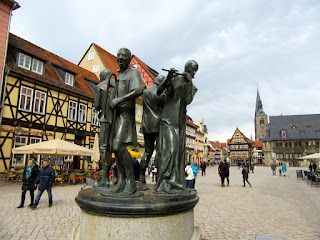 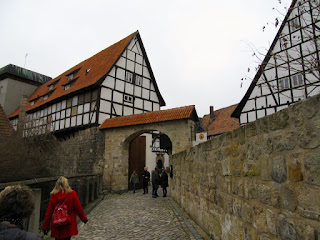 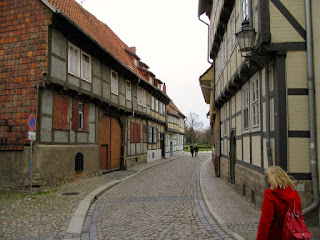 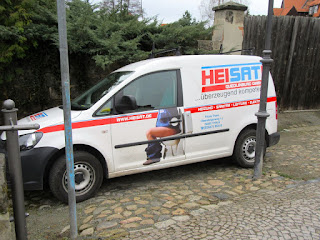 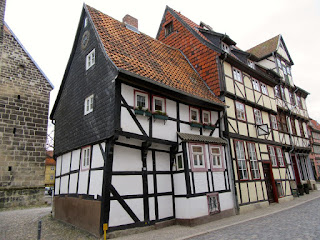 Cellphones in Germany. When we came over here - we had Apple unlock our iPhone 5S phones. We then bought German SIMM cards. Yesterday I paid for the coming April month service. I paid $20. That givse me phone calls - text messages - and 1.5 GB of internet use. It is good for 30 days or whenever you use up all the internet bandwidth. Last month I only used 1/2 GB so I had plenty left over - it does not roll over. You can buy service from a different carrier every month. Our carrier is O2. At home - we pay about $140 to ATT for unlimited service for two iPhones. Lulu and I each have our own plan over here. So our bill is $40 a month total versus $140 a month in America. When we go home - we are going to have a conversation with ATT.
Written by Harry Everhart on Wednesday, March 30, 2016

This Is America To Berliners 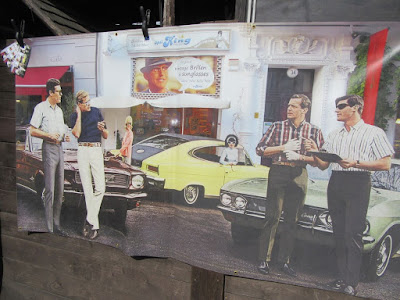 After World War II - America and Russia played good cop and bad cop over here. As a result - Germans are very nice to Americas. They loves our music - fashions - movies - and attitudes. they also think Donald Trump is an idiot.
Written by Harry Everhart on Sunday, March 27, 2016 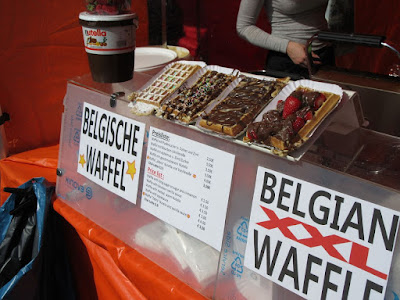 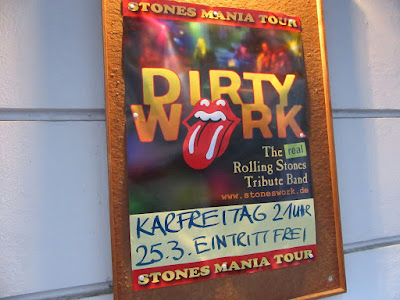 Last night the Rolling Stones played a free concert in Havana Cuba. But I am here in Berlin - and I am just old and senile enough to think I was with the Rolling Stones. We had just gotten back from a long rainy day touring Potsdam. Our wool coats smelled like German shepherds in the rain. We collapsed into a nice supper in our warm dry apartment in Prenzlauerberg - East Berlin. Were my hearing aids deceiving me - but it sounded like the Rolling Stones were playing down the street - not in Cuba.

The music was coming from a small blues club not 100 yards from our front door. Dirty Works - the real Rolling Stones Tribute Band was doing a free concert to whoever wanted to come and sit down and have a few beers and listen. The place was crowded - maybe 100 people into a space the size of our living room. The bar was serving beers for 2.50 euros for a pint. We begged onto a front table - and enjoyed 3 hours of fantastic music.

The band did not mind if I recorded them - so my hands got tired of recording after 10 songs. Check out the 10 videos after this article.

Make no mistake - these guys are serious musicians. They looked like they were in their 60s and 70s - their followers were just as old. I’d call them groupies but you do not imagine 60 year old men as groupies. Lulu noticed that everyone seemed to be drinking cheap beer - no mixed drinks - no food - no wine - no snacks. Just a wonderful trip down memory lane with good music. Between songs - the lead singer would chat with the crowd in German that sounded a lot like Pennsylvania Dutch. Then when the music started - it was back to English lyrics.

If you were brought up in Tamaqua PA in the 60s - you remember Lambert Ronny Gerber. He was a very talented young man - he could sing - play drums - play guitar - dance - he was just our connection to that period of rebellion. He also had the largest vinyl record collection I have ever seen. It was nothing for him to buy a dozen “albums” in a week - and try to learn all the songs. That was back when I could barely afford a long playing record a month - and they only cost about $3.00 each. Buying records usually entailed a trip to Allentown or Philadelphia. You could try to record them off the radio - if you did not mind static or people talking in the background.

While I was sitting there recording these guys on my camera - I thought back to the many days I would spend with Ronny Gerber and Greg Machay - recording their singing and playing on my giant reel to reel recorder. The singer last night looked exactly what I expected Ronny Gerber to look like in his 60s if he would have lived longer. The singer had on thick glasses and long but very thin hair. He had the love and enthusiasm for the Rolling Stones blues music - and he was a showman.

At about midnight - the band took one more break - we were bushed from our wet day in Potsdam - we put on our dog breath wool coats - now coated with the smoke of all the roll your own cigarettes - and stumbled home as the strains of Satisfaction lilted along behind us.


Time Is On My Side


Its All Over Now


I Need A Love


Get Off My Cloud

It was a light rain all day on Good Friday - but it did not stop us from exploring Potsdam. Although Potsdam is almost 30 miles away - we were able to use our regular Berlin transportation card to get there. When we got there - we purchased tickets for a hop on - hop off - tour bus. The main reason we picked it was because it was a double decker bus with the top deck covered - it kept us dry.

Potsdam was also where Russia and the KGB kept their agents. They had a colony in the city. Potsdam is also where President Truman met with the Allies and decided to to divide Germany into 4 sections after the war.

Frederick the Great had his palace here.

At the end of the day - we went to the train station and just were "stowaways" on a high speed train. We were back in downtown Berlin in no time at all.

Tonight at 9 PM - my bedtime - we are going to a club less than a block away. There is a Rolling Stone Tribute Band playing at a local Blues Club.

A Night At Cosmic Comedy - Berlin

Least night we spent at a comedy club in Berlin. About 12 comics spoke English. They were from New Zealand - Ireland - USA - Bahrain - England. It cost 6 euros admission. You got a free shot and free pizza. 3 hours of fun.

Lulu and Joan are in the front row.
Written by Harry Everhart on Friday, March 25, 2016

Joan Varner arrived in Berlin around noon on Tuesday. That would have been 6 AM back home in Tallahassee. So when we got back to the apartment - Joan went for a little nap -I would have expected her to be gone for the night - because she hardly slept on the plane over. But by supper time - to our surprise she was ready to go out for supper.

Wednesday morning when I woke up and walked out to our living room - there was Joan - ready to go.

I shot a few seconds of the Anne Frank movie.
There are more previews of the movie on youtube.

I Bought Birkenstock Sandals At A Company Store - Leipzig

Guess who has flat feet? A couple years ago - after sore feet from walking all over London - my foot doctor fitted me with shoe inserts. You know the ones with a little hump in the middle. Since then my feet have been great - but I have been limited to shoes that can hold my inserts. After a while my feet would even get sore from using Nike sandals. Next trip - the doctor said try Birkenstocks.

Birkenstock sandals are so bland - so simple - so plain - they are the exact opposite of fashion. It is the old argument - style versus function. The sandals are made in Germany of real leather and real cork. The secret of the sandal is that the cork bottom is shaped to the bottom of your feet. As you wear them - the cork changes shape to match your feet. Customers talk of them lasting for years.

I bought a pair in America - and they worked. I bought 3 other pairs on Craigslist. I was convinced that they were great. But one thing I did not like was that the sandals only had two cross straps - nothing to go behind the heel and hold the sandals in place. I hated that flip flop feeling. I swear it alters your gait. 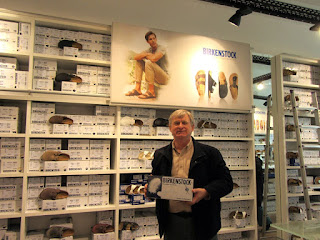