25 Years Ago - Our Visit To Doris Hollenbach And Hurricane Andrew


We are in Cocoa Beach - FL for a little vacation with the kids. Houston is being pounded by Hurricane Harvey. It is sweltering hot here and it seems like yesterday we visited Doris Hollenbach Meneses in her tropical home south of Miami.

We were at home in Pennsylvania enjoying the last few days at the pool before we started the 1992 school year. Lulu was teaching at Tamaqua and I was back at Panther Valley.

All of a sudden we got a strange phone call from Doris. We could barely hear her - her bag cell phone was going dead. She said Hurricane Andrew put them through a nightmare. They had no power - the well pump burned out so they had no water. They lived on the edge of the Everglades - and monkeys got out of the wild animal farm. They needed help.

The family spent the terrible storm - barricaded in the bathroom - under mattresses.

We had just purchased an old clunker Airstream camper. Doris and Lulu graduated from THS in 1972 together. We had to help. Her father Bob - brother Bob - and Brother Jay - started collecting stuff around town. Batteries - generators - well pumps - food - clothes - blankets were collected and loaded into our camper. Father Bob piled into the camper with us and away we went. Jay and Bob hopped into a pickup followed. We were all driving 1300 miles from Tamaqua PA to Homstead FL to help our fellow Coal Crackers.

On the way down - my camper broke down twice. Once in South Carolina - the water pump failed. Then in Miami - a wire came off the generator. But that night - a wrecker piloted by a man named Angel towed us right into Doris's yard. Angel was really an angel because for the last 40 miles we passed through bombed out Southern Florida. We rode in the cab with our Angel - and passed through miles of desolation. First - it was August in Southern Florida - and all the trees were bare. Andrew had sucked every leaf off every tree with his 150 miles an hour winds. Next all the power and phone lines were gone - again pulled off the poles like spaghetti. The only lights we saw were blue lights on police cars circling the stores and shopping malls. We breezed through toll booths at 50 MPH - not stopping to pay the fee as they waved us through.

Finally - we saw what was left of Doris's home. Elias and the kids were happy to see us. After we unloaded all the booty - the only thing the kids wanted were showers. Having those kids there reminded us of our two boys back home. That night - as the sun set over the beautiful flooded farm fields - Lulu said to Doris - that she did not know they had lake frontage. That water did not go down for days.

That night - after the kids had showers - they piled into our camper - and slept in clean fresh beds - with the air conditioner running off the camper generator. It would be a while before they could do that again.

Jay - Bob - and Elias got the well pump fixed. We struck up the generators that would power them for 4 months. Finally on Thanksgiving power was restored - when Doris bribed the power crew with a Thanksgiving feast.

We stayed a week. We helped cover the roof with blue FEMA tarps. We ripped out soaked carpet and tried to prevent mold. We woke up at 6 AM to the tune of two DC-3's carpet spraying the neighborhood for mosquitoes. Elias had the unpleasant task of shooting an invading monkey inside his home. It had escaped from the research farm down the road - supposedly they experimented with AIDS at the time - a terror worse than the hurricane.

It was the day before Labor Day - we had to head home for school in 2 days. We were feeling post-tramautic stress syndrome.  We woke up from nightmares (that lasted for several weeks)  and Lulu had a need to stop at every outlet mall on the way home to grasp on to civilization.

It was a terrible feeling leavng Doris and Company behind to subsist on that place - like a third world country. I tried to talk Doris out of staying - I suggest pulling up the family to Orlando or even Tamaqua. But they were determined to rebuild - and they did.

FEMA moved a house trailer onto their lot and they lived there while it took almost a year to rebuild their home. 25 years later they are still there. Doris still sobs when you bring up the topic. She writes for the local paper - and her stories tell the history of their community. But more than that they are therapy for Doris and how she deals with life. Doris is a survivor and one of our longest and best friends. She is now a grandmother several times over. There is nothing she likes better taking care of the grand babies.

Where do people get courage like that? How do you hang on when Nature deals you a bum hand. Doris picked herself up - dusted herself off - and just went on with her life.

As I type - Hurricane Harvey is pounding Houston. We wish the victims the strength of Doris to pull them through.

Disney Cruise Over - We Are Back in Cocoa Beach


The Disney Dream just docked at Port Canaveral - ending our family cruise. We will spend 3 nights in Michelle's condo in Cocoa Beach- before putting the kids on a jet in Orlando and then making that lonely drive home to Tallahassee.

It was a great cruise - enjoying the neat staterooms - fantastic meals and shows - and just watching the kids making family memories forever. Lulu just loves the beach and sharing her favorite things with the kids. A highlight was Kate getting made up for the Sunday Night Supper.

The ship spend a full day in Nassau - Bahamas - then went on to Disney's Castaway Key. On this private island is a full day of activities that includes a barbacue buffet and lots of time in the prettiest warm clear waters. Imagine ice cream machines on the beach full of vanilla - chocolate - strawberry - and banana swirl. You swirl your own cones.

We all got to ride the "AquaDuck" a giant water ride that circles the ship.
Written by Harry Everhart on Monday, August 28, 2017 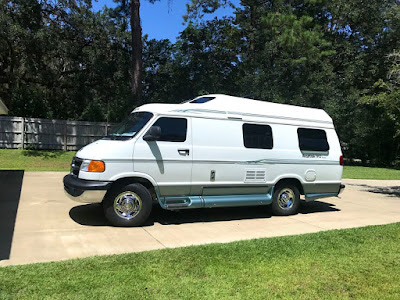 After a pressure wash and a hand wax - here is our camper.

Although it is only 19 feet long - it has a kitchen - bathroom - and king bed.

Roadtreks are made in Canada. Hymer from Germany recently bought them out.

Roadtreks are designed for winter camping.
Written by Harry Everhart on Wednesday, August 23, 2017

The guy could be a pain in the ass - but his early work was wonderful.
Written by Harry Everhart on Wednesday, August 23, 2017

Sunday we drove down to the North Dakota/Manitoba Border to visit the International Peace Garden. With the current political climate of Nazis - immigrants - and nuclear war - it is a sobering place to visit. Since 1930 - this garden has maintained a mile of the border that you can freely walk back and forth without showing your passport. The gardens are beautifully landscaped - there is a chapel - and a few smaller memorials. In the chapel are many quotes engraved in granite.

To get to the Peace Garden from Winnipeg - you take the Canadian National Highway 1 west - and then turn south on 10. You pass through miles and miles of peaceful prairies and farmland. We had lunch in a town called Minto - population 100. This restaurant  was just opened by a Canadian mother and her Egyptian son. We asked her why she chose Minto - such a tiny town - over Brandon (78000) - where she lived 30 miles away. She said the rent was lower. The food was great and we wished them well. I cannot imagine them making it to the first snowfall in September.

I am writing this from the Hampton Inn by the Winnipeg Airport. We have 3 flights home with upgraded seats for free. There is little chance of being bumped. We will pass right thru the path of the eclipse - alas a couple hours past.

Winnipeg - Minneapolis - Atlanta - Tallahassee - midnight home. One more trip for the summer - next week a Disney Cruise with the grandkids. Then 2 months at home.

If life is a marathon - and not a sprint - I am hoping I saved enough energy for the stretch.

Friday we drove north two hours to Lake Winnipeg and the Icelandic community of Gimli. In 1875 - a group of families from Iceland came here and settled a fishing and farming community. For years - no one else was allowed to settle here. It is beautiful lake front beaches and the largest port on the lake. We stayed at the Lakeview Hotel.

Saturday we drove west of Winnipeg to the Spirit Sands. This area is a provincial park to preserve a massive series of sand dunes deposited 18000 years ago when the continental glacier was melting. Normally - you can board a covered wagon and tour the formations. We arrived at 4 PM - the last wagon was 2 PM. We walked one mile into the area - but it was tough walking on the sand.

To relax after that walk - we had supper and a little gambling at the Sand Hills Casino. Both the dunes and the casino are on First Nation land. We had a nice supper and thanks to Lulu's luck - we left the place $33 ahead.

We ended up sleeping on Saturday night sleeping at the Comfort Inn in Brandon - along the beautiful Canadian National Highway 1. This highway crosses Canada - east to west - 4000 miles.

Sunday - today - we will drive south to the International Peace Garden on the USA/Canada border. Monday - we fly home from Winnipeg. 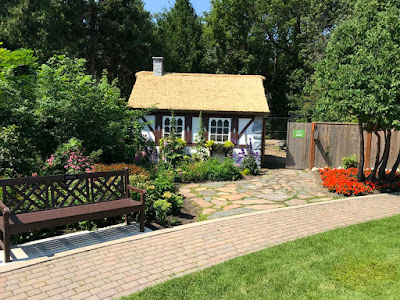 From 10 AM to 5 PM - we were hosted by Gerald Brown. He took us on a VIP tour of his lovely hometown - Winnipeg.  We went to parks - churches - neighborhoods - and libraries. Winnipeggers are very proud of their town.