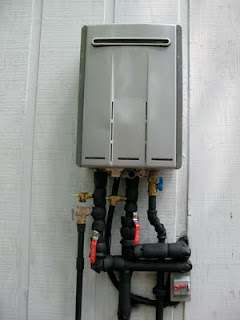 Almost two years ago I had Seminole Plumbing install a Rennai tankless water heater on our current home. At the time an installation cost about $1400. Since then we have enjoyed an endless supply of instant hot water. It produces the hot water instantly - no holding tank to waste energy. We were so happy we got a $675 rebate from the city - and our energy bills dropped about $40 a month.

Just this afternoon the city decided to double that rebate to $1350. I immediately called Randy at Seminole Plumbing and ordered one for the brick house at 1816 Seminole.

If you do not have city gas - the city agrees to install a new meter and gas line to your house free of charge.

Apple is by far the largest seller of online music in the United States, with 69 percent of the market, according to data from the NPD Group, a marketing consultancy. Amazon’s MP3 store was in second place, with an 8 percent share. Apple is also the largest seller of music, with 26.7 percent of the overall market, up from 12 percent in 2007.  - NY Times
Written by Harry Everhart on Wednesday, May 26, 2010 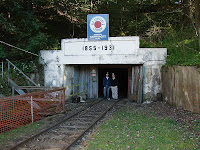 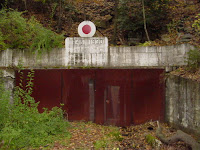 Here is a story from the Standard Speaker. It is about LCN (Lehigh Coal and Navigation) - the coal company that has worked the hills around Tamaqua and Panther Valley for 200 years. Every day for 33 years - I navigation the road to school zigzagging my way past the old mines on my way to work - the same road my Dad navigated for 25 years before me. I would go by Greenwood (No.14) - then up Number 11 Hill - circle by Number 8 in Coaldale where Dad worked 25 years - finally past Number 9 in Lansford where the locals have turned the mine into a museum. Every day from my third floor science lab windows I surveyed the mine mess left by the endeavor.

The "Navigation" in the name comes from the days when they took the coal to Philadelphia by canal boat.

Our area produced Anthracite - the clean burning metamorphic rock that powered the industrial revolution for 100 years. There are still millions of tons left there in Schuylkill and Carbon counties - but the market has dwindled. Today - it is too dangerous and expensive to make a go of it.

The Final Piece of the Puzzle For the Brickhouse 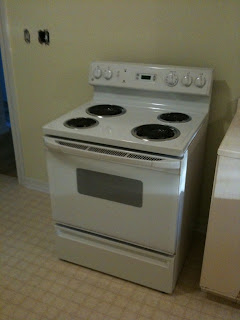 We just got back from picking up this stove. We found it on Craigslist. It is like now - the seller was remodeling her kitchen in stainless steel.

The brick house is now just a few days from move-in condition - if you don't count the new windows being installed June 1st.

For a more detailed video of the jump - click on the title above.


Our neighbor Joel Dawson did something that less than .0001% of the world population has done. She jumped out of an airplane using a parachute and landed safely on the ground.

It was a festive affair as family and friends gathered to help celebrate Joel's 70th year. The weather was fantastic at this little country airport  about 15 miles north of Tallahassee in Quincy. 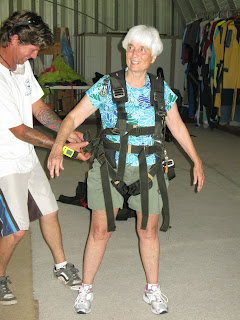 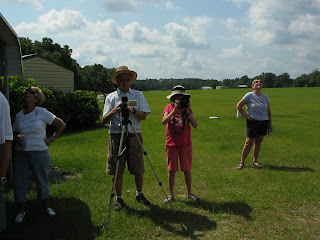 Husband George will see the flight at home
For a more polished video of the jump go here -
http://gallery.me.com/dawsongj#100480 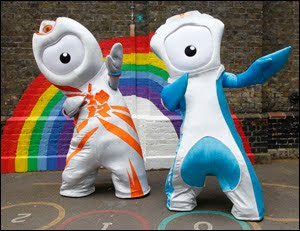 Wenlock and Mandeville are the Olympic mascots for the London 2012 games. They might scare small children.
What's with the rainbow - are they from Hawaii?
Written by Harry Everhart on Friday, May 21, 2010

The Birdhouse: A Story About Ray Primm - the Man Who Lived 40 Years in the House We Just Bought 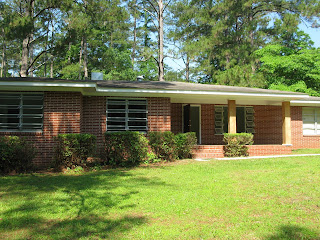 Harry's Note - You all know that Lulu and I bought a property down the street with the intention of building a new home on it. The lot is big - 250 x 210 - right here in downtown Tallahassee - less than a mile from the Capitol. There is a brick house on the property - but the city said there is room for 7 more. We only intend to build one - but keep Ray's for a spare.

Mike Brown is president of the local amateur radio club. He wrote this column about Ray Prim - the man who lived alone 40 years in the house at 1816 Seminole Drive that we just bought.

The young man sat quietly at the desk in his dorm room. While he loved FSU, the school was a long way from home, and in an effort to make some friends in the area; he’d brought his 2-meter HT with him.
It was late on a Sunday evening and he’d participated in the local ARES net a short time before, but feeling a little bit blue and homesick, he put his call out on the air…
In a few moments, he received an answer…”How ya doin’ young man?…KAAY DEEE 4 VQS…
“Hi Uncle Ray…I’m fine” and the conversation moved on from there for about 10 minutes. I had passed my Tech test at that point, and had a radio in the car, but in those days, the gratification of a call sign was a wait of several months, rather than a few weeks, so I was held to being strictly a listener.

Lulu and I bought a 250 x 210 lot just 5 doors down the street. It has an old brick ranch home on it. We are renovating the old brick home - but are main goal is to build a new home on the lot. I have been cleaning it up a bit in the last few weeks.
So far - new paint inside and out - new windows coming - new lights - new outlets and switches. Shampooing carpets.
The house is strong - brick walls are 6 inches thick. It is on a concrete slab that is raised form the ground with a crawl space for heat/ac - plumbing. It has a big carport and two brick out buildings. there is a long driveway and parking lot on the north side of the building.
Address is 1816 Seminole Drive. 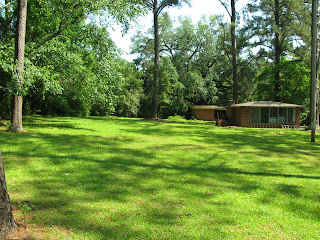 This is looking north in the back of the lot. That area is 120 feet x 210 feet. If we put the house where the middle tree is - it  would face south and be completely hidden from the street. 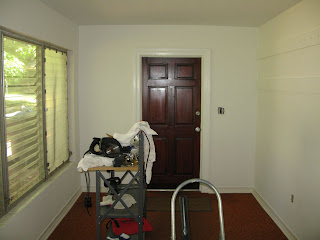 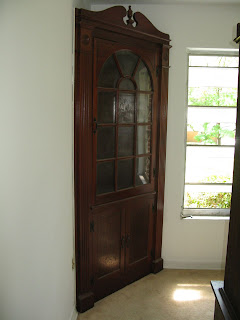 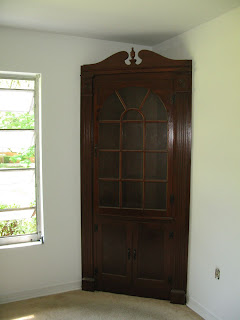 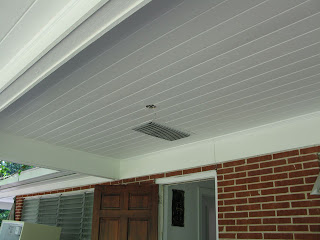 Bead board back porch ceiling - vent is from attic with full house fan. 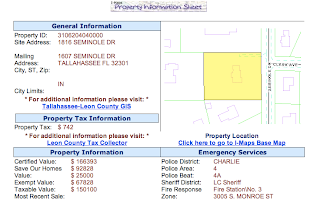 Back in Pennsylvania - when I was on the School Board - I used to argue that property tax assessment should not change until a property is sold. Then the new basis for the taxes would be the selling price of the home. That is good for an owner who has been in a home a long time. Their property taxes would not go up until the house sold and in many cases that only happened when they died.

Be careful what you wish for - because Florida passed a law saying property taxes cannot rise more than 3% in any one year unless the property is sold. At that time the city or county can reassess the property.

Since our present home is one of the more recently sold properties - we pay more taxes than most of our neighbors. Our home taxes are $3300 a year. Some of my neighbors pay around $2000. And the taxes on the home we bought 5 doors down the street are only $740 - because Ray - the former owner - lived there 40 years. 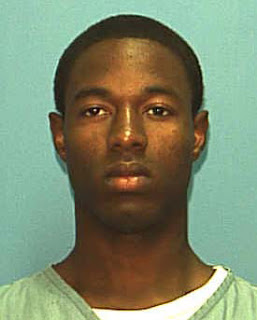 Tuesday  there was a shooting less than a mile from our house. Looks like one of my long lost cousins is at it again. Supposedly - there is Indian blood in our family tree.

May 13, 2010
On Tuesday, May 11, 2010, the Tallahassee Police Department responded to a reported shooting in the 2400 block of Country Club Drive. Upon arrival officers located two male victims who had been shot. Both victims were transported to Tallahassee Memorial Hospital with injuries that were not life threatening. 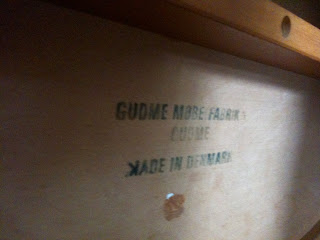 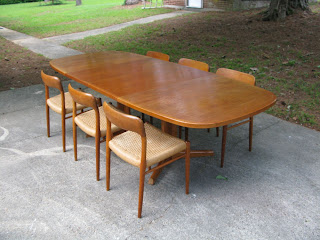 Lulu loves to hunt for bargains. Since we bought the extra property - she has been on a whirlwind shopping expedition. Today she landed a big one.

It is the time of the year when the students are going home for the summer. They are eager to sell their furniture and get on the road. Most of the furniture is junk - but every now and then you find a gem. 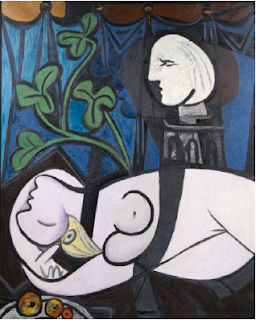 "Nude Green Leaves and Bust" by Pablo Picasso recently sold for $106 million. I don't get it.
Written by Harry Everhart on Friday, May 07, 2010 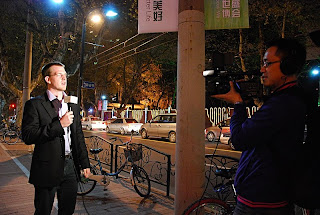 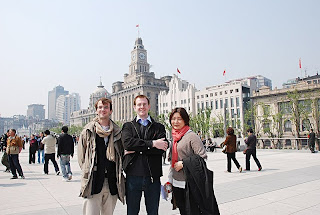 Brandon Taylor has been in China almost a year and he shows no signs of returning to the USA for work. He is a very popular man over there - lives in Beijing - working for an English speaking newspaper. He stands out in this town with his light skin and tall stature.

His company sent him to Shanghai (finally a name I can pronounce and spell) - it looks like he really enjoyed it there. 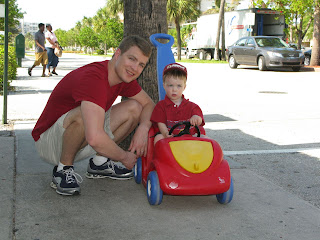 Picture - Drew and Robin used to prowl these streets when they lived in South Florida. Nancy and Harry spent their honeymoon here. Now it is Jack's chance to navigate A1A.

Yesterday at 5 PM we pulled into our driveway in Tallahassee. We had left Drew and Jack off at the Fort Lauderdale Airport and drove straight home - if you do not count an hour of shopping at the outlets in Orlando. So it was roughly 8 hours of driving. Lulu had a cooler of food and drinks packed - we shared driving chores - and our Honda Odyssey purred for the 500 mile "odyssey."

"On The Beach" - The Oil is Coming to Our Beach 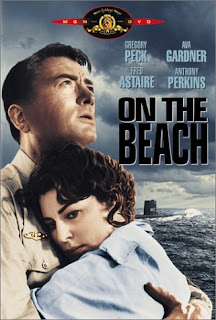 One of my favorite movies was made in 1959. It is "On The Beach" starring Gregory Peck.

The plot is simple - in the movie World War III occurred in 1964. It was a nuclear holocaust and the radiation fallout was spreading across the planet killing everyone. Australia was the last place where people were alive. It had a very deep feeling of gloom and doom. Everyone longed for the good old days before the people of the world were on a path to wipe themselves out.

This weekend a giant oil spill is working its way toward the best beaches in the world - the Florida Panhandlel. If you have never been there - the sand reminds you of powdered sugar - it is that white and fluffy. The other day - while Florida's legislature was trying to pass a law allowing oil drilling along the coast - a giant oil rig caught on fire and free oil was pouring into the ocean at the rate of 5000 barrels a day.  The super sad part of it is that the oil line break is 3 miles under water - and no one knows how to stop it. The oil rig is owned by British Petroleum - and like Pilot - they are washing their hands - obviously nowhere near their rig.

A Few Days With Drew and Jack

The next four days we will be at a condo on the beach at Fort Lauderdale. While Drew is at a convention - Lulu and I will spoil/watch Jack. Jack will be two in June. It was 30 years ago - when Drew was like Jack - we spent a year in Orlando while Lulu earned her master's at UCF. Then it was my job to stay at home with Drew and Keith - ages 3 and 2. Now Drew is doing the same with Jack - only better. 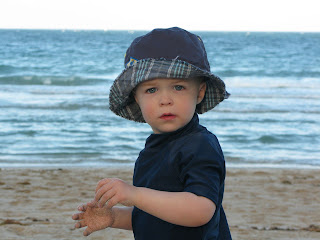 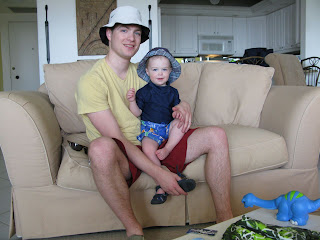 On Road to Fort Lauderdale

Hot and sunny. One hour to go to our condo in Fort Lauderdale. Lulu is
piloting the Honda van. Ever since our honeymoon in 1971 we have
driven this stretch maybe 60 times.

Jack and Drew are still in Rhode Island. We will get them at the
airport at 3:30.

Drew has a convention and we will have Jack for 5 days. Lulu got a
condo right on the beach - we have all the beach stuff packed.

The Turnpike Is really clear this Sunday morning.

Last night we had supper at the Palma Maria near Orlando. All four
Rosinolas served us. Their food is still tops. I love their peanut
butter pie and banana cream pie.

Next stop - walmart - to stock up on groceries for Jack and Drew - me
too.

Sent from my iPhone