Installed An Inverter In Our Camper 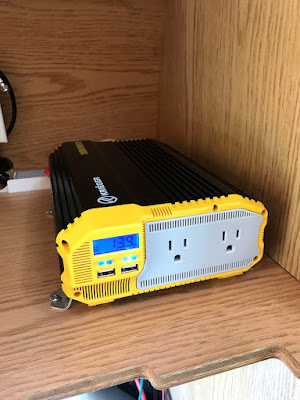 
When camping it is nice to have both 12 volt DC power and 120 volt AC power. The lights in our camper are all LED bulbs that run on 12 volt DC current from the coach batteries which sit in a cabinet under the king bed. If you want to run 120 volt AC appliances - normally you would just turn on the generator and you have 2800 watts of power. But many times you want to use 120-volt power but you want it quiet.

I just installed an inverter in our Dodge Roadtrek. Now we can operate all sorts of small appliances - television - vacuum cleaner - phone chargers - etc. I chose the inverter on Amazon because it offered a 3-year full replacement warranty. It also only cost $60. It produces 1100 watts continuous - 2200 watts peak. It is not enough power to run the air conditioner - but would run a large fan if you wanted.

A nice feature of this inverter is the digital readout on the front. It tells you what the battery voltage level is. It also tells you how many watts are being used. On the front of the inverter - there are two standard 110-volt outlets. There are also two USB outlets to charge cellphones. There is an on/off switch on the front and an optional remote switch.

The hardest part of installing the inverter was running the cables safely from the coach battery to the inverter. Because of high amperage -  I had to use 4-gauge cables. I installed the included 150 amp fuse in the line.

I use the inverter mainly to power our 24-inch flat screen TV. The TV uses only 35 watts of power - and the inverter produces 1100 watts continuously. The cellphone use very little too. A hair dryer uses over 700 watts. Since the air conditioner draws over 1100 watts - I can only power it with the main generator running.

It is a simple installation - just two thick cables to the battery - and a ground. It is not tied to the camper's regular electrical system or battery charger. It is completely independent. The cables are routed under the king bed - then behind the wall paneling. They enter the TV cabinet through a hole in the bottom that was drilled at the factory. You have to remove a few screws to gain access.