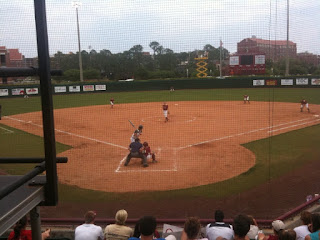 We lost 5-2  :-(
Weather was great - we stayed the whole game. This was our last home game.
At least admission was free.

The boys beat Miami with a walk-off homer on the field next door.
Written by Harry Everhart on Sunday, April 25, 2010

Earth Day - We Bought Some Earth


Video - Front and Back of the Ray Prim House

Ever since we bought our home on Seminole Drive six years ago - we dreamed of building a new home in this neighborhood. There were no lots available because the neighborhood is 60 years old and all built out. We could have bought a new home in Southwood - but then we would have been 5 miles farther from campus - we didn't want that.

April 22, 1970 - I was a senior at Kutztown State Teachers College - and student teaching at Dieruff High School in Allentown. This was the official Earth Day number 1. After 33 years of teaching Earth and Space Science at PV and 7 years of retirement in Florida - big things are coming on today's Earth Day.
Written by Harry Everhart on Thursday, April 22, 2010

The announcement came just days before the 40th anniversary of Earth Day on Thursday. And although the move is expected to save paper, it is also expected to save the government more than $300 million over the first five years and $125 million each following year. It costs about $1 to cut and mail a check but only 10 cents for a direct deposit. Each year, the Treasury issues more than $135 million benefit payments via paper checks.
Written by Harry Everhart on Wednesday, April 21, 2010

8 Days on the Road - Safely Home Before Midnight

We had two good flights - actually got here a bit early. We did not get offered a bump. We did not lose our bags.

In the mail when we got here was the keypad dock for our ipad.

We had a great time - but it is good to be home. It was fun seeing everyone from back home - but 8 days - 4 hotels - 4 cities if you include Tamaqua - and living out of one suitcase.

Sent from my iPad 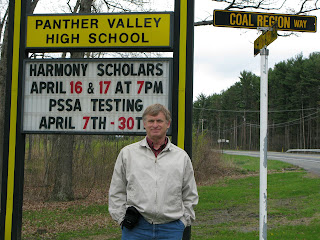 On Sunday - we told Sherman to set the "way back" machine to 1971 - 2003. Lulu and I had the pleasure of visiting people - places - and times from our early years together as teachers - home builders - and family folks.
Some people will say that Tamaqua and the Panther Valley are in a time warp - things do not seem to change. If you are from the Valley you know that is good because you can improve perfection.
Read more »
Written by Harry Everhart on Monday, April 19, 2010 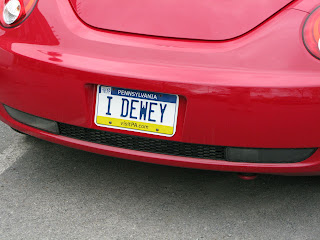 There is No Place like Home - Back in the Coal Regions 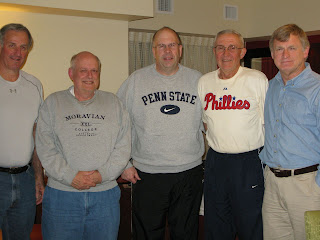 We pulled into our Residence Inn near Tamaqua to spend the next two nights. I got on the phone to 4 of my teacher friends to have a "come as your are" party. By 7:30 - the 5 of us were swapping stories and ailments.

Mike Cerimele - Charlie Depuy - Ted Collins - Joe Ligenza - and me. We all worked in the Panther Valley Middle School together. Mike taught reading - Charlie math - Ted Computers - Joe a variety - and Harry science. Charlie and Ted are still in action.

Our hotel in Chicago was on the northern edge of Millenium Park. We were also about  1/4 mile from the Lake Michigan shoreline.

In the park - they rented bikes for $10 an hour. the weather was prefect - approaching 80 - but maybe a bit too windy. We got bikes and rode up the coast. The wind was causing some small waves - there were some people sun bathing - but no one in the frigid water.

In the top picture you can see our hotel. It is the tall brown building with the green pointed roof. The second picture is Lulu on her rental bike. 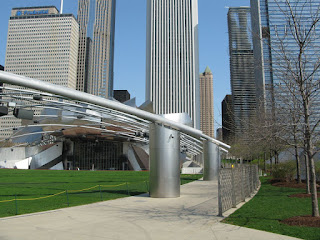 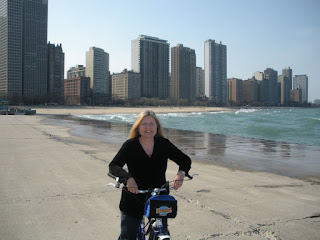 These pictures were taken Monday.

"Dick" as in Dick Armey is a Dirty Word

I wrote a story about the tea party this morning and submitted it to the Tallahassee Democrat. It kept being bounced back with this message -

"removed the words listed below and resubmit" - Dick

I did not have any editor named Dick so I kept trying to send it in because no words were highlighted in the article. Finally - I wrote to my editor Mark and he said -

The Democrat's computer is flagging the word "Dick" as in Dick Armey!  You are not allowed to use "Dick" anymore in the newspaper or on the web page.

So I changed "Dick"  to "D ick" and it went through. Talk about being politically correct!

Cherry Blossoms were Gone But Had a Perfect Day in Washington 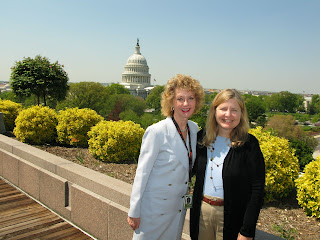 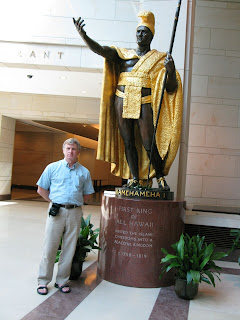 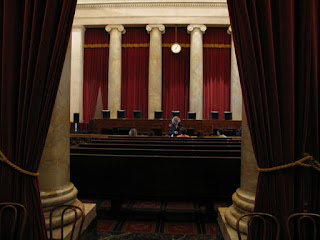 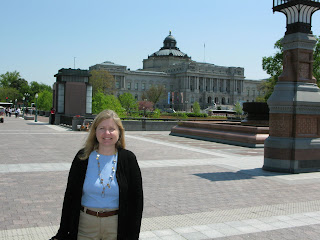 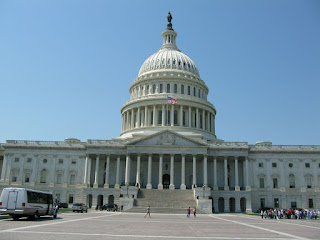 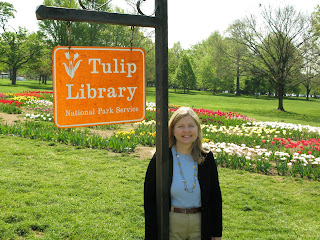 Not a cloud in the high blue sky and 75 degrees hosted a perfect day in Washington.
Lulu has to make a presentation to a subcommittee Friday - so we had a day of leisure to spend in our nation's capital. We started our experience with an all-day pass for the Metro. Our hotel in Ballston VA was on the orange line - so in minutes we were at the Smithsonian Metro Stop.
Lulu wanted to see the cherry blossoms along the tidal basin so we walked there to find the blossoms on the ground - we were too late. But we did stumble on the delightful "Tulip Library." Lulu collects pictures visiting every library she can - and this was no exception.
Read more »
Written by Harry Everhart on Friday, April 16, 2010 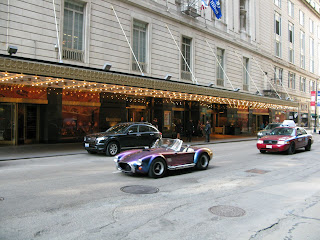 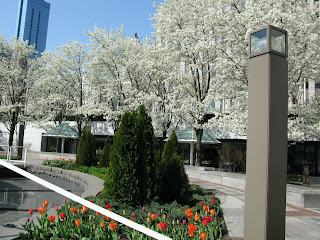 We just had the pleasure of spending 3 days in Chicago. It is a neat city - too bad it can be so cloud - windy - and snowy. Today as we left it was 80 degrees - not bad for a springtime along the lake.

1. (1962) My first trip to Chicago was as a 14 year old Boy Scout. Dad did not have a lot of money but he wanted me to go to Philmont NM - the Boy Scout camp in the desert Southwest. He arranged for me to go with a group from Scranton. We rode on the famous Phoebe Snow train of the Erie and Lackawanna Railroad. On that 1962 trip we spent a day touring Chicago on a Gray Line bus.

2. (1990) Lulu's doctoral dissertation was selected best in the country by the ALISE. She received a $1000 check and an all-expense-paid trip to Chicago - staying at The Palmer House and presenting at the convention.

I am on the road again for the next 9 days with Lulu as she does the stuff that presidents of the AASL do. The ALA has their main offices in Chicago so that is where the tour starts - then we go to Washington DC - then drive to State College and Tamaqua PA - finally flying back to Tallahassee from sunny ABE Airport in Allentown. Maybe I am a little cranky having to leave Tallahassee during the two most beautiful weeks of the year or maybe it is because I had to leave our new property just a few days from closing - so my review of the Billy Elliot opening here may be viewed through coke bottle glasses. It was really nice for Lulu to score two tickets to my favorite play just a block from our hotel.
Read more »
Written by Harry Everhart on Monday, April 12, 2010

We had a nice flight from Florida. We got to our Fairmont Hotel - got dressed and went to the theatre. They had the red carpet out - we asked why - opening night! Solidarity forever! We're proud to be working class.

Chicago is my kind of town - if it didn't snow here.

Sent from my iPhone 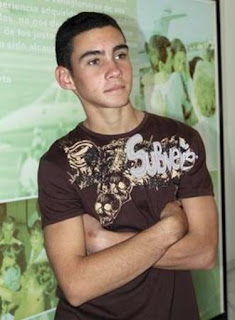 It has been 10 years since Elian was returned to Cuba to live with his father. Where has the time gone? He is 16 now. 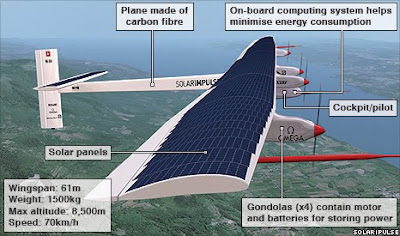 PAYERNE, Switzerland (AP) -- Swiss adventurer Bertrand Piccard's team took its round-the-world solar plane prototype into the skies for the first time Wednesday, with four propellers lifting the massive craft off the ground at near bicycle speed.
Piccard said the two-hour test flight will examine if the plane, with the wingspan of a Boeing 747 and the weight of a small car, can keep a straight trajectory. The team plans to fly it around the world next year.
Read more »
Written by Harry Everhart on Wednesday, April 07, 2010

Tonight we will all be watching the championship game. Duke will be Duke - Butler will be the smallest school in the game in 40 years.

Duke is a heavy gambling favorite but I am guessing that 95% of the fans in the arena and watching on TV will be hoping for the upset.

In the movie "Hoosiers" a small school in Indiana beat the city power to win the state championship. The school in the movie is called Hickory High School - in real life the school was from the small town of Milan. The hero in that game was Bobby Plump.

Bobby Plump went on to play for the Butler Bulldogs in the Butler Arena which just a few miles from tonight's game. A famous line in the movie was, "Let's win this one for all the small schools that never had a chance to be here."

Drew Got His iPad First! 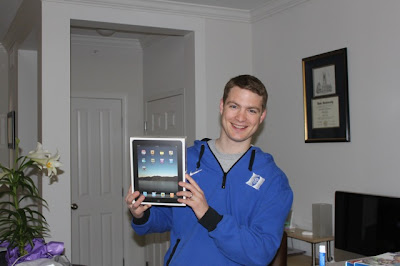 Drew was at the Apple store early this morning waiting in line. He had pre-ordered two Apple iPads - I guess one for each hand.

Then - he sold one of his reservations for $50 to another guy.

Now he is home - his eyes are glazed over - like a kitten with too much catnip.


Today is Dad's birthday. He would be 94 if he were still alive. Alas - he died 28 years too early to experience March "iPad" Madness.

Tomorrow - April 3rd - a day that will live in infamy. Apple will deliver millions of ipads to stores and customers all over America. Everything has been choreographed for customers to receive their new miracle tool through UPS at precisely the same time.

iPad is supposed to be a revolutionary new computer product to "change" the world forever. For $500 (plus tax and shipping) - millions of Apple groupies will be receiving this 8 x 10 x 1/2 inch sheet of glass that is supposed to change the world.

Simply put - it is a handheld computer that allows you to type directly on the color screen to send messages - listen to music - view photos - play games - watch videos - read email - and surf the net.  It looks just like Apple's iPhone - only bigger - but you currently can't use it as a telephone. Some folks call it a "tweener" - it will fill the void between a cell phone and a laptop computer.

Techie critics are already panning it as a useless piece of garbage. Comedians are having a field day over the silly "iPad" name. Others are claiming it will be the replacement of a hallowed icon - the book - and savior of the obsolete news standard - the newspaper. 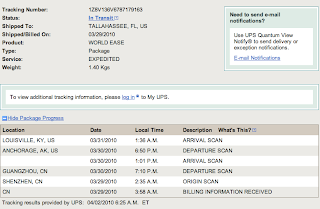 I have taken the bait. For the last few days - I have been checking the UPS site hoping the "brown pen guy" will be drawing circles around my home predicting an early delivery.