EDITORS NOTE - Alan Hanstein reminded me - the Hyundai is eligible for a $7500 federal tax credit. Tesla do not get this tax credit anymore because they sold over the limit. That tax credit would make the Hyundai less expensive for the buyer. Harry.
Today I got an email from Werner Hyundai. I had told them at one time I was interested in their electric car. They had gotten a few in and asked if I would like to drive one. I emailed back saying - sure. We made an appointment for 1 PM. When I got there - I could not see any different looking cars in the lot. I went into the showroom - and one was on display. It is a very nice looking car - but more like a small SUV than a sports car. The salesperson - Daniela Reina - said they had two more in the back - and she would get one prepared for a demonstration ride.
The three cars they had were light gray - dark gray - and white. Two of them were in mid-trim level - the white one was limited trim - which meant a sun roof and more gadgets. I drove the light gray one. I will compare this car to my Tesla Model 3 Long Range - although the Hyundai felt bigger and taller more like the Tesla Model Y. The Ioniq was taller and easier to get into and out of. There was no stepping down - you easily slid in. Those were two features I like over my Tesla Model 3. It also had a softer ride than my Tesla - which has a tighter sports car suspension - like a BMW. Those are features old folks like. The seats are very comfortable and luxurious. It is a hatchback so you could put the back seats down and sleep there for short periods - not overnight.
The specifications you use for comparison are range and power - and of course - price. The Hyundai would be $60,000 out the door with tax and tag. The Hyundai has 225 horsepower and rear wheel drive. Its range is 303 miles.
Comparing apples to apples - My Tesla Model 3 LR - cost $56,000 out the door. My car has 450 horsepower! My Tesla range is 353 miles. My Tesla has two motors and all wheel drive.
The interiors are very different. Inside the Hyundai - it is more like a convention car with two separate screens - and controls and buttons all over the place. The Tesla is more spartan - almost all the controls are on one big screen in the middle. The Tesla dash is pretty bare. I did not go over all the different tech things. Both have auto pilot. I am used to the Tesla big screen - so now I like that. I could get used to the Hyundai way. Both cars are very quiet inside.
One of the main reason I bought a Tesla is they have their own supercharger network. Those chargers are exclusive to Tesla and they are all over the place. We use them on long trips. Both cars cost about 3 cents a mile of electricity when charged at home. The first 1000 miles on a Tesla Supercharger are free. After that you are billed on your Tesla bill - over the Internet. Hyundai gives you 2 years of free charging - I do not know what chargers you can use - not the Tesla chargers. In the future - there will be more and more places to charge. but the Tesla chargers are a big plus.
Both cars can be charged at home with a 110 volt AC plug or a 220 volt AC dryer type plug. The cheapest place to charge is at home - about 10 cents a KWH.
One major difference - if you want a Tesla like mine - it is a 7 month wait now. You can buy the Hyundai right off the showroom floor. 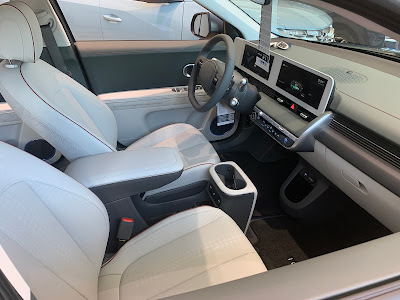 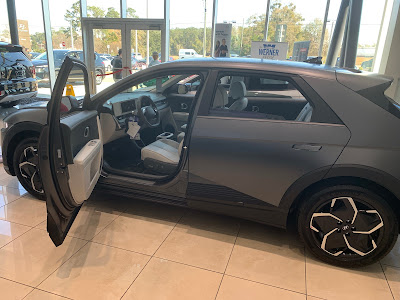 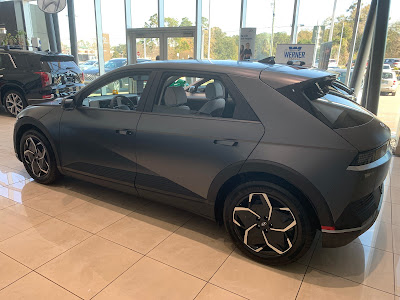 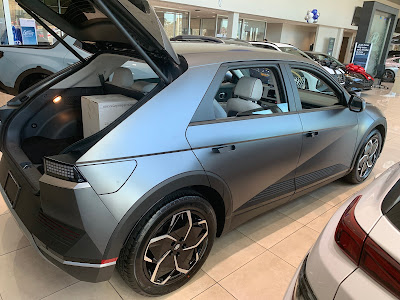 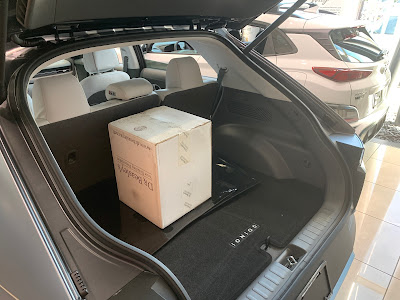 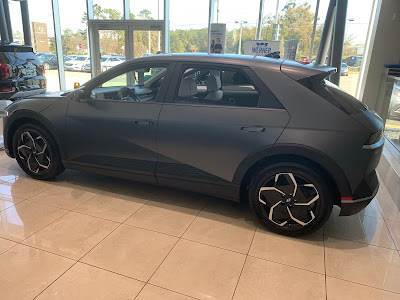 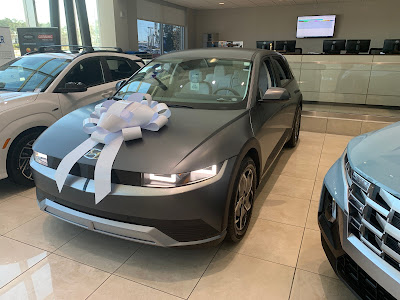 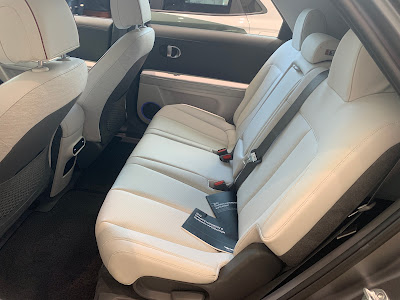 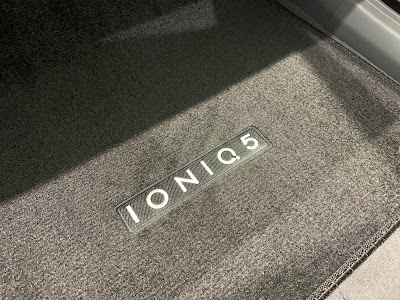 On Friday - Lulu and I decided to take the Tesla for a long trip. We heard Jay Leno was doing a stage act in Sarasota - we decided to get a hotel in Tampa - maybe see the Philadelphia Eagles in a playoff game.

Saturday morning I woke up with a sore throat. I did not have a fever - but I feared covid. Some say we are all going get covid - even those with 3 vaccines - I figured it was my turn. We went over to FAMU campus and got covid tests. If we had it - we stay home - if we didn't we would drive.

At 10 AM we got our test results - negative. We went right on the road. We decided to take the back country road way to Tampa. Our Tesla had a full battery - 350 miles worth. We knew there was a Tesla Supercharger in Crystal River. So we enjoyed a quiet 150 mile trip through Florida nature country. At Crystal River we stumbled onto the Manatee Festival. This little coastal town is famous for the lumbering mammals. As our car charged at the WaWa Market we had lunch. Then we walked among the vendors in this cute little coastal community.

At 3 PM - we pulled into our Hilton Homewood Suite near the Tampa Airport and Raymond James Stadium. We took a little rest - and watched FSU beat Syracuse on TV - in the Carrier Dome.

At 6 PM - we drove to Sarasota where Jay Leno was playing the Van Wezel Theater. We wanted to find a place for supper but the theater was in a nice neighborhood with few if any places to eat. We went into the theater - after they checked our covid cards. Lulu was hungry. She went downstairs to see a dining area with a lot of old people having supper. We walked up to the waiter and asked what the deal was. He said it was a dinner and show deal. It had a really nice spread including prime rib. He gave Lulu a wink and said - you look hungry. We had a nice supper - and no one asked for payment. We went upstairs and sat in our seats just in time for the show - 8 PM. Maybe our tickets included dinner :-)

Jay Leno is a favorite of mine. I liked watching him on TV at night - but I like even better his talks about automobiles. Jay has a car collection worth over $50 million. He knows everything about the cars. Go to YouTube and look him up. He is very entertaining. Jay did 90 minutes of stand up comedy. He kept going and I never saw him use notes. He never sat down.

After that we drove back to the hotel for a nice sleep.

In the morning - we had a nice breakfast. We decided to leave the Tesla in our covered hotel garage - free parking - and took the local bus to the stadium. It was $2 - the distance was about 2 miles. We could have walked but we are grayheads - we save our energy.

At the stadium we enjoyed the fans carrying on. I was surprised how many Eagles fans made the trip. Scalpers had tickets but the prices were really high. About 20 minutes before kickoff - a nice young couple offered us two club tickets for $100 each. The tickets had a face value of $400. It included inside bar and seating if you wanted it.

The stadium was packed. Tampa Bay was killing the Eagles. Temperature was around 70 - but it was very windy. It even had a cold rain for a few minutes. We brought raincoats. We had a light lunch there in the club room. Since it was such a beating - the Bucs fans were very happy - singing - etc.

Tom Brady - considered an old man - was excellent. I must remember he is as old as my sons.

After the game - we took a bus to Grimaldi's for pizza at the mall. Its was a nice place - but they burnt our pizza. They brought a new one for free. We ate and drank - enjoying other fans.

Finally - we called an Uber to take us back to our hotel. To our surprise - the Uber was a Tesla just like ours - but black. The driver rents the Tesla from Hertz for $420 a week - he earns enough to pay for the car and for himself. He has ordered a Tesla for himself. He seemed happy.

Monday morning - we packed and drove north on I-75. Lulu had a mall she wanted to visit. The we drove to Cross Creek - FL - to the former home of Marjorie Rawlings. It is out in the sticks.

Marjorie Rawlings - is a Pulitzer Prize winning author. She wrote "The Yearling" among many other short stories and books. Her main subject matter was Florida Crackers - these people were poor whites that lived off the scrub lands of Central and Northen Florida. She bought this orange farm and ranch around 1928 and lived there until she died 1953. She raised crops and animals - and also hire locals to tend her property. She also wrote about them. She was originally from Wisconsin and later New York - but she loved the wilderness.

It was getting late - and the Tesla GPS said we would be home by 7 PM. Beside how quiet and smooth the Tesla is - we really like the autopilot. Once on the divided highways - you can put the autopilot on - and it steers itself. It stays between the lines like I never could. Flawlessly. It asks you to keep you hands on the steering wheel - but it steers with or without you. Both Lulu and I agree - it makes us better drivers. It corrects your tendencies. We could have made it all the way home - but we do not like to drain the battery down low. At 100 miles left - I like to fill her up. It gave us a chance to pee and grab an Arby's for supper. 7 PM - we were in our garage.

What a nice 3 days. We like Leno - we enjoyed seeing an NFL playoff game - and the Rawling farm was really neat. Lulu plans a nice weekend. Our next big trip is to Houston in February. 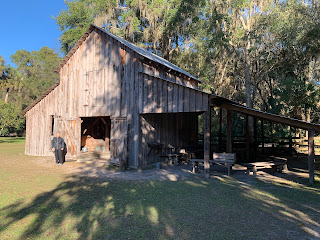 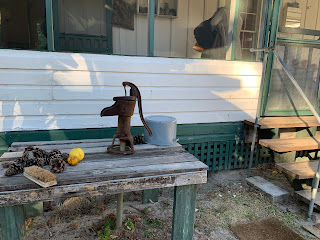 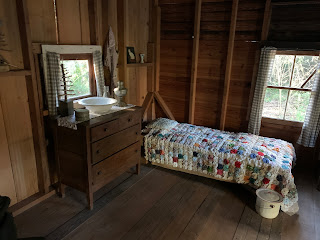 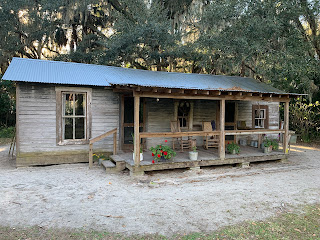 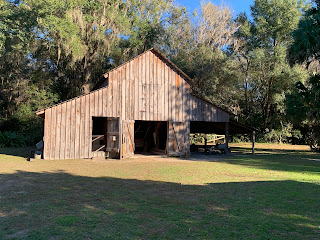 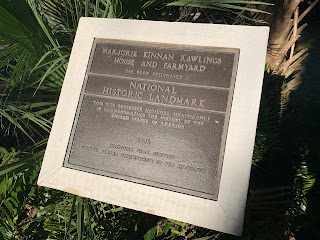 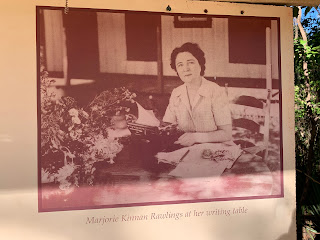 This is a review of some of the places we visited in 2021.