One of Lulu's former students from Tamaqua High School was driving from Dallas to his home near Ocala FL. He sent a text message asking to stop by for a visit. We love when friends - coal crackers - and students drop by. I was friends with Andrew's father John back in the 1960s - I have not seen him since then - but being with Andrew felt like being back home with old friends.

Andrew is a technology whiz. He has been doing web pages and operating drones way back when - before it was fashionable. He coached me into buying a Mavic Mini Drone - although he said he never had actually flown one. This led me into getting my drone out - and giving him a chance to fly it. Most of the pictures I have of Andy include him holding a drone controller and smiling into the camera.

Andrew served as a soldier in Afghanistan. He returned to Tamaqua to become very active in community projects in his hometown. He keeps a Tamaqua web page - even though he lives in Florida now.

Since I bought the drone - back in February - I was chicken to take it up too high - usually my ceiling was 200 feet. Andrew must have excellent vision because he took it up way above my eyesight. Most of the time he flew it - he did not look at the drone - he was using the screen on my iPhone to see where he was going. He commented on how easy it was to fly compared to his drone - one that he paid much more money for. My drone was $400.

Andrew took all the pictures on this page. At no time did the drone wander over my neighbors' property. I thought that was good in case it fell out of the sky for some reason. My drone controller has a button - if you push it - the drone will fly back to the exact spot where it took off. When the drone is outside - it uses a GPS to fly and is very accurate. When you take your fingers of the controller - it will stay in one spot until the battery runs out - then land safely. You can control the camera - left and right - up and down. You can steer the drone - left and right - front and back - up and down. The controller has two little joysticks.

Our guests stayed a couple hours - then it was time for Lulu to teach her Tuesday class - so they were back on the road to home near Ocala. Andrew promised to come back again - when covid lifts - and go to some FSU events with us. 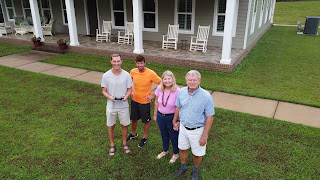 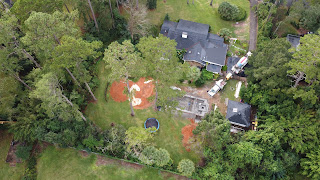 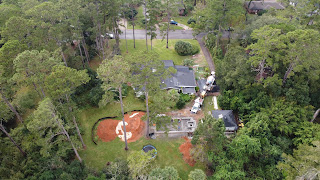 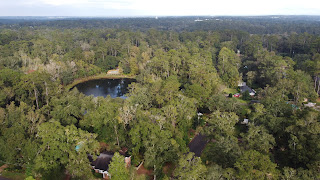 October 1st starts Golden Week in China. Today is the 71st Birthday of the world's most populous country. They have 1.3 billion people - about 4 times as many as the United States.

Last year we spent 6 months in Beijing the capital - where Nancy taught at Beijing Normal University as a Fulbright Scholar. We had a lovely apartment and enjoyed seeing China from the inside out. With so very few white faces - we were a minority but enjoyed a warm welcoming from everyone. People would come up to us on the street and welcome us - and use their best English idioms and slang on us. It was a life altering experience for us that now seems like just a dream.

I recorded this parade using my iPhone on a tripod watching our apartment television. The party went on all day - I only recorded the first 90 minutes.

We went to China in August and returned to the USA in January - right before the pandemic hit. We were able to travel freely through China to Shanghai - Nanjing - and Xian. We flew in and out of the country to Vietnam and Japan. We walked on the Great Wall. We enjoyed Shanghai Disneyworld. We had three sets of American guests that helped keep us from feeling homesick.

There are so many other places in the world to visit - I doubt that we will ever fly the 15 hours to China again. But we have good memories of the people of China to last a lifetime.