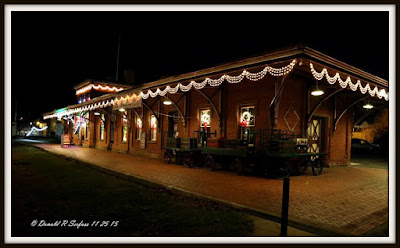 When I was a kid in the 1950s - the station was already going downhill. In the 1980s it was such a dump - someone set it on fire - it was ready for the wrecking ball. A group of Tamaqua citizens formed SOS - Save oOur Station. They raised some money and got grants from the state. Today it is a beauty mark and a memory of our youth.

In the 1950s - we used to use the old red phone booth in the lobby. You could call your girl friend for 5 cents. My brother in law - Bill Fritz - used to be a clerk for the Reading Railroad in the office there.

Now the station houses a very nice bar and restaurant.

Don Serfass produces some beautiful pictures of our area. This is one of them.
Written by Harry Everhart on Monday, November 30, 2015

After 9 Days Up North - There's No Place Like Home 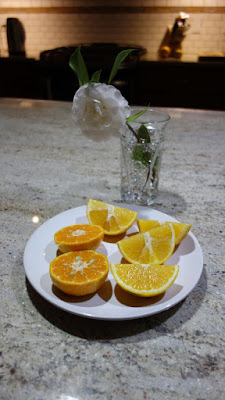 We got home two hours late last night from our 9 day trip up north. Our friend Marge picked us up at the airport - and George and Joel had us over for a Thanksgiving dinner. White camellias were in bloom and we had a few of the last oranges and tangerines on our trees for breakfast. We truly feel like this is our home now. I guess we are no longer carpet baggers from the North.
Read more »
Written by Harry Everhart on Saturday, November 28, 2015

I guess we were both day dreaming. Anyway - we missed the airport. Ended up at Rutgers!  It is like - It's A Wonderful Life - or Field of Dreams. I think We were so  unconsciously heading home to Tamaqua for the holidays.

We will catch an eastbound from here - miss our flight - and get home late.

You must excuse me now. I must find a way to turn this lemon into lemonade.

Lulu can scratch another off her list of things to do. We just got back to our hotel room after the Macy's Parade. With a little luck - we got VIP passes on the front row of the parade route at 6 Avenue and 57th St. Lulu was pretty desperate because the crowd arrived well before our 7 AM start. It looked like we would be standing in the back of the pack. I saw a nice looking guard at one of the enclaves - I offered him a $20 to let us in. He told me to go into the Wayfarer Restaurant and ask for John. John gave us two free VIP wrist bands. We were early enough to get the front row. I still have the $20.

The parade started at 9 AM and reached us by 9:30. The weather was good - lower 50s - no wind - but we were in shadows the whole time. We have two tripod stools - a bag of food and drinks - and a hotel blanket. We were set.

The parade was over by noon - it took us 30 minutes to get back to our hotel - just 4 blocks away.

Here are the pictures - I had no time to caption them or edit them. 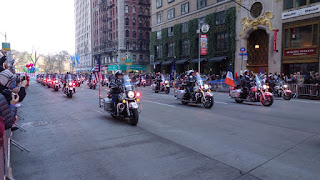 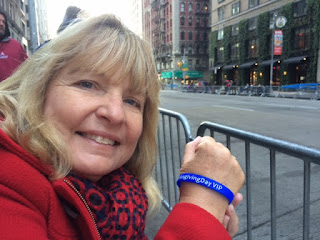 Our day started in Washington DC - when our bestbus.com left Dupont Circle - just a couple of blocks from Keith and Liz's house. We were on our way - for $30 the bus took us non-stop to Time Square in 4 hours flat. The bus had wifi and power outlets - Lulu and I each had a pair of seats to ourselves. On the busiest driving day of the year - we traveled to our Hilton on 6th Avenue - along the Macy's Parade route.

After a small break - Lulu and I lined up for Broadway tickets - we wanted to see Charles III - but most of the tickets were in the balcony - with my vision - not worth much. While on the bus - Lulu picked up a really nice pair of tickets for the Christmas Show at Radio City - tomorrow - after the parade.

Next we went up to 79th Street to see them inflating the balloons for the parade. It was really crowded but well organized as the crowd moved past the balloons. After that - we had supper at Artie's on Broadway - and then shopped at Trader Joe's for food for the parade . By 7 PM - we were back to the hotel room - getting ready for the parade.

We will wake up at 7 AM. We brought two little tripod stools all the way from Florida for the parade. We will plot out a spot at 7 AM - the parade is at 9 AM - it lasts 2 hours. I hope my bladder can stand it. I am tempted to get some diapers.

We have this hotel room for Thursday night too. Then we take the plane home from Newark arriving in sunny Tallahassee at 3 PM.  Our friend Marge is picking us up at the airport. 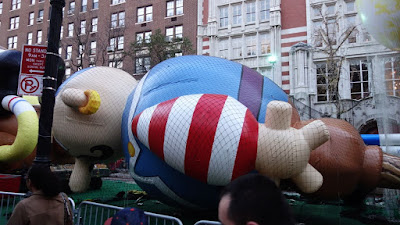 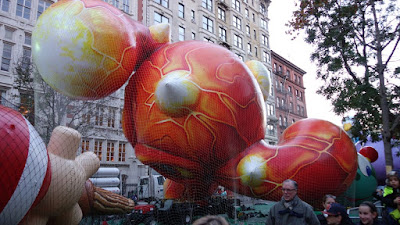 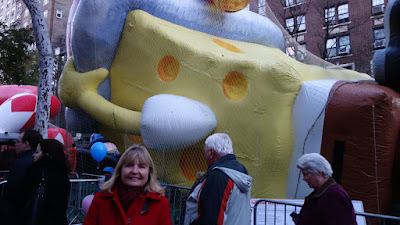 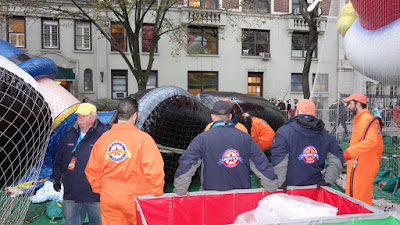 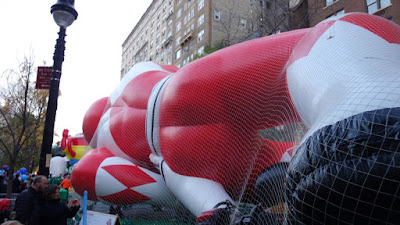 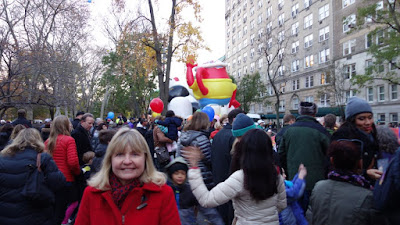 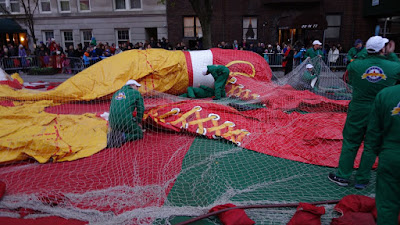 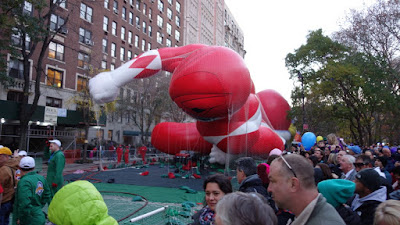 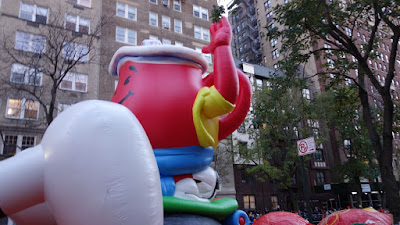 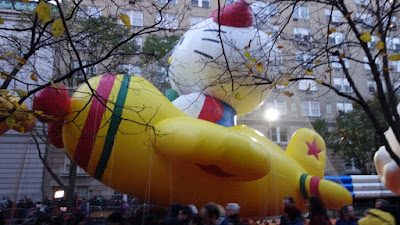 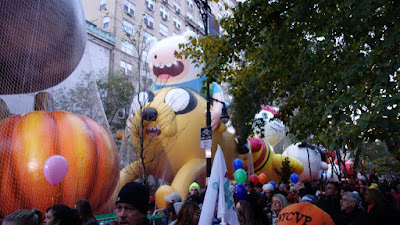 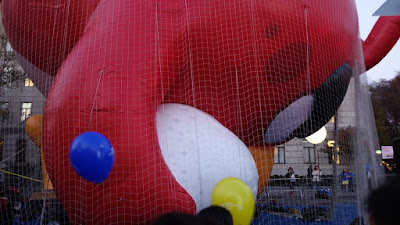 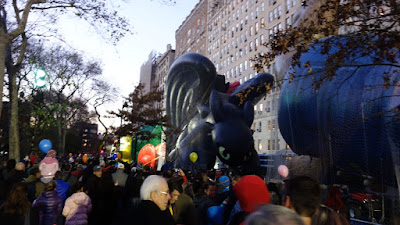 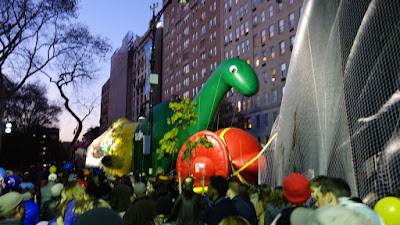 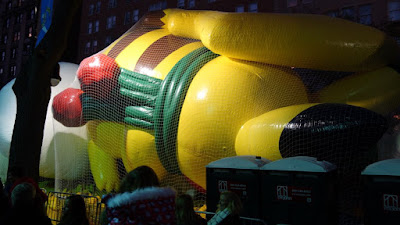 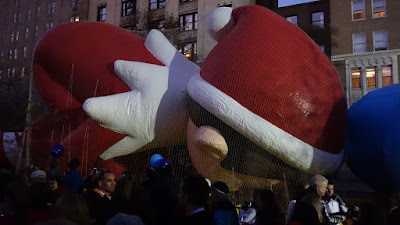 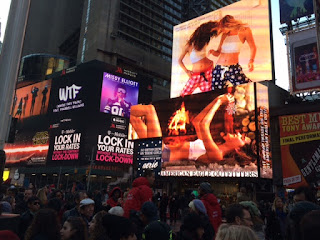 One of my favorite stores when we visit London is the John Lewis Store right on Oxford Street. It reminds me of big city shopping in my youth. To my surprise - they produced this lovely Christmas ad. Merry Christmas to all my students and friends. 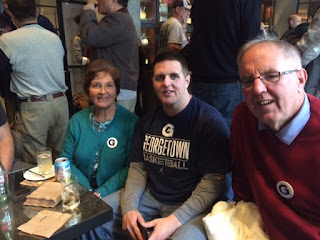 We are at an exciting game in the Garden. 10 minutes to go. Duke up by 4.
www.harry.everhart.com
Written by Harry Everhart on Sunday, November 22, 2015

Duke Versus Georgetown - At the Big Apple Garden 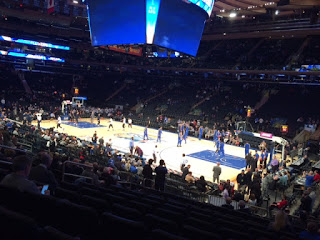 We are ready for Everhart Bowl IV. Duke and Georgetown are teeing it up at 1 pm in Madison Squate Garden. We are here with Keith and Liz. Cousin RuthAnn came with her family from Allentown.

We have very nice lower level seats. Jim Valvano once said - you know you've made it when you are playing the second game in the Garden. Since Coach K did not want to get home late - he decided Duke shall play the 1pm game - this we have train tickets to leave at 8 pm - and our game is 1 pm. Nothing like power.

It is a game we can't lose.

Duke won by 2 - Hoyas had a shot a buzzer but missed. 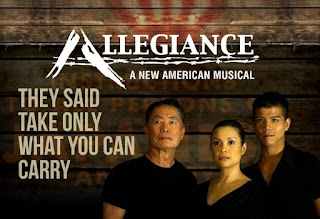 Last night we saw Allegiance with George Takei. It is a sad story about the Japanese American Interment Camps of World War II. George Takei as a child spent time there.

George later starred in Star Trek. He is also a frequent guest on the Howard Stern Show.

The play is appropriate for the currently news in America - the anti-immigrant movement. In this case - America simply rounded up American Citizen for "walking while yellow."

I doubt that the play will last long - it has virtually no sexual content. Also - America loves to forget her mistakes. 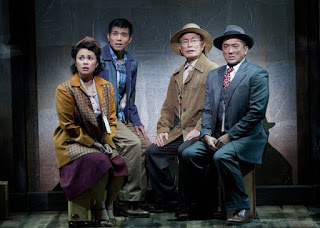 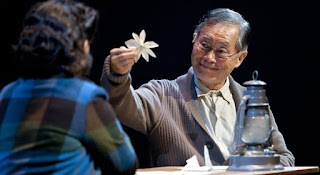 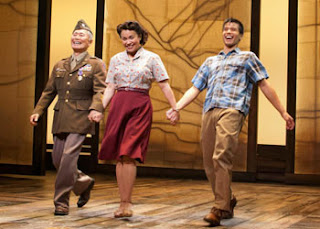 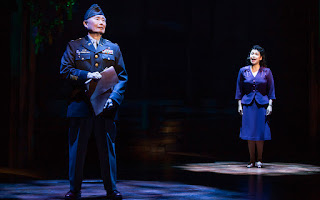 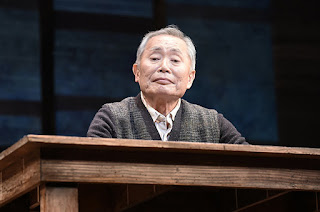 We were lucky to have a very nice weather day in New York City yesterday - 50s - 60s - sunny. It started out with a cab ride from our hotel on 52nd St down to the tip of Manhattan to see the World Trade Center. The new building is 1776 feet tall - and they have build a park and museum to memorialize the Sept 11 Attack.

After that - we shopped for play tickets. I wanted to see the play Allegiance - featuring George Takei.  We were able to get discounted tickets for $80 each - in the 10th row. Then we took the subway back to our hotel. We had lunch at another Irish Pub - then settled in to watch the FSU football game.

The game ended in time to walk to the Highacre Theatre on 48th St to see the play.

Today - we will watch Georgetown and Duke play in Madison Square Garden. Our sons and daughters in law went to those schools - and it is the first time they are playing each other in the Garden and NYC. After the game - we will catch the train from Penn Station - right next to the arena - and go to Washington DC. We will spend a few days there - and return here for the Macy's Thanksgiving Parade. Then home.