Ladies and Gentlemen - The Rolling Stones

When I first met Lulu in 1969 - I was a big Rolling Stones fan. I went to a concert at the Spectrum in Philadelphia to see them on November 26th 1969. I had won a radio show contest and got two free tickets. The price of tickets then were $7.50.

Last week - since we were already traveling to Richmond to see the kids - Lulu decided we were going to see the Stones one more time. Only 3 of the Stones are left rolling. Mick Jagger - Keith Richards - and Ron Wood. Jagger and Richards are 78 now. The drummer - Charlie Watts - recently died.

The first time I saw them - I was 21 and a senior in college. I had just purchased a brand new 1969 VW for $1600 and met the love of my life - Lulu. This time the concert cost us $860 for tickets! Either the Stone or I will be gone probably before the next one.

First we flew to Richmond to stay with the Everhart 4 there for a week. Then we took a short flight to Atlanta for the concert. We got to meet two of Lulu's students before the concert for supper - and then walked to the Mercedes Benz Arena. Our seats were very good - but in an arena of 70,000 - most of the night the band members were specks on the stage. Thanks to the big screens we saw lots of action. The sound was great along with the light show.

The most amazing part of the show was seeing and listening to Mick Jagger prance and sing for a solid 3 hours. In my opinion they are still the greatest rock and roll band ever. When I was a kid - they symbolized the counter culture. In other words - they really peed your parents off. They used to concentrate heavily on doing blue-eyed covers of American blues artists. They introduced me to Little Richard - Robert Johnson - Muddy Waters - BB King - and Howlin Wolf. They even covered a few Buddy Holly tunes. Eventually they became a more middle of the road rock and roll band.

Today - they are sort of a tribute band to themselves. As ever - there is nothing like the gunfire sound of the applause at a Rolling Stone concert. This crowd was equipped with iPhones to record the history of the event.

They did 19 songs. What was conspicuously missing was "Brown Sugar" - a tune about slave owners sexually assaulting their slaves. I wonder how it would have played in Atlanta?  Songs I liked best were - "Street Fightin Man" - "Honky Tonk Women" about prostitution in New Orleans - "Gimme Shelter" about being in the grasp of heroine - "Sympathy for the Devil" an anthem to old Lebda himself - and the finally "I Can't Get No Satisfaction" for all the English teachers everywhere.

"Gimme Shelter" reminds me of Merry Clayton. She was the original female singer on the hit. She was as old as me - born on Christmas Day in 1948. She started singing professionally at age 14. The Rolling Stones called her in the middle of the night to sing the high voice wails. "It's just a shot away." She was in pajamas and curlers and pregnant. She later played the Acid Queen in the London production of Tommy by The Who. An entire career was built from one song.

The show ended at 11:30 pm - on Veterans Day 2021. We walked to our hotel - in a little bit of shock at what we just saw. These guys did the sound track of my life. Thanks Lulu for insisting I go. 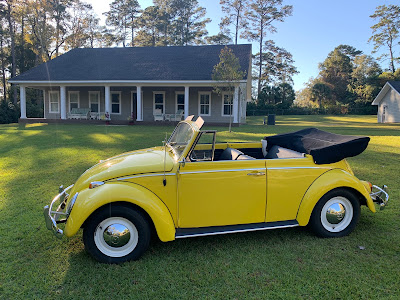 I just sold this lovely little Beetle for $8900. It was a fully restored 1965. My very first car was a 1956 VW Beetle Convertible just like this but it was green. Mine was a rolling rust bucket I bought for $100.
My friend JP built this car over the last 20 years. He spent a lot more money on it - but he loved the joy of owning it and working on it. I also sold a Jaguar V12 for him.
https://youtu.be/vagvzx11ZvI
Written by Harry Everhart on Saturday, November 20, 2021

Last week my friend and neighbor - George Dawson - traveled to Serbia among other countries - on a river cruise. He gave me this 100 Dinars note. One Dinar is equal to one US Cent. Nikola Tesla was born in Eastern Europe. He was a great scientist in the study of electricity. He came to the USA in 1882 to work with Edison's companies. Today Tesla is credited with inventing the alternating current system of electricity transfer. At the time - politics did not give him the credit he deserved. Thomas Edison favored direct current transfer of electricity. Thanks to Tesla's system - we can send electricity many miles from where it is produced. Elon Musk named his Tesla automobile after Nikola Tesla because he invented the AC Induction Motor - which is used in the Tesla Cars. Tesla died in debt in 1943 in New York. His name lives on in the car.
Written by Harry Everhart on Thursday, November 04, 2021