Florence SC - On Our Way North

We left Tallahassee about 9 AM for the trip north to see family and friends. It is the biggest trip so far in our Honda van. It took 9 hours to get here including stops for food - fuel - rest rooms. We hit some very heavy rains in South Carolina.

It was about 480 miles to here - we got 27 miles per gallon in the Honda. Our major entertainment was an audio book - Boys in the Boat - about the University of Washington rowing team going to the 1936 Olympics in Berlin.

Lulu booked this hotel online from the car. It is a Suite including a kitchen - bath - living room - bedroom for $99 total. This is a brand new hotel.

Tomorrow we will arrive in Richmond VA.
Written by Harry Everhart on Tuesday, June 28, 2016 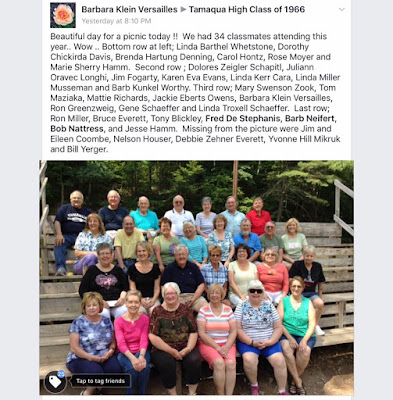 I was not there - but intend to make the September Reunion.

Comparing the Orlando Eye To the London Eye

When we were kids - we called them Ferris Wheels. When you went to the fair - or Knoebels Grove - the big wheel spun round and round and you rocked back and forth in rocker benches - and I hated it. But it was a great place to take your girlfriend - maybe steal a kiss at the top.

Today a series of super wheels have become popular. They are called observation wheels. They are gigantic and they spin slowly - about once every 30 minutes. They seldom stop - you even step onto the cars while they are moving.

Neither the London Eye nor the Orlando Eye is the biggest in the world. That claim belongs to another wheel in Las Vegas - 550 feet high - probably called the Casino Wheel or Trump Wheel.

The 440 foot high London Eye opened in 2000 was at first called the Millennium Wheel. It has evolved through many namings by different owners - it is currently called the Coca Cola London Eye. The Orlando Eye started spinning in 2015. It is 400 feet tall.

Helicopter Ride Over DisneyWorld On Our 45th HoneyMoon

I do not have a bucket list - but I am 68 and Lulu and I never had ridden in a helicopter. We have had several chances in national parks - but you know how tourists whine about noisy choppers ruining the beauty of the moment. So Lulu had purchased the tickets on line - I could either go or lose the money.   So off we went - flying over one of the places we love best in the world - Disney's Land.

The ride was only 15 minutes long - we were going about 110 MPH - at 500 to 600 feet above the attractions. We flew over Disney Village/Downtown Disney/Disney Springs - several hotels - EPCOT - Disney Hollywood Studios - golf courses - and Typhoon Lagoon Water Park. We did not invade the air over the Magic Kingdom - but you could clearly see Cinderella's Castle.


This family just did a circle and landed right away.

This is our soft gentle landing.

Yesterday was our 45th wedding anniversary - my bride Lulu was at the Library Convention.  She left me with -  check out the scooters and you know best - get what you want. With that task - and a scooter carrier in the hitch receiver of our Honda van - I waded thru the I-4 traffic from Disneyworld and Winter Park.

In 1980 - we lived in Winter Park for a year - where Lulu earned her Masters at the University of Central Florida. She took a nice job in downtown at the Winter Park Library - I guess it was her first real professional job. The downtown in Winter Park is beautiful - a slice out of old Florida - Europe - and Rodeo Drive in Hollywood. The quaint little train station is beautifully restored and actively used. While I was there yesterday  - 3 passenger trains stopped.

On Orange Ave - in downtown - is Vespa Orlando. I walked in to see Bruce Albertson at the counter. He was expecting me - he already read my weblog. He knew what I was shopping for - he knew that I have had scooters over the last 50 years. We swapped stories because store traffic was slow. He paused every now and then for calls and customers. But most of the time we were talking about scooters in general - Vespas in particular - and how they fit in life.

Good Morning From The Orlando Eye

June 24th - We are in Orlando celebrating our 45th wedding anniversary. I just took this picture from our Fairfield Inn hotel room. Lulu was all dressed up - and I just took her to the Convention Center. One of her favorites is the American Library Association Convention. A few years back Lulu was the president of AASL - a branch of the ALA.

Last night we had dinner at the Palma Maria - Lulu surprised me with a helicopter ride today - which will happen about 6 PM. The ride will only be 15 minutes - it circles Disneyworld. With all our travels - and adventures - We were never in a chopper.

Watch here for our pictures of the flight tonight.

We just got back to our hotel room after a wonderful night at the Palma Maria. Lulu and I wanted to take one of her best students to dinner to honor her being hired to open a brand new school library. From that it all went uphill.

First we had a wonderful dinner - I had chicken parm - Lulu had eggplant parm - and Sandi Jimmerson had manicotti. A wonderful fresh salad accompanied our entres - and the pasta sides. The meal had an exclamation point of peanut butter and banana cream pies. I forgot about the wonderful bread and the two loaves tucked into a bag for the ride home.
Read more »
Written by Harry Everhart on Thursday, June 23, 2016

Supper With Jon Proechel at His Teak Neighborhood Grill - Near Disneyworld

We had a wonderful supper at the Teak Neighborhood Grill owned by our friend Jon Proechel. It all started in 1980 when we moved to Orlando for a year so that Lulu could get her Masters at the University of Central Florida. While she studied and worked on campus - I stayed in an apartment complex with a 3 year old and a 2 year old. There I met Bob Proechel and his family. He had kids the same age as ours. We all became great friends - taking trips together - visiting teacher other's homes - etc. Bob went from pumping gas at Shell to many multi-million dollar business. It seems that his son Jon has not fallen far from the tree.
Read more »
Written by Harry Everhart on Thursday, June 23, 2016

Lulu and I - 5 Days at the Poor Man's Hawaii - Orlando 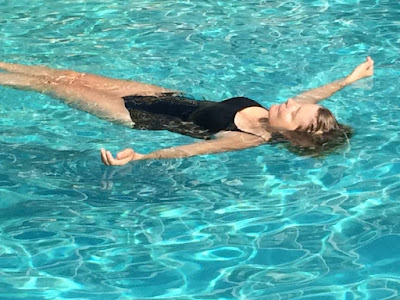 We just drove the Honda Van south for the American Library Association convention. For the next 5 days it will be nothing but "buns and bifocals."

Of course the first place lulu goes is the pool - she can still float.

Our anniversary is Friday - number 45. They said it would never last.

Thursday night we will sit at the Tamaqua Table at the Palma Maria - 6 PM. We are taking a special guest.

We will be heading north at the end of the month to see the latest Everhart - Max.

It goes with the territory. When you marry a pretty girl 6 years younger than you - you can expect a life of jokes about people thinking you are a father and daughter team. In 4 days - we will be married 45 years. Our sons and their families live in Richmond and Washington - so it is nice when they call early and we videochat in the morning. After that - Lulu takes over - making every holiday special.

In a few days - we will be driving north to visit the Everhart 9. It will be the first really long trip in our new Honda van. My Fathers Day gift will help make the trip special. Lulu got me a special refrigerator/freezer that will keep our travel treats cold. This is not some cheap thermo-cooler. This one will keep ice cream frozen all the way down to 0 degrees F. It also has an adapter to keep running on 120 volt power in hotels.
Read more »
Written by Harry Everhart on Monday, June 20, 2016


My friend died so his wife asked me to sell his beautiful camper. It is a 2012 Ford Coachmen Concord Class C Motorhome. It is like brand new with only 15,000 miles on it. It sleeps 4 comfortably in 2 queen size beds.

It is on a Ford E-350 chassis. It has a V10 engine with 4 speed automatic transmission with overdrive. It has Michelin tires. It has power windows - power steering - power brakes. It is equipped with a trailer hitch receiver that is rated at 500 pounds/5000 pounds. The hitch package has a skirt to prevent rocks from flying up. It has a giant outside storage area that will hold 2 bicycles. It has roof air and engine air. The 15 feet by 8 feet awning opens and closes by the push of a button - no support rods needed. There are outside outlets for AC power and cable TV. It has a rear view backup camera. 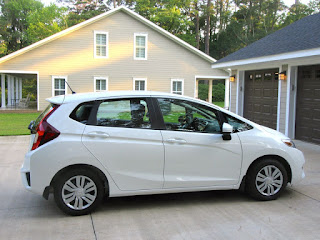 The Honda Fit is a great car - small on the outside - big on the inside. It is peppy with a 130 HP engine and a CVT transmission.  They have a rear camera - power windows - power locks - disk brakes.

It sold for $14,000 - that was a real bargain. We did not get a lot of inquiries or shoppers. I expected it to sell faster.

We drove the van south to see the Zimmermans in Zephyr Hills FL. We stayed two nights in their lovely home. Friday night we all ate supper in Ybor City at the Columbia Restaurant. I had a Cuban Sandwich at this historic place.It reminds me of the places we visited in Cuba.

Saturday morning we got up and drove the van to Clearwater to see some scooters at the Vespa dealer. We drove one - but not the model we wanted. I was disappointed that we drove 60 miles to see it but not get to ride it. We stopped at the Yuengling Beer Brewery on the way back to the Zimms. After a hot dog at Mel’s - we relaxed and swam at the Zimm's pool.