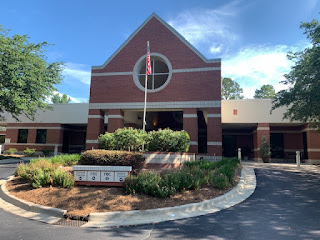 I am having surgery at Tallahassee Orthopedic Clinic on Tuesday. I have arthritis in my fingers. They replace my joints with plastic ones. This is the third one for me. Pretty soon I will not be able to pick my nose.

TOC has operated on many famous FSU athletes. They have also done spinal surgery on my wife.

This is a very routine operation that will be done on an out-patient basis. 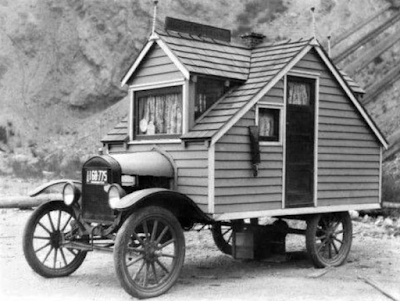 I love this camper. I will buy it and let it sit out in front of our house. Better yet - I think I will rent out on AirBnb. Boy - will that pee off the neighbors. We could also tailgate at FSU games in it.
Written by Harry Everhart on Wednesday, May 29, 2019 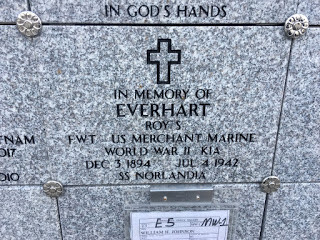 I never met my grandfather. He was killed in action in the Atlantic by a German U-boat before I was born. He was a Firemen in the engine room in a Merchant Marine cargo ship - the USS Norlandia. He was killed instantly. The government posthumously awarded him 4 medals. His memorial is at Indiantown Gap National Cemetery. His body was never recovered - it is 5 miles deep in the Puerto Rican Trench - along with the ship. 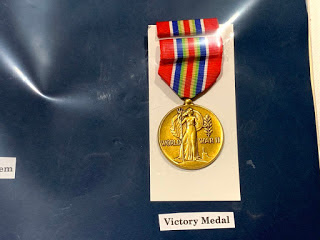 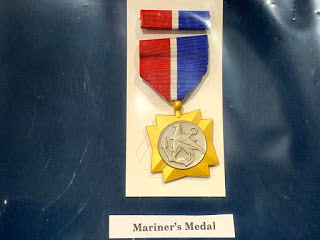 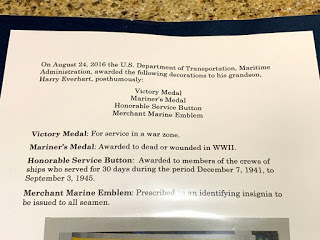 It Appears My Web Site Is Good In China

The Internet is heavily censored in China. They call it the "The Great Firewall."

You can go to this page -

So I am guessing I will be able to post stuff to my web page. We will see. 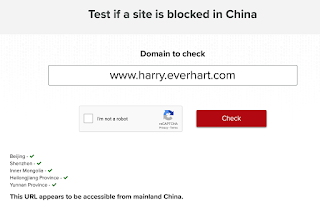 The Department of State announced that Dr. Nancy Everhart has been chosen as a Fulbright Scholar to study in China.  The award will extend from September to February.

Everhart has been a professor of library and information science at Florida State University in Tallahassee for the past 15 years. Before that - she was a professor at St. John's University in New York City for 10 years. She started her career as a school librarian in the Tamaqua public schools in Pennsylvania.

She graduated from Tamaqua Area High School in 1972. She earned her Bachelor of Science degree in Library Science from Kutztown Univeristy in 1975. This was followed by a Masters in Educational Media at the University of Central Florida in 1981. She completed her education with a PhD in Library Science at Florida State University in 1990.

Everhart is the author of five books and over 100 articles in the field of library science.   She has been awarded over $2 million in federal grants for her research in establishing model school libraries while building exemplary school leaders. She has made presentations on all the continents except Antarctica. She teaches a summer course in London at the FSU Study Centre. She has taught summer courses for the University of Hawaii - the University of North Carolina - Indiana University - the University of Arizona - and the University of Georgia. Recently Germany awarded her a DAAD Fellowship to study at Humboldt University in Berlin for 3 months.

Through her studies - she recently visited her 50th state - Montana. She has made presentations in the countries of England - Scotland - Ireland - Sweden - Germany - France - the Netherlands - Greece - Dubai - Canada - Kuwait - Brazil - Hong Kong - and Australia.

February Valentines Day - May Mothers Day - June Anniversary - July Birthday - December Christmas - I call them the big 5. They are my turns for showing appreciation for all the lovely things Lulu does for me.

The day started out with a pair of blue plastic Birkenstock sandals followed by a breakfast in bed. My scrambled eggs are nothing to write home about. My original plan called for taking the camper to Panama City Beach and supper at Hofbrau House - but the weather report showed terrible storms the entire day there.

With some quick thinking - I found some 6th row seats for a Mothers' Day final show of Mamma Mia at the Quincy Music Theater. Qunicy is about 20 miles west of Tallahassee and on the road to the beach. The weather was already festering - so I grabbed our umbrella and away we went.

Quincy is the county seat of Gadsden County. They have an old town square right along US Highway 90 that holds the county court house. The theatre almost fronts on that square. Our friends own a restaurant on the square called Delfino's. They make great farm to table meals. It has become a landmark. They were not opened Sunday.

We paid $17 a seat - senior citizen price - and the theatre was full. There was also a full orchestra pit - you could tell the band enjoyed rocking All the music was original and scratch. The cast was made of mostly housewives - with college and high school students. Many have a long history in theatre. Everybody did a great job. It is nice going to a show where you know the story and the music. The songs were from the 1970s group - ABBA. We saw this story in the movies. We went to the show in London and on Broadway before.

It is fun seeing today's kids sing the old songs and do the dance steps we were brought up on. They really did the routines well and seemed to be having more fun than I ever had on a dance floor. I shot a short video of the show's title tune - Mamma Mia. I particularly liked the dancing style of one of the cast - a little blonde in blue and white. I would have told her how much I liked her performance in the lobby - but I would have felt like a stalker - she was about 17 - and I am 71. She reminded me of someone I knew at 17 :-)

The show started at 2:30 and at 5:00 we were out the door. You could tell it rained quite a bit - but it was dry then. Our car was parked right out front and we headed home.

We stopped at Steak and Shake and had steaks and shakes. It reminded me of a date I had about 50 years ago. Lulu and I had our first date - 50 years ago. It followed a date we almost had. In August of 1969 - I had a new brand new Volkswagen - and asked Lulu's Mom if I could take Lulu to Woodstock. In honor of Mother's Day - Lulu's mother would not allow it - so I went without her. On the way home - our sons called to wish Lulu a Happy Mothers Day. Lulu called her Mom and did the same.
Written by Harry Everhart on Monday, May 13, 2019 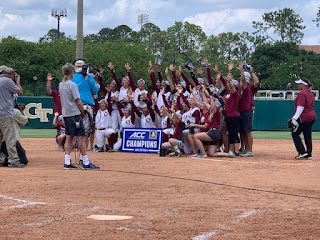 We have owned this 2004 Roadtrek 190 for two years. We have slept in it 25 nights. When we camp - we like to keep the rear bed made up. Normally the rear bed is made of 6 cushions. They are about 4 inches thick and in good shape. But we do not like sleeping on the cracks. So we figured we would get a custom mattress for the back. The rear bed is 72" x 72" x 6 " - certainly an odd size for a mattress. Nobody has them that size on the shelf. If we wanted a custom made one - they wanted $600 to $1200. That was too steep for us.

We found a place called the Foam Factory. They offered a California King Mattress of HD35 Foam - not the soft memory foam - but a pretty dense block of material. It was 84" x 72" x 6" - for $175.00. We had ordered one before of Memory Foam. We did not like the softness and sent it back. We do like this HD35 Foam.

What is interesting is that they send these foam mattresses - stuffed into small boxes. What they do is put the mattress in a bag and suck the air out. When we had to send the Memory Foam back it was really hard getting it back in the box.

Foam Factory said it is easy to cut with any serrated knife. I started with an electric knife but half way thru it got really hot. My wife then took a normal serrated knife and easily finished the 6 foot long cut.

We carried it out to the van and enjoyed the perfect fit. We have a friend who is good with a sewing machine. She is making a new set of curtains for us. I will try to get her to make a nice mattress cover or fitted sheet of the same curtain material or color. 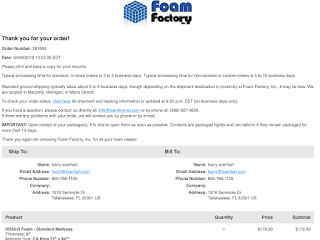 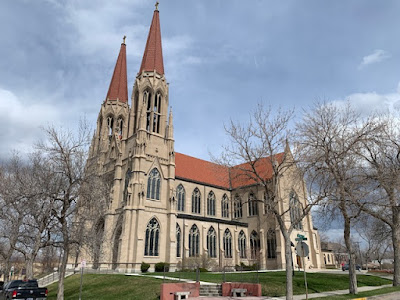 The Cathedral of St Helena. 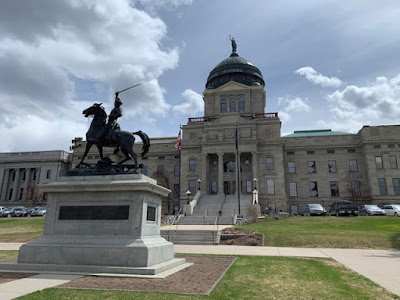 We enjoyed spending two nights in Helena. It is the capital of the state - but it was one time the richest per capita city in the world. Helena has about 20,000 people and is one of the smallest capital cities in the USA. A gold rush brought people to Helena. Out of the mines under this small city came $6 billion worth of gold. Gold is still being found there.

When Montana became a state in 1892 - Helena was chosen because it was so rich. They built a lavish capitol and cathedral. The cathedral rivals some of the best in Europe. It certainly has the most stained glass I have ever seen.  It is still in perfect condition. The door was open - we walked in - we had it to ourselves.

We are in Montana for 10 days - Lulu has been doing a presentation at Montana State University in Bozeman. After that - we have been exploring one of the last two states on my to do list. Custer's Last Stand has a special interest to our family.

Lulu's great grandfather fought at the Battle of the Little Bighorn. It has been duly documented in books and government files. William Heath was born in England. He enlisted in the army and served under Custer in Montana. He was a farrier - his job was to care for the horses.

Custer was sent into Montana to force the Indians onto the reservation. Gold was discovered in the area and the government wanted it open for prospecting. The Sioux refused to leave the area. They had a camp of 4000 people along the Little Bighorn River. Custer attacked the village with about 300 men. The battle raged for 2 days. In the end - Custer built a small fort made of about 40 horse bodies on top of a small hill. They desperately killed their own horses to use as protection. The Indians attacked and killed every one of the soldiers - supposedly.

William Heath somehow survived. He supposedly was nursed back to health by a women named Lavina. After he recovered he returned to Girardville and eventually Tamaqua. There - he married Mary Swansbury - and raised a family of 7 kids. One of those 7 kids was Ruth Heath - Lulu's grandmother - and mother of John Cox - Lulu's Dad. He named one of his daughters - Lavina.

Heath lived - worked - and died in Tamaqua as a miner. He is buried in the Veteran's Circle at Odd Fellows Cemetery in Tamaqua PA. He never claimed a military pension. He died at age 40.

The battlefield is located along highway Interstate 90. A monument was placed there a few years after the battle in 1876. Today - there is a full national cemetery there for soldiers of other wars.

The curator at the monument produced a book listing all the people that died there. They list William Heath as a farrier and that he definitely died there. Everything in their background of Heath matches the family records up until the battle.

This is personal to me. I am proud that Lulu's great grandfather fought for his country. But I do not think he died here. It is a government mistake. He returned to Tamaqua and started a big family - Lulu included. They are all proud of his history. It is politically correct for the government to say the Indians massacred them all.

If any other member's of Lulu's family would like their name listed in this story - send me an email. If you have any other information - please include it.

I am glad William Heath survived and returned to Tamaqua PA - because if he died - my Lulu would never have been born.