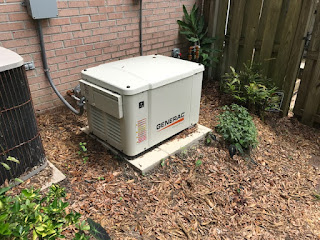 It is a whole house generator - Generac brand. It can run everything but the whole house AC. I think it cost about $6000 installed. Much of the cost was the interface with the house. It is nice because it comes on automatically and turns off some circuits.

It runs on natural gas so you never have to put fuel in it. It comes on every couple days to exercise itself.
Written by Harry Everhart on Monday, July 31, 2017 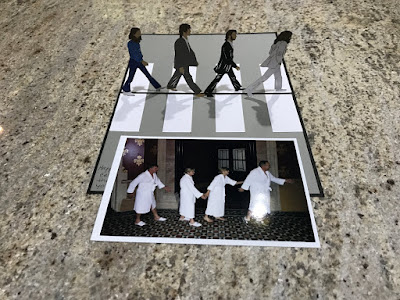 4 years ago we spent July in London with Jan and Dick Davis. We were at FSU Campus - they were at the San Pancras Hotel. They invited us to what was easily the most over the top hotel we have been in. Dick is a Marriot boy so he has "points."

Anyway - we put on these 4 robes - and paraded through this "high tea" lobby to the grotto in the basement. It was our poor attempt at a Beatles pose. Dick looks like Jackie Gleason - "And away we go!"

We loved that day and will cherish it forever. 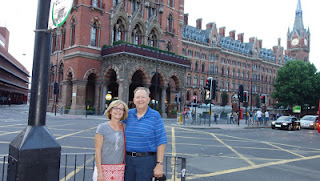 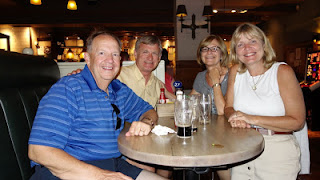 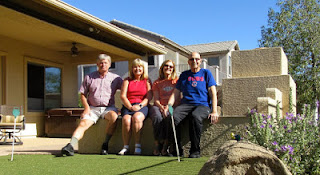 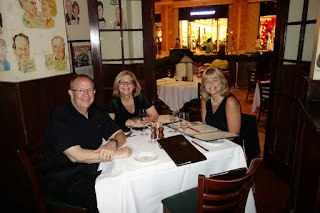 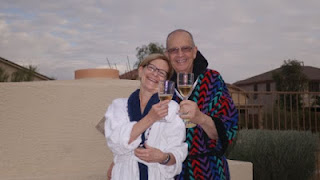 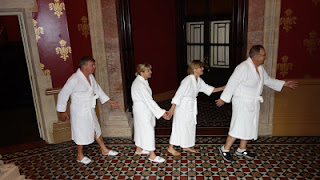 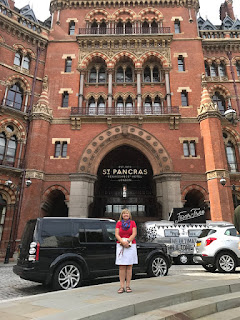 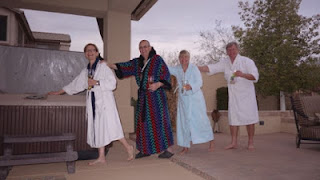 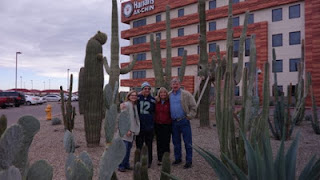 Abbey Road is about a mile from our apartment. It would have been a shame to come home without seeing it.

Abbey Road Studios has been in continuous use since 1931. George Martin worked there as a producer over 10 years before he signed the Beatles to record there in 1962. The studios are quite large - some of the recording rooms being as large as a basketball court. The Beatles recorded all their albums there - some with a 100 piece orchestra.

The road has been made famous by the "Zebra" crossing out front. For the Abbey Road album - the Beatles posed crossing the street. 50 years later - people come to Abbey Road just to pose for that crossing. You are not allowed to go in the studios without permission - so it has become a pilgrimage for people to come here and stare. They let you write on the courtyard wall - although they repaint it every 3 months.

They said that the Beatles would never last. They recorded together for about 10 years. The music lives on and people come here to show their love. I was 14 when I bought my first Beatle's album for $2.49.  I remember playing it over and over again - like yesterday. It is fun seeing generation appreciate the music - the Beatles did some wonderful new things with sound.

There is a small store next to the studio where you can buy all their recordings and other trinkets. I was surprised to see a complete Beatles set of their songs selling for 50 pounds - heck we paid more than that for their music 50 years ago - and I was only making $1 an hour working for Morris Heisler.

Many other musicians recorded at Abbey Road. King Edward VI made his famous "Kings Speech" in this studio. He was the stuttering king.

LONDON - A Tale Of Three Buildings

Yesterday we visited three buildings - Grenfell Tower - Victoria Palace - and The Shard. Two were in various stages of destruction. One was built new in time for the London Olympics.

We rode the subway to all 3 buildings.

The tower was built in 1974 - about the same year at the Tamaqua Hi-Rise. In 2015 - they did a renovation on the building cladding it with insulation and aluminum. It was built under Parker Morris  Standards - but the recent renovations did not bring the building up to current standards which would include sprinklers. A refrigerator caught fire on the 4th floor - and the new renovation acted like a chimney spreading the fire. The residents were trained to stay in their apartment until help arrived. The building is 24 stories tall.

No one knew officially how many people lived in this government housing. Many residents illegally subleased the apartments. About 300 people lived there - 80 bodies have been found.

The area is reeling in the sadness of the moment.

Victoria Palace is an old theater next to Victoria Station. For 10 years - our favorite play made this theater its home. We have seen the play many times about a boy who wanted to become a ballet dancer to leave his coal region home.

They have recently leveled the whole block where the theater stood. They have saved the front facade for a new theater.

You can pay $25 to go to the observation deck at the top of the building - or you can choose to go to the several restaurants and bars on the 80th floor - and get a similar view for the price of a drink. Drinks range in price from 4 to 20 euros. My glass of Cornwall Cider was 5 euros. Lulu and Joan had martinis - and had to be carried to supper. We had dinner at Giusippes near the foot of the building.

We have one day left in London. We are looking forward to The Carol King Show for our last night in town. We fly home Friday.

All pictures and video taken with an iphone 7.

Watch Lulu almost miss the train. We took the train to Windsor Castle.

Today we went to Windsor Castle - didn't we just visit there last August? Yes - but if you got your tickets stamped - it was good for a year - so here we were. We took the train from Paddington Station - it took about an hour.

The queen has a bunch of palaces - but Windsor is her favorite. She liked it so much that she chose Windsor as her last name. There was a stink - because when she married Philip - he was of German ancestry. No one in England wanted a German prince - but she married him anyway.

Windsor Castle is so big - it is in town and in the country. One can walk out of the one gate into the center of town - and to the west you see miles of royal farm land.

On the tour - you go through about 20 formal royal rooms. You do not go into the queen's private residence.

We enjoyed a beautiful day - 75 - sunny - no rain. We enjoyed some royal ice cream on the grounds.

Changing of the guard.

GREENWICH - Monday At The Maritime Museum

FOOT TUNNEL
East of downtown London about 8 miles is Greenwich. It is the home of the Royal Naval Observatory and the Maritime Museum. This is also the home of the Prime Meridian. All of the measurements on the earth are measured from here. For example - Tamaqua PA - is 78 degrees west of Greenwich.

In travel - two rules I like to follow are -
1. Getting there is half the fun.
2. A good trip is more who you travel with than the destination.

To get across the river to Greenwich - there is a foot tunnel that is 110 years old. It is about 1/4 mile long. You go down about 5 stories in a spiral staircase or elevator. Then you walk through this nine feet diameter iron tube that is lined with tiles. You cannot see from one end to the other since the tunnel bows down under the river. The first time I went it seemed much scarier than this time.

The Maritime Museum is oriented to school groups and a rewriting of British Naval history.

We took the subway - bus - train - all using our Oyster Card.