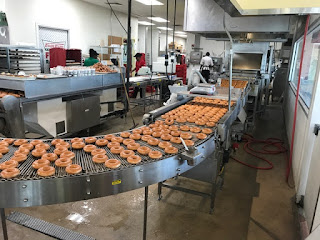 FSU beat Marshall 7-0. The number 3 Seminoles opened the season with 5 straight victories. We are looking forward to a wonderful season.

Lats year they made it to the college world series.

What a beautiful February day in Tallahassee - the temperature reached 80.

Monday night - FSU girls basketball plays Texas here at 7 PM. Watch for it on TV. The girls basketball team is ranked number 4 in the nation. They are 22-2.
Written by Harry Everhart on Sunday, February 12, 2017

69th Birthday With Friends and Family

69 is a big number for me. It was in the Summer of 69 that I was a life guard at the Bungalow Pool in Tamaqua - where I met a 15 year old girl in a bikini. I asked her out on a date to a concert in Woodstock NY. Mother Betty did not let her go - but I came home and told Lulu all about it. She was amused and 2 years later we eloped to Miami Beach and spent the summer there. We returned to Tamaqua in the fall.

Monday was my 69th birthday. I officially retired 14 years ago on my 55th. My lovely wife Lulu has made the last 14 years the best of my life. When you are old and senile - the last day is the best day - and the last people you meet are the best. People are very forgiving of your faults.

The best present was when Carl and Marylou Zimmerman chose to drive up from Tampa to spend a few days with us. We had so much fun. We went to a basketball game - the car museum - the Tallahassee Museum - shopping in Thomasville GA - and sausage sandwiches at Bradley's Country Store in Georgia.

Monday started out with a before game supper with George - Joel - Joan - Carl - Marylou - Lulu and me. Lulu made a big pot of German brats. Then we had my favorite lava cake with ice cream. This was followed by the FSU girls pounding visiting Miami.

A real highlight was a visit to Devoe Moore's Auto Museum. Besides giving Florida State $50 million - DeVoe loves old cars - and has a shop on the premises that does full restorations. The collection also includes a diverse collection of radios - boat motors - dolls - farm tools - toys - motorcycles - knives - you name it. For $15 - you can enjoy until your eyes glaze over.

I have already lived 3 years beyond my Dad. I feel healthier than ever. We do not know when our time is up - but I feel like I am in the gun lap. Lulu has us going 100 miles per hour - things are flying by.

Our next adventure is March 1st to March 19th. We will be in Spain then circling the Mediterranean Sea on a cruise. We will be in Barcelona Spain - Valencia Spain - Majorca Spain - Marseille France - Savona Italy - Naples Italy - Palermo Sicily - and finally Malta. We hope you follow along on this webpage - and I hope I can keep up with Lulu. I carry her bags. 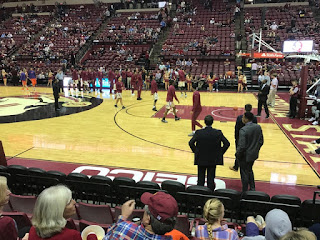 We sat right behind Clemson's bench. They sold 10,500 tickets - but there were plenty of empty seats.  We paid $20 each for the tickets outside. We could  have gotten in for $5 a piece - but paid extra for the nice seats.

Monday night our girls play Miami ay 7 PM. Carl and Marylou Zimmerman will go to that game with us. 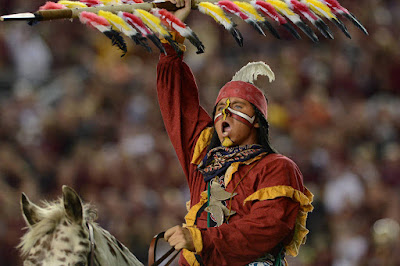 From the Daily Note.

The letters of intent are in, the signatures are on the dotted lines, and everything has largely wrapped up for National Signing Day 2017. Not surprisingly, Florida State finished with yet another top class, signing 24 players to finalize a sixth place national ranking.
Fans typically don’t get to know everything about every recruit, but we at The Daily Nole attempt to do so. This year we bring back one of our fun pieces from last Signing Day, where we attempt to hand out superlatives to various members of the 2017 recruiting class. Find out who we chose this year:

Most Likely to Contribute Next Year

Cam Akers, RB
The best player in the class is also the most likely to contribute in 2017. Akers comes into a backfield that has one proven player (Jacques Patrick) and a group of unknowns. One of these unknowns is technically Akers, but his skill set is so impressive that he’s almost certainly going to be getting major reps by the end of the year. Barring any injury or off-the-field troubles, Akers will be active from the start of the very first game.
Runner-ups: Bailey Hockman, Adonis Thomas

Most Likely to Switch Positions

DeCalon Brooks, LB
Many forgot that Derrick Brooks’ son was in the class, mostly due to his very early commitment date (Aug. 8). Brooks is a low 3-star that would not be a take in usual classes, but he still provides interesting options for the FSU staff. He is listed as an inside linebacker, but he simply does not have the size FSU looks for in the linebacking corps, weighing in at just 5-11 and 197 pounds. Brooks will likely shift to the secondary, where he has a good chance of playing roles like the “Money” or “Star” positions that are present in the current defensive scheme. He likely won’t see the field for another year, but he could turn into a steal if developed properly.
Some would have put Hamsah Nasirildeen here, but he’s technically an athlete who could play multiple positions. Brooks fit the letter of the name better.
Runner-ups: Hamsah Nasirildeen, Tre Lawson

Most Likely to Redshirt

Tre Lawson, DE
Everyone knew when Lawson committed that he was a project. FSU defensive ends coach Brad Lawing is a fantastic coach who has proven he can get the most out of his players. If he thinks a prospect has potential, it’s best to trust his judgement. Lawson is 6-6 and 240 pounds, and his highlight tape shows how strong he is at the point of attack. He still needs to refine his technique and fill out his frame before he is ready to contribute. He could conceivably get converted into a defensive tackle if the staff likes how he progresses there. Regardless, taking a redshirt is his best course of action for Lawson at this point.
Runner-ups: James Blackman, DeCalon Brooks

Cam Akers, RB
Don’t put too much stock into this superlative as last year’s winner was quarterback Malik Henry, but it’s still interesting to debate. The Heisman Trophy has largely become a quarterback-running back award, so whoever is the most talented of the offensive commits is likely getting the nod. Cam Akers fills this role pretty well. He has arrived in Tallahassee as a better player than Dalvin Cook was at the same point. If he lives up to his potential, he’s going to be the unquestioned starter by the time he’s a sophomore.
Runner-ups: Khalan Laborn, James Blackman

Adonis Thomas, LB
Thomas appears as a 3-star junior college recruit in Florida State’s listing. But when he was coming out of high school, Thomas was a 4-star linebacker and a top 200 overall player. He still has the prototype size of an inside linebacker, and he was good enough that Alabama offered and signed him the first time around. Thomas is going to immediately compete for playing time and will likely be seeing rotation early in the season. Florida State has a lot of talent in the linebacking unit, and Thomas will be yet another impressive addition.
Runner-ups: Tamorrion Terry, Zaquandre White

Ontaria Wilson, CB
There still exists some debate around the reasoning for extending a scholarship to Wilson. He had very little exposure prior to Florida State discovering him, and many still think that he was given a scholarship solely because of his more well-known teammate, Tamorrion Terry. But after reading about Wilson and looking at his tape, he does seem like the type of player that simply got overlooked — mainly because he didn’t particularly focus on getting his name out there. He’s a lengthy cornerback who has enough athleticism to turn into a starter at the next level. It will still be interesting to see how he pans out when practice begins and if he takes a redshirt or not.
Runner-ups: Tamorrion Terry, Tre Lawson
Written by Harry Everhart on Saturday, February 04, 2017 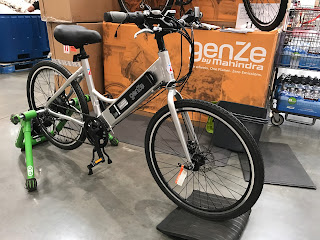 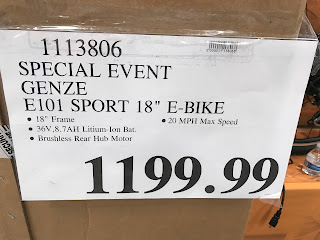 While visiting Costco yesterday - I stumbled onto a very nice electric bike.

I own an electric car - had a golf cart - electric scooters - and another electric bike. As you get older - having a motor to assist you along makes a lot of sense.

Simply - this bike has a 250 watt electric motor and an 8 amp hour battery. It powers the bike at about 20 MPH for 20 miles. You can pedal along and go farther - or turn the motor off and just pedal.

The bike is on sale for $1200 - normally $1500. Electric bikes can be purchased with high price tags -some over $10,000. The GenZe bike is made by Mahindra - a large firm in India. Parts and service are available. There are good reviews on youtube.

The bike only weighs 47 pounds with battery. It would be easy for lifting onto car racks or into campers. The battery can removed from the frame with a key. If one drove the bike to work - they could charge their battery in the office - protecting it from crooks. The lithium battery is a big part of the price.

I am tempted to buy 2. Lulu says she would drive it to work. There are protected bikes paths from our house to her office. She can't go on them with her scooter. 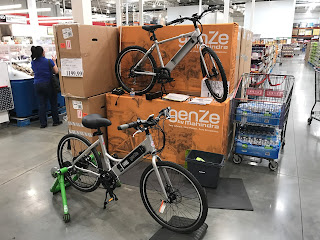 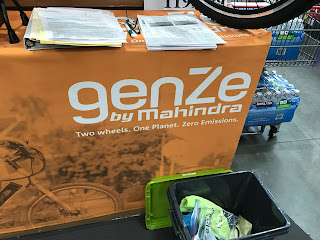 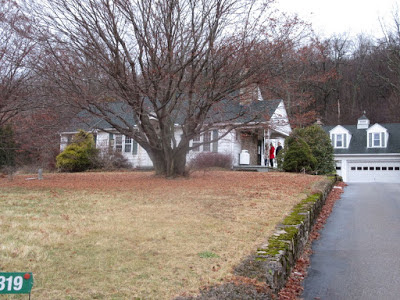 Spring Time in Florida - Turns A Man's Fancy to Campers 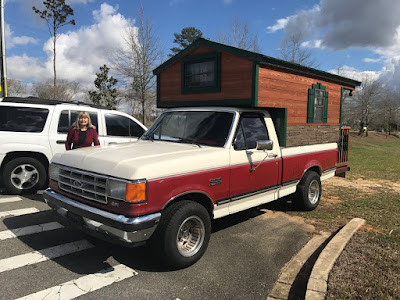 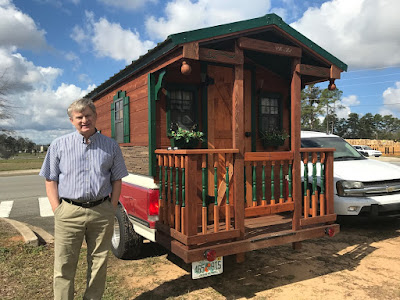 Lulu and I were going to lunch and a little shopping at Costco. As we were parking - we noticed this cute little truck camper parked by a construction site. We stopped the car to take a few pictures - hoping the owner would notice us - and maybe we could get the story. No luck.

I am guessing a carpenter made it from scratch. It looked custom. I did not get the story yet - but in Mom's world - the guy works on the building project and lives far away. He stays in the camper on weekdays - and goes home to his family on weekends. It is all an assumption. At any rate - it is a nice truck and truck camper. I doubt that it has much plumbing or heat.

Lulu loves to watch those "tiny house" TV shows. We were ahead of our time.We lived for 30 years in 1000 square feet in Tamaqua PA.
Written by Harry Everhart on Thursday, February 02, 2017 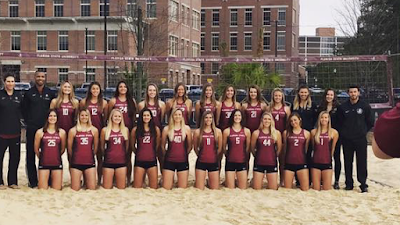