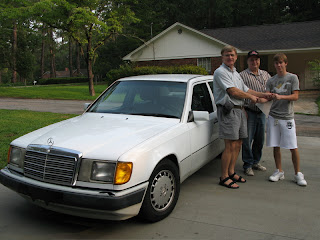 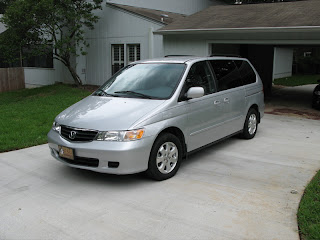 You have to love Craigslist.org. If you have not used it yet - maybe this story will perk your ears a bit.

A few months ago - I bought this white 1990 Mercedes Diesel on craigslist - the free classifieds web page on the Internet. I will not say how much I paid for it - but I put lots of hours of work into it - intending to set it up to run on cooking oil. Since I have the attention span of a gecko - and figured that I did not drive enough miles to justify the project - I decided to buy another car. Nancy put her foot down and said I have too many toys. So I had to sell one to buy another.

This morning Craig and Jay Case - from near Stennis Rocket Center in Mississippi bought the car. After I listed it on craigslist with 4 free pictures - I got over 15 calls for the car and 20 e-mails asking about it in the 24 hours after I listed it. One guy called from Los Angeles saying he was going to fly to Tallahassee and drive the car home over I-10. Craig and Jay arrived in town late last night and stayed at the Motel 6 about 1/2 mile away. This morning they arrived like clockwork at 8 AM with a brown bag containing the cash. We went for a test drive and they loved it. They are now cruising over I-10 to their home near Gulfport MS.

But I said it was a "triple witching deal." Yes - I bought that Mercedes on craigslist a few month back. The owner was right here in town. Did I say that it had 215,000 miles on it before the odometer quit?

Finally - the third part of the deal. Again on Craigslist.org - I bought this 2004 Honda Odyssey EX-L van. It has leather inside - power sliding doors - even a DVD TV system.

I will keep you informed on how they van works out - maybe we will go for a "quadruple" Craigslist.org deal.

Click on the title of this article to go to Craigslist.
Written by Harry Everhart on Tuesday, August 07, 2007