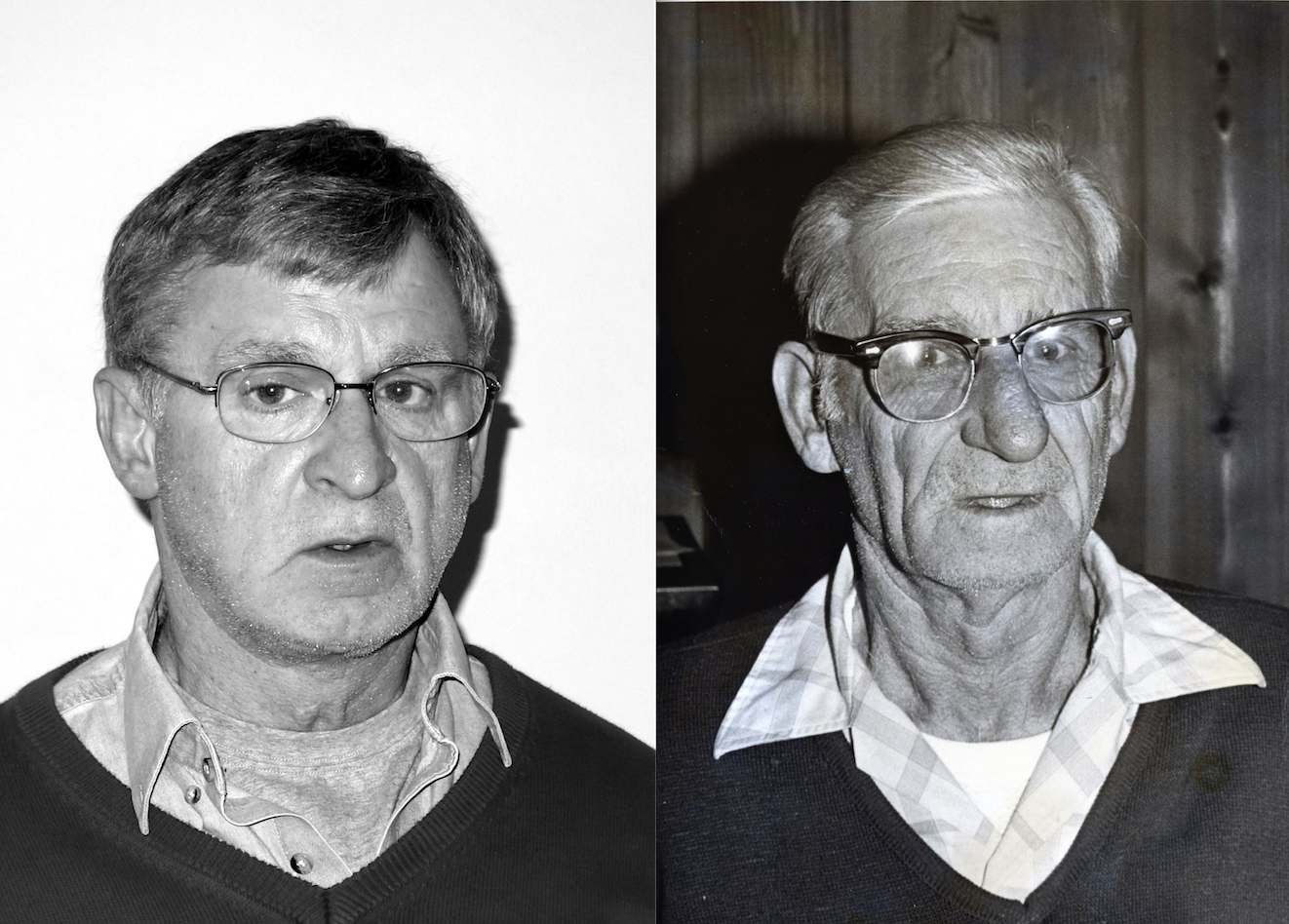 My Dad - Harry "Hap" Everhart died 2 day's after his 66th birthday on April 4th - 1982. For a while I dreaded this date because today I am 66 years and 2 days old. Lulu got out the camera and took this picture of me today. I wanted to compare it to the last best picture I have of my Dad.

He was born April 2nd -1916. He had a hard life - but never complained. He did not talk about touchy feely stuff so I can only imagine how he felt about the cards he was dealt in life. He was born in Palmerton PA where his Dad - Roy - was a carpenter.  They later moved to Seek a small patch town - some call it the Capital of Coaldale PA. His Dad was a carpenter in the mines and they rented a company home. When Dad was 7 - his Dad decided to leave the area. Some say he went to look for work - others say he just went. My grandmother Mammy was left with 4 kids under 7 in a company home and no means of support - there was no social security then. The company big wigs came to throw the little family out - but after some begging - they relented as long as the oldest son promised to work in the mines.

Dad went to Coaldale High School - and even jumped a grade to finish sooner. He graduated in 1934 - and immediately walked down the hill and took a job working in the Number 8 mine. From 1934 to 1959 - he sold his soul to the company store - faithfully giving his life to the Lehigh Navigation and Coal Company. When the mines closed - he was 43 - with no marketable skills. It didn't really matter because there was no work in the Valley for anyone. People were making a mass exodus south and east to Philadelphia and the Lehigh Valley. He obtained a manufacturing job near Philadelphia - 90 miles from home. For 15 years - I had a weekend father. 4 of us stayed home in Tamaqua - he spent 4 nights a week in an apartment over top of a gas station on US Route 1. When that plant closed - he moved back to Tamaqua to be with his wife who continued to work in a local mill.

In 1978 - he hit the "Big Time." He was broke - and had a long wait until Social Security benefits kicked in. After a 4 year wait - and many doctor exams - he was awarded "Black Lung." His lungs were full of coal dust after 25 years in the hole. He received a check for 5 years of back pay - about $18,000. That is when I took the above picture of him. He seldom posed for anything - but this picture was going to the federal government. He was 62. For the rest of his life he would get social security and black lung.

I have led a sheltered life. I like to call myself a coal cracker - but I can't re-call ever working hard. Dad wanted me to be a teacher - so I went to Kutztown State Teacher College. In 1970 I graduated and got a job teaching at Panther Valley - which included Coaldale PA. My dad's friend - Steve Martinec - became the principal there - and his old job as science teacher was available. Just a few days before opening day - I signed a contract for that job at $6500 a year.

Fast forward 33 years - I spent a lifetime of never having to work a holiday - a night shift - a weekend - or a summer. I retired when I was 55 from the same place I started. I married Lulu - build a new home from a kit - had 2 great sons - and seldom had dirt under my fingernails.

Now after 11 years in sunny Florida - I am in excellent health - and just completed building our dream home here. The day is half over and it seems like I am going to make past my Dad's tenure.

I have done a lot of looking forward and looking back in the least few days. I see my son's being successful and am so proud of the grand kids. They have two brilliant and beautiful wives. My Dad would have been so proud of them all. He did not even dare dream his kids would go to Georgetown and Duke. He valued education so much - he would have be ecstatic with Lulu just being promoted to full professor.

Thanks to Lulu - I have been all over the world. We spend July in London every summer - for years we used to spend a month every summer in Hawaii. Lulu became president of one of the American Association of School librarians. She can choose wherever she wants to go. We have visited 30 countries and almost every one of the United States.

My Dad loved to travel. He spent 10 years as a Boy Scout Master - taking his troops as far as he could on his two week vacations when the mines closed down. My Mom used to say that the Everhart's have Gypsy blood. Thanks to Mom - Dad - and Lulu - this coal cracker has been living the dream - and after 12 more hours - everything else is gravy.