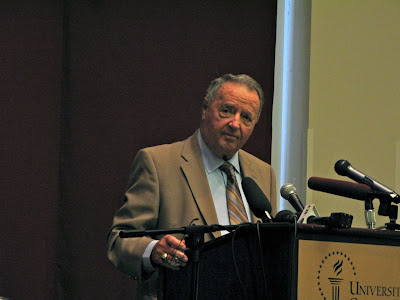 Every Monday morning Bobby Bowden has a luncheon at 11:30 for anyone that wants to pay $15 - have a great lunch - listen to Bobby talk about the game - go over game footage - and sometimes have a few personal words with Bobby while he signs a picture or ball. Son Keith and I went today - I took this picture - got a nice front seat.

Today - it was pretty sad. Besides having just been beaten by rival Florida this weekend - some folks are contemplating forcing Bobby into retirement. To compound the anxiety - tons of news camera were set up to possibly capture Bowden's swan song and resignation.

Bobby started off by saying that nothing has been settled. He discussed his future with President Wetherall and Athletic Director Spetman this morning and probably will have an announcement and press conference tomorrow. Imagine having such a monumental decision being made by a rookie athletic director and a president that was one of your football players who has already announced his own retirement.

Bobby had heavy bags under his eyes - but the weight of this decision had not affected his sense of humor. After being told that his team may play undefeated Cincinnati in a minor bowl he quipped, "I hope you all have a good time at that bowl - I may not show up."

Bowden has not had a losing season since his first season in 1976. His team currently has a 6-6 record needs a bowl victory to keep his string of 33 winning seasons intact. Besides two national championships - 14 ACC titles - 14 years of finishing in the top 5 in a row - his 1999 team was ranked number one from the first AP poll to the last - a record that can never be beaten.

Even though he had an interview scheduled for 1 PM - Bobby took 10 minutes to sign items for a long line of people - almost like a death watch. Each person was able to have a little small talk with him while he signed - a chance to brush up against history. Bobby signed a picture for Lulu and put me in a little playful headlock. I am 61 and gushed like a little boy .

My guess is that Bobby will announce that he is coming back for one more season (boy was I wrong here!) and that he will retired at the end of the 2010 season when FSU would have to pay Jim Fisher - his named replacement - a $5 million bonus - if not named to the top job. Who signed that stupid deal?
Written by Harry Everhart on Monday, November 30, 2009

It will be strange not seeing Bowden on the sidelines for Florida State; he certainly had a phenomenal career and will be missed by the fans