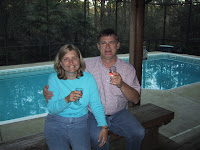 Lulu loves to swim. Her dream has always been to live in Florida and have a swimming pool in her back yard. I like to think that she wants to re-create the scene from 1969 when we met . I was the life guard up in the chair and she was the pretty teenager in a bikini. So when I retired and FSU came a courtin' - the first home that the realtor showed us with a pool won Lulu's heart.

I used to like to swim - but after many years of life guarding - I got sick of it. A perfect day to Lulu is lying on a beach - be it Alligator Point or South Beach Miami - all slathered up with lotion and just watching the waves. I can take that for about 20 minutes - then I must find do something - even if it is only installing aluminum siding.

So we bought this house with the dream pool - way to big for the yard. It is 20 x 40 - with an 8 feet diving well - surrounded by a screen enclosure to keep the tons of pine needles and live oak leaves out. The pool has a gas heater - that we seldom use. Lulu had visions of heating the pool all year - after all we were living the high life in Florida now.

We moved into the Florida pool house in March of 2004. The water temperature was 60 degrees. After checking the gas meter - I flipped on the pool heater. A blast of hot air came out of the top of the heater - that smelled like money. So we went to bed with visions of the Australian crawl dancing in Lulu's head. All night long I had nightmares of dollar bills flying out of the pool. In the morning - the pool was a toasty 80 degrees. Lulu was living her dream all the way up to the my screams coming from the side of the house as I read the gas meter. It had cost me $50 for that one little 60 to 80 degree one-day episode. Probably the most expensive swim we ever had. When Lulu tried to get out of the pool - I yelled - get back in there - it is the warmest place in Florida.

Since then the reality of pool ownership has hit me. Just turning 60 - I have a desire to make less work for me - less things to maintain - less fees to pay for upkeep. My new motto is, "Less is more."

If I had my way - I would fill the pool with dirt and plant corn. Maybe I could do like Nixon in the White House and put a bowling alley over the pool.

The liner in our pool is old - the pool was installed in 1991 - and the liner is probably the charter member. Two times we have had leaks in the liner. First time - the pool guy came and used a little electric thing to detect the hole. Last time - he could not find the leak - but was sure a new liner would fix it. So right now the pool is empty. We are deciding its fate.

If it were up to me - the pool would be gone. But Lulu makes more money than I do - so she gets more votes. The Plaza Tower Condos are looking better and better every day - especially the apartment on the 7th floor - southwest corner. But getting that past Lulu seems impossible - that and the terrible status of real estate sales in Florida.

Lulu wants to just get a new liner - and keep all of the same problems. That causes a stiffening in my chest.

On the other hand - I would like to cut down on upkeep. In a perfect world - I would have a concrete gunite pool - about 3.5 feet deep with a flat bottom. It would be easier to clean - use less water - less chemical - less upkeep. The water would warmup quicker due to it being shallower and having less volume. We also could play volleyball and basketball in the pool - rather than just sit there and look at it. But the lowest quote I could get for that solution is $15,000. My laziness for cleaning the pool is only eclipsed by the faces I make when I have to open up the deep pockets of my wallet.

A compromise would be to have the pool filled in part way by sand - and have a new liner made to my shallower specs. Lulu would still have her pool - and I would have less water that would be easier to care for - easier to vacuum - and would stay warmer. And maybe - just maybe - some day I would flip on that switch to the gas pool heater without having an anxiety attack.

What do you think? Any ideas would be appreciated? Can this marriage be saved? Send advice to - harry@everhart.com
Written by Harry Everhart on Thursday, February 21, 2008

My brother in law - Jack - sent this reply about my pool story.

Hi Harry, I just read your post on the pool situation. Well, I think I
am the best person to ask if you want someone to agree with that can
honestly say they've been "down that road." I don't know if you knew
that when we lived in our last home in Alabama before moving to Virginia
that it had an in-ground pool the exact same size (20 x 40) as yours.
It actually was 10 ft. in the deep end with a diving board. This pool
also had a vinyl liner. We bought the home in 1996 when it was two
years old. The pool had a huge wood deck and wood fence surrounding it
(another maintenance nightmare), but that's for another time. At the
time Celia was 5 and Celeste was 3 years old.

Well, common logic tells you that a pool doesn't add value to your
home. If it does it's usually 25% max. So if you think having a pool
will greatly enhance your property value then you're crazy. Karen, (who
by the way hates water), was actually the one who was pushing me into
buying a house with a pool. This was encouraged by her sister Pam who
had a pool at her home and who's husband by the way kept it up. I think
it was mainly sisterly competition and status symbol thing if anything,
but you'll never get that out of Karen.

You'd think me being the Northerner cold climate person that I'd be the
one pushing the pool after spending many short two month cool swim
seasons growing up in PA. I knew the pitfalls of a pool like the liners
wearing out, constant cleaning, chemicals and people "dropping in" to
swim during the summer and never seeing them again. Also, I worried
about our small children somehow getting inside the fence and drowning.
Another big problem was on the weekends our kids wanting their friends
over to swim. In a lot of cases their parents just dropped them off and
then Karen and I had to worry about them and watch them; quite a
liability in this day and time. I could never sit around the pool and
relax and enjoy myself. To top it off I bet I saw Karen in the pool a
total of 6 times in the six years we lived there! Wow what a value
added amenity!

Well, we went thru the leaks the last two years we lived there with the
liner and also the constant maintenance. I had the filter pump go out
and also had to constantly add lots of water due to the hot summers and
rapid evaporation. Our water bill was ridiculous. Between the
chemicals, extra water and the electricity cost of the pump constantly
running; we could have joined the local health club and used their
facilities far cheaper and with a whole lot less stress and worry.

Then the big kicker. In 2002 I was offered a job in Virginia. As you
know this was not too long after 911 and we were in a recession. Real
estate sales sucked; sort of like now. We couldn't sell the house. We
had it listed with the real estate and had several showings. Actually,
the pool was a liability in selling the home! More people don't want a
pool than do. We moved to Virginia in May of 2002 and were forced to
let them home sit empty, or rent it. If we let it sit empty we would
have to keep the utilities on, keep the pool filter running or keep it
covered and all green, (another great selling feature). I would have to
pay someone to keep the grass cut and maintain the property, etc. If we
rented it we'd have to worry about the pool care since most people do
not know how to properly maintain a pool, especially renters. We would
also have liability with renters and the pool, etc. Well, we choose to
rent the home, although that about killed me. The home was basically
new and now we're 600 miles away. Fortunately, the couple we rented it
to were older and their kids were grown. He transferred to AL to manage
the local Lowe' store. Two years later we were lucky enough to have a
friend of ours who worked at the local hospital sell the home for us.

In the meantime we had several pool leaks, a scorched liner from
improper chlorination, the tenant’s constantly calling us about how to
"fix green water" and wanting rent rebates for chemicals! To top that
off the buyers negotiated a new pool liner for $1,500.00 from us off the
already ridiculously low asking price of the home.

So, that's my pool story! The two happiest days of one's life is the
day they get a pool and the day they get rid of a pool!