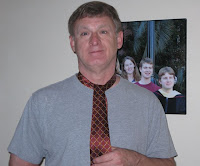 The Trailing Spouse is turning 60 today and it’s a good time to reflect. In pondering a theme for this guest column, I was inspired by a female comic I saw on HBO recently. Her routine had the theme of “Men Don’t Change.” What are the changes (and non-changes) in my trailing spouse over the thirty-eight years since I’ve known him? The first thing that comes to mind is wardrobe. Harry is still wearing short-sleeved button-down oxford shirts that are usually bought in lots of six. One change is that he saves the time spent going to a store and orders from L.L. Bean. There was a period in the seventies when they just could not be found and we spent numerous shopping trips in frustration, having to resign to the polyester blends with long pointed collars that were “in” at that time. That probably won’t happen again in today’s online marketplace where you can find anything. Cars, tools, and electronic gadgets still figure prominently in occupying his time, but the focus isn’t on having the newest first but rather on getting the “best deal.” It’s somewhere between a hobby and an obsession.

Beyond the superficial of toys, clothes, and hair (which also hasn’t changed – luckily for him), there are personality traits that haven’t changed. Probably his best trait is that he is still an independent thinker. In the 80’s the school newspaper did a feature on him “Rebel With a Cause.” I somehow forgot what the cause was, but no matter, it was something he believed in at the time and there have been many causes throughout the years. In his twenties he sued the local school board for violation of the Sunshine Law and won, serving as his own attorney. A few years later he served on the same board and was elected president. I’m probably where I am today due to the fact that he took two sabbaticals for me to get my master’s degree and doctorate while he played “Mr. Mom” never caring what others thought. It was pretty radical in the 80’s.

Our first date might have been going to Woodstock but my parents wouldn’t let me. But in typical Harry fashion, he told me later that Woodstock was a sloppy, muddy, mess and he couldn’t wait to get home. He’s never romanticized it. Nor has he ever romanticized teaching – simply saying it was a way to make a living for our family. But he was probably the best teacher in his district. He’d rather eat a hamburger and shake than go to a gourmet restaurant and attend a Tallahassee Little Theater play rather than a Broadway show. I know I’ll always get a straight answer and an honest opinion.

Happy belated birthday Harry! You have not changed at all since I met you in that small town in Pa. A great friend and always true to your word!