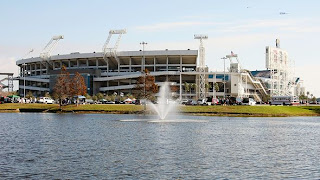 It's the hottest ticket in the history of the Gator Bowl.
And perhaps even the hottest one ever in the Bobby Bowden Era – including all of those Games of the Century and national championship contests from the 1990s.
When a legend retires, people want to be there to say "goodbye."
"This is unbelievable," said Rob Wilson, Florida State's Director of Communications.
In less than 24 hours since the West Virginia-Florida State matchup became official on Sunday evening, the Seminole ticket office had over 17,000 "ticket requests." Florida State is allotted 13,500 tickets.
The Gator Bowl itself, which is responsible for selling the 50,000-plus tickets that aren't given to the participating schools, sold out on Sunday night in a record two hours.
"The interest in this game has been overwhelming and has surpassed all expectations," said Dan Murphy, Gator Bowl Chairman.
From Florida State's perspective, FSU Director of Ticket Operations, Patrick Martin, said he could only remember one day that even approached Monday in regards to bowl ticket sales.
In 1998, the Seminoles were ranked fourth in the nation heading into the final weekend. But Miami upset UCLA and Texas A&M stunned Kansas State in the Big 12 Championship Game and just like that, Florida State had been vaulted into the Fiesta Bowl, where it would play No. 1 Tennessee for the national championship.
That 24-hour period is the only one even remotely comparable to the one the Seminole ticket office just experienced on Monday.
"It's been insane," said Jerry Kutz, Vice President of Marketing and Communications for Seminole Boosters. "It really has."
Written by Harry Everhart on Tuesday, December 08, 2009